Send the hippie back to LA

The first installment of an extended interview with musician, actor, and COME label head Emmy Collins. 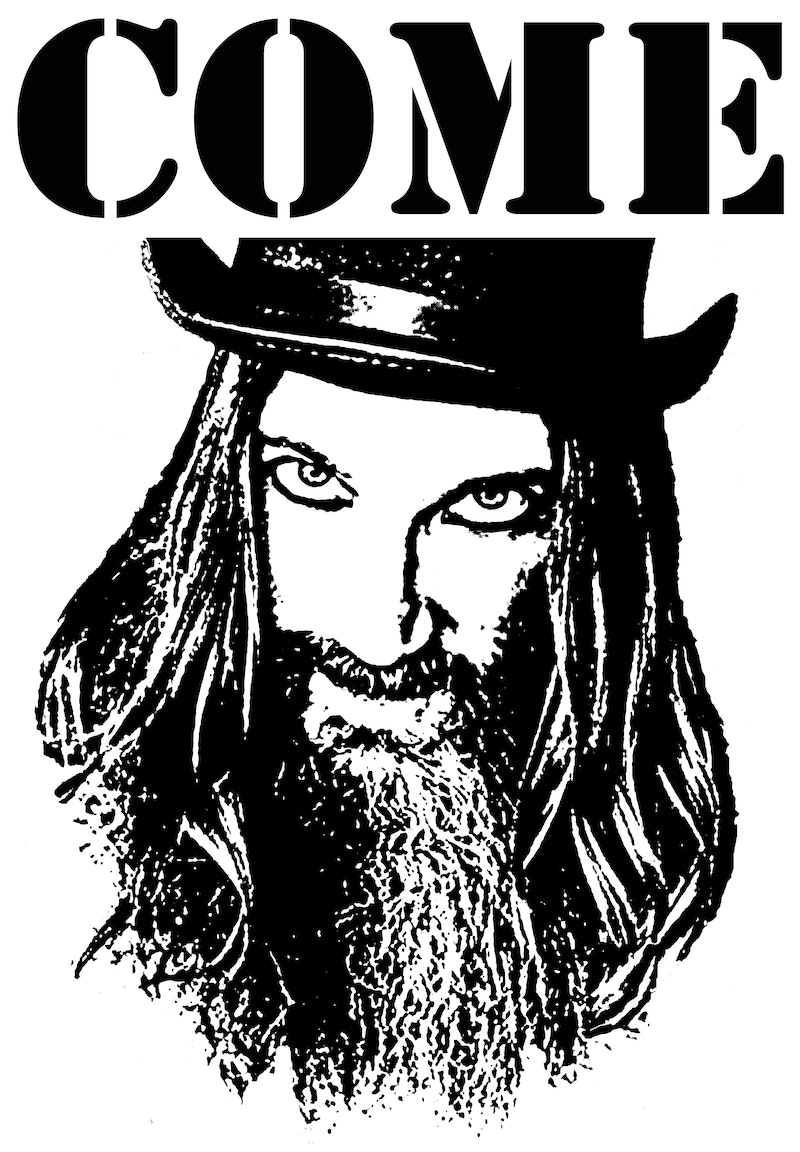 Musicians starring in or making cameos in movies isn’t anything new, but how many musicians hit casting calls as a way of making a living, and how many of those musicians spend their spare time cranking out querulously surreal, challenging cassettes and CD-Rs that walk a fine line between defiant, strident anti-music, felonious tape-experiments, and eyeball-crossing noise? That’s California multi-media misfit Emmy Collins; when we began correspondence some weeks ago, my intent was to focus on his primary musical endeavors, but ultimately our discussion was as meandering and tangential as his beard is.

(Sample a cut from Brutal Poodle, one of his main projects, here.)

Pecker, visual art, adventures in 1980s radio, and more encompass the first part of our extended conversation with Collins.

Splice Today: I'd like to talk about your various musical projects and guises—but first, do you consider yourself a musician or an actor first?

Emmy Collins: This may come off as a bit pretentious, but I consider myself an artist first—what initially attracted me to filmmaking was that it encompasses many art forms including still photography, moving images, writing, music, acting, painting and architecture. Most of my pursuits come under the guise of “art,” a touchy word because of its subjectivity.

Beginning in 2005, after acting in Paul McCarthy's La La Land Parody Paradise, I became more aware of artists, such as Joseph Beuys, Hermann Nitsch, Gunter Brus, Otto Muehl and the Vienna Actionists. This really freed me up to go more primal and big with my own art and I have created Gallery Gulch on my property in Pearblossom, California. Gallery Gulch consists of large paintings, combines, installations, and shotgun art which I cure in the harsh desert environs until done. Marshall McLuhan said it pretty accurately: “Art is anything you can get away with.”

That said, acting and filmmaking is how I have paid the bills the last 16 years. I really enjoy acting, as it’s a blast to play the deviants, from Jesus to a Junkie, that I'm often asked to portray. Playing “music” by/with myself along with Brutal Poodle, Hernia and Balj is perhaps the most enjoyable thing I do. I'm totally in the moment, time often stops and I can't think about anything else while I'm doing it. It’s stellar since we can try anything, mostly with no pre-thought and I have never felt as comfortable/disturbed playing with any other musicians.

ST: I just looked you up on IMDB, and it blows my mind to realize that you were in Pecker; I have to confess that I wasn't a huge fan of that movie, but it's the only John Waters film I've ever seen, and I may have to rent it and watch it again for your cameo. What do you remember about making that movie?

EC: I got a call from Pat Moran's assistant, John Strawbridge, saying there's a part in the new John Waters' film as a “hippie vegetarian” and that I was really right for but that I would still have to audition in Baltimore. I was living in Hollywood at the time but one of my brothers was working for a major airline so I got a free flight to go audition. The shoot was great; after breakfast the actors rehearsed the scene with Waters and his crew. Waters had us walk through the scene by the cash register and told us to improvise action and dialog up until our scripted lines. He was very professional and efficient, made a few tweaks and broke us for lunch. My two scenes went very smoothly and the other actors, including Edward Furlong and Brendan Sexton III, were way cool to work with. Waters was amiable, took pictures with me and signed my script with: “Eat meat or Die!” When I was wrapped for the day, he yelled out to the crew: “Send the hippie back to L.A.!” Oh, and I do like the flick, it's a kinder, gentler John Waters movie. I rubber-stamped my headshots: “Fresh Off John Waters' Pecker!” for casting submissions when I returned to Hollywood.

ST: And you were on an episode of Passions! My wife and I watched that constantly for the first few years we were together, before the writers went off the deep end and everything just got too fucking improbable.

EC: All right, Passions! What a nutty show. “Time for Martimmies!”

ST: What was the first band or project you were involved with, and what did you sound like? How old were you?

EC: I used to draw logos for fake bands I wanted to be in throughout grade school. As a huge KISS fan, I wanted to be the new Ace Frehley in KISS2! My first semi-actual band was called The Pumpkin Stuffers, with Mark Sharp, Paul Bandhauer and Brian Coyne. We were based out of Hemet, CA, and I was 19 years old. We got our name from the young girls we hung out with whom we called “pumpkins” because they always had to be home by midnight.

ST: Do you remember your earliest experiments with music? What were they like?

EC: One of my earliest experiments with music/sound involved shooting a transistor AM radio with my BB gun when I was eight years old in Hemet, CA. I would tune in a station, shoot the radio in various spots including the speaker, and listen to the music disintegrate and eventually fizzle out. It was a strange and fun activity, especially at such an early age. Many years later, I started recording the radio shootings on cassette tapes. I'm now shooting guitar amplifiers with .22 caliber rifles and shotguns in the California desert, and would have to say my current aural adventures are a direct evolution from being an often left-alone kid having fun with everyday objects in a sleepy retirement community.

Around the same age, I used to hear voices in the wind and in mechanical hums and noises, such as the washing machine, dryer, and cars driving on our street. I still think about the things I heard to this day. Was that inspiring, or do I just need psychological help?

ST: I get the sense, then, that you hear music everywhere, in everything—that, in a sense, perceptually, the radio's never really switched off for you.

EC: Interesting how you put that. I worked in commercial radio for four years (1986-1990) and my adage is: “I like music too much to be in radio.” While working in radio, you are always listening to someone else's finished product and if you don't like that product you are shit out of luck and it can drive you nuts. So as long as it's my radio station, in my head, I can put up with it and hopefully get some cool ideas/concepts out of it.

ST: What kind of work did you do in radio? Did the experience ruin the airwaves for you?

EC: I started as an intern—or radio class at Grossmont Junior College credit—in promotions at a San Diego, CA station in 1986. My job consisted of putting up banners and passing out stickers at local concerts along with filing band promo material in the assistant promotions director's office. My first remote gig was a Siouxsie and the Banshees show at San Diego state, hanging a huge 91x banner near the stage. After a short time I began to also intern in the production dept., where I learned to splice 1/4 inch reel-to-reel tape and do the occasional “coming soon to a theater near you” type of voiceover for on-air ads. I eventually landed a phone operator job for a whopping $3.35 an hour with perks like free pizzas from delivery guys if I could cajole the disc jockey to play a rock block of Oingo Boingo, the Cure, Depeche Mode, New Order.

Answering the phones for both an alternative rock station and an oldies station at the same time could be fun, as you'd talk to a drunk frat boy requesting Circus of Power and then an old woman wanting to hear Barry Sadler's “Ballad of the Green Berets” on the next call! Some of the best times were after hours when we'd go into the production studios often drunk and/or stoned to bash out goofy tunes with our band: The Bucketheads. The late night disc jockey, Billy Bones, even started playing our tunes! Also those sessions were where I stumbled upon sound-on-sound recording and reel-to-reel tape delay. I had many swell times during my four-year radio stint—saw tons of free concerts. My record collection also swelled during that epoch.

One of the 69xtra gold jocks would put me on the air during his shifts by playing waves crashing sound effects and saying we have a special guest today: little Emmy Collins is here reporting from Hawaii, and he’d let me say just about whatever I wanted for a minute or so. It was pretty insane as I’d do fake weather reports

Low-lights included being stone-cold broke 24-7. During a one-month stretch I ate nothing but 69 xtra gold promotional chocolate bars that I stole from the prize cage—I'd have three a day, one for breakfast, one for lunch and one for dinner. At the end of the month my entire face peeled off. The experience didn't totally ruin radio for me, but I realized that I wasn't gonna make a career out of it.