Secrets Of The Gaga Hit Single 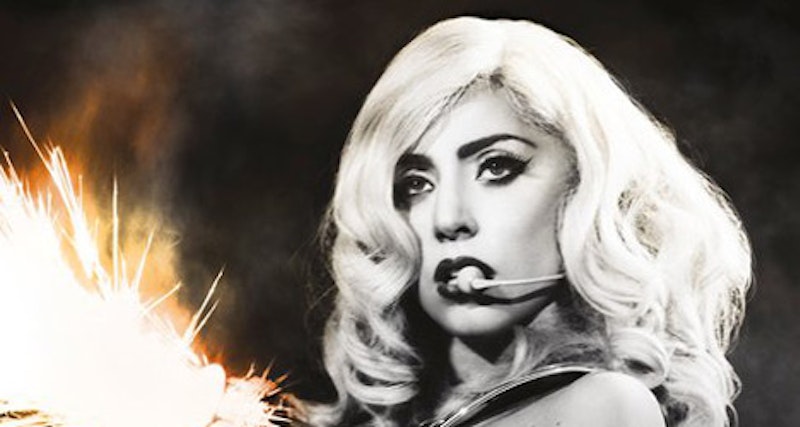 I was looking through the iTunes Top Ten songs the other day and I noticed something really peculiar. Lady Gaga didn’t have a single number in the Top Ten. By all accounts, it seemed like “Born This Way” had faded into oblivion. With her new joint “E.T. (Featuring Kanye West),” Katy Perry came out swinging, clinching the Number One spot. And now there’s that Rihanna/Britney Spears remix of “S&M” which…why are they collaborating on a song? But with the release of “Judas,” Lady Gaga is back at the top spot.   And the fight for the top in pop continues!

No matter what you think about the Gaga lady, you have to admit that this woman knows how to write a hit record. “Born This Way,” I’ll admit, was a bit too flat and a little less Gaga for my taste—but that’s because of the ridiculous hype surrounding it. The song could have been as great as “Bad Romance” or Whatever You Think The Greatest Song In The World Is, and it still would’ve fallen flat.

“Judas” breaks the curse of “Born This Way” by doing a total sonic 180. “BTW” is light, airy, and very pop, but “Judas” has a definitively darker, edgier, more industrial sound and should have been the lead single for the new record. Like the “Ra ra ra ah aahh aaahs“ of “Bad Romance,” “Judas” borrows the main idea of a syllabic earworm that eats through your brain. I have been saying “Juu daaaas, Juu daaa aah aah. Juu daaaas, Juu daaa aah aah” for four days straight.

When “Judas” starts, Gaga sings in a Jamaican patois accent (this is the one artistic choice I question): “When he comes to me, I am ready. I'll wash his feet with my hair if he needs. Forgive him when his tongue lies through his brain. Even after three times, he betrays me.” At that point, you have to imagine that the song sounds ridiculous in a club with very expensive speakers. And then out of nowhere, we’re hit with a 1980s throwback chorus that critics will undoubtedly compare to Madonna, as if she single handedly invented the riff.

My favorite part of “Judas,” though, is the Gaga Chant, where she robotically speak-raps: “In the most Biblical sense, I am beyond repentance, Fame hooker, prostitute wench, vomits her mind.” Get ready to hear a lot of Gaga Chants on the new album, because she does it on “Born This Way,” and she also does it on “Scheibe,” which previewed in January at the Thierry Mugler menswear runway show.

If you couldn’t already tell, “Judas” is about being drawn to the thing you know is bad for you. When she sings, “Jesus is my virtue. Judas is the demon I cling to I cling to,” she’s speaking about being drawn to vice, of being attracted to the good and the bad of things. And predictably, Catholics and religious fanatics are freaking out over Gaga’s reference to Judas the biblical character. But to their credit, people in the Catholic League don’t really have anything else to do but complain, so.

Bill Donohue, president of the Catholic League, had this very original and completely groundbreaking thought morsel about the Gaga: ”Lady Gaga tries to continue to shock Catholics and Christians in general: she dresses as a nun, she gets raped, she swallows the rosary. She wants to shock, but does she actually believe her own BS?”

First of all, I didn’t know Catholics were allowed to say “BS”! But more to the point, what constantly amazes me about all the overblown right-wing critiques on Gaga is that they only make her more famous. Don’t you people get it? It’s not her fans making her famous—it’s all the haters. Every time some conservative pops up on Fox News to say how bad she is, every time somebody damns the Gaga lady and compares her to Madonna, or says something horrible/awful/mean about her performance, they’re only feeding the Fame Monster, generating more album sales, YouTube hits, and downloads.

People are obsessed with what’s apparently bad for them. And in some ways, isn’t that what “Judas” is all about? By writing a song about being drawn to the bad, knowing that religious fanatics would eat it up, she essentially proves the song’s message. It’s marketing genius.

Listen, here’s the thing about Gaga. She doesn’t need a single new fan because the people who like her are going to like her no matter what. That’s a very powerful position to be in, culturally. But most crucially, even Gaga can’t avoid the sophomore album slump. Almost every artist who bursts onto the scene with a hit debut record struggles with how to reinvent or develop his or her brand. Gaga’s Born This Way won’t flop, but will it be as critically acclaimed? How many number one hits will it have?
See you on 5+23+11.