Some special issue 7" are all well and good, but don't ask me to pity the record stores. 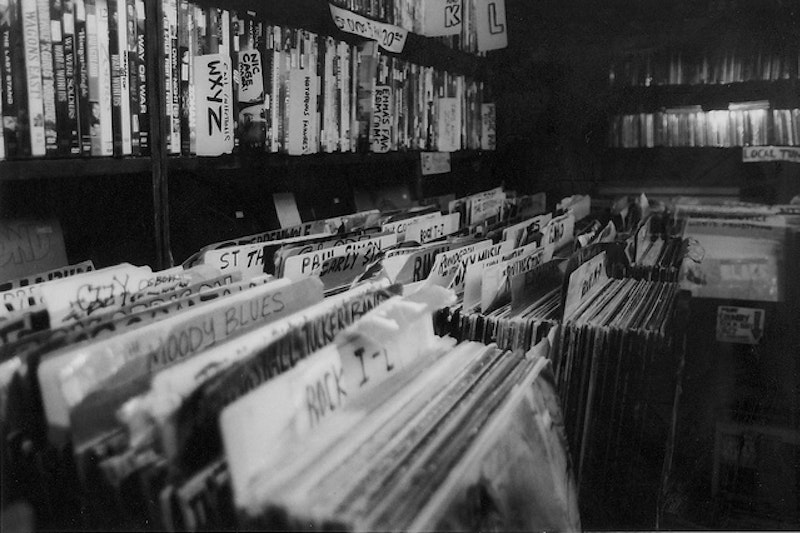 I've now sold (or thrown away) all but about 20 of my CDs—the real favorites I keep in the car for long road trips. I've talked about this before: I do most of my listening at home, so with some fairly well-attuned Pandora stations, WOXY radio, Daytrotter downloads, Hype Machine and all its years of backlogged blog posts, YouTube, Vimeo, and the free promos I receive, I can listen to almost anything I want for free. That's not to say I don't buy music anymore—I've bought three or four albums off iTunes over the past month—but the necessity just isn't there. And again, none of this is illegal. Okay, technically some of those YouTube videos are probably violating copyright but it's not like I'm torrenting hundreds of albums over here. Forget about illegal downloads, the Internet has made all kinds of music, from #1 Billboard pop hits to some 17-year-old's bedroom recordings, way more available than it ever was.

It used to be simple, right? If you liked a band, you bought their album: the vinyl, the 8-track, the tape, the CD, whatever. This sounds good, here's my money, now I can listen to this whenever I want. But it's not like that anymore: the band does a cross-country tour, dozens of videos are posted to YouTube; the band plays a couple of songs during in-studio shows for NPR or KEXP, etc; four more songs (including a previously unreleased cover) are posted to Daytrotter; then they film for One Take New York or Shoot The Player; and meanwhile Stereogum, Pitchfork and a hundred other sites post reviews that include at least one song, maybe two or three, and in all likelihood, if this is a band you really like you've heard 3/4 of the new album at least a month before it was released.

So bands have it pretty rough. Sure, it's a lot easier to put your music out there, to get heard and make some fans, but if bands want to make any money at all they've pretty much got to tour almost non-stop and license their songs to Applebee's commercials or episodes of Grey's Anatomy. So why exactly am I supposed to give a shit about struggling record stores?

Don't get me wrong, I like going to record stores, I like digging through stacks of used CDs and vinyl, and I've found plenty of quality stuff over the years at Sound Garden and a dozen other stores just like it, but let's be honest here, I can listen to Pandora for an hour and hear six or seven really great bands I'd never heard of before—bands who I might go see next time they play the Ottobar or the 9:30 Club, bands whose albums I might download off iTunes or BandCamp—and I don't have to pay $14.99 for some cheap plastic that's just gonna end up scratched or lost under my car seat. Funny how whenever I hear someone talk about the awful state of the music industry, it's always a sad sigh for the labels or the record stores, the people who were never really doing anything but making money off the artists in the first place.