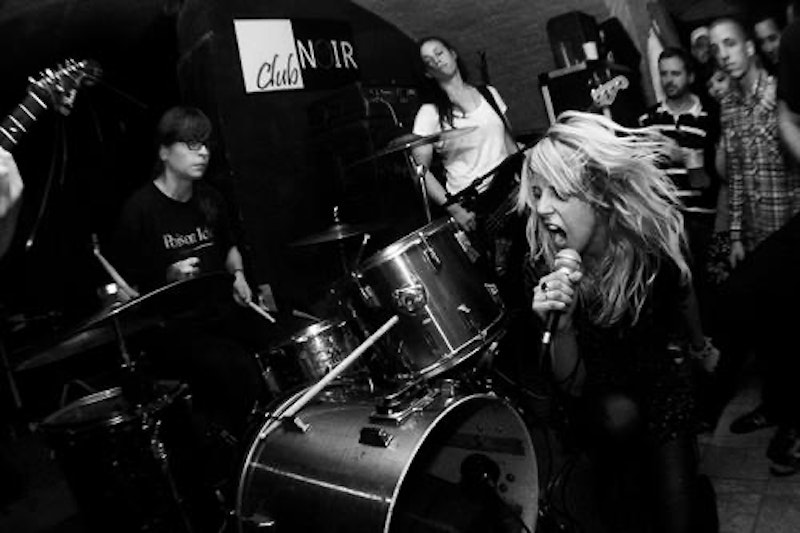 These days, it’s hard to see what rock has going for it. It’s not the hardest or toughest genre of music. It was never the smoothest. And it has very little to do with rebellion—playing guitar in an old-fashioned four-piece band is positively square now. Rock doesn’t sell the most albums, or produce the hookiest songs. It’s no longer the music of youth. But don’t tell that to White Lung, the LA via Vancouver band, or Brody Dalle, who’s been fronting groups (most notably the Distillers) since the late-1990s.

White Lung’s new album, Deep Fantasy, bolts through 10 songs in under 25 minutes, which communicates a lot right off the bat; most importantly, an understanding of the power of concision. The group’s lead singer, Mish Way, writes for several prominent publications, including Noisey and Talkhouse. She’s clear about what she likes—for example, “songs that make me feel like I’m in a cave full of noise and every echo is catered to fill the holes in my brain.” She favors drummers who play “hard, fast, simple and relentless.” Since she’s also a writer, it’s obvious that words mean a lot: “I really feel like lyrics and what the artist is saying have fallen completely off the wayside.”

This provides a pretty accurate roadmap for Deep Fantasy, which is blistering and hunched—full of repeated interlocking patterns that cycle rapidly. On its website, the band has a link to a Spotify playlist that supposedly influenced the album; it includes a wide variety of artists, ranging from the Mamas and the Papas to Abba to Venom to the Rolling Stones. But the punk-leaning-towards-hardcore rock of the early 80s, something like Husker Du, provides a better idea of what this sounds like.

Way’s voice makes everything seem like a manifesto. Her lyrics are full of sexuality and threat; sometimes they’re hard to make out amid the fervor. “I Believe You” is about sexual assault, and several other songs contain ominous statements. In “Face Down,” she sings “shut up now… don’t make a sound;” the song ends with chants of “you say it’s vile, you’re right!” On “In Your Home,” Way suggests, “lock me in, throw me down like I stole.”

White Lung’s music is potent and they’ve got an eloquent, outspoken front woman, so they’ve received lots of (deserved) attention. Brody Dalle, on the other hand, hasn’t received nearly as much coverage, though she has also released a fiery album of her own, Diploid Love. It’s less explosive than Deep Fantasy, but more open-eared about all the different things that rock can be.

In an anecdote in a recent New Yorker profile of the group the xx, John Colapinto noted that the singer Madley Croft initially wanted to sing like Brody Dalle back when she was in the Distillers. This is hilarious, since the two couldn’t sound more different. Dalle’s voice is close to inimitable anyway: full, low, dark, droney, it’s a thing made for grunge and punk, for delivering lines likes “got my own private road to hell/got a tree, it grows money” with gravity and charisma.

Dalle’s previous work in the Distillers and Spinnerette proved she could revive punk and handle post-grunge; Diploid Love has a mission with a wider scope. This becomes clear during the album’s first track, “Rat Race,” which sounds like it’s beamed in from 1995, until Dalle heads into the hook—“I’m gonna burn this city down”—and a peppy horn section toots its way into view. As a rocker in the90s, you wouldn’t be caught dead with a horn section. Brass signaled pomp and circumstance, glitz and glamor; everything that grunge and punk claimed to be against. Here, the horns sound like they were lifted from the soundtrack to an old Western movie.

Dalle keeps breaking open her buzz-saw guitar rock in different ways. “Carry On” fuses with dance—there’s a brittle, programmed beat, synthesizers, and clean bass high in the mix. The wailed hook allows Dalle to show off her ability to stretch syllables: she sings, “all I really know is that I’ll carry on,” making that “on” last for six beats. For “I Don’t Need Your Love,” the sturdy percussion changes, playing with a slowed-down break-beat and military drum rolls. The vocal here is high and light; Dalle uses not one, but two sets of strings. “Meet the Foetus/Oh the Joy” moves into a double-time portion with hardly any words—chants and hums make up the album’s most evocative chorus. Rock may now be square, but it can still be revitalizing.