On their debut album, Haxel Princess. 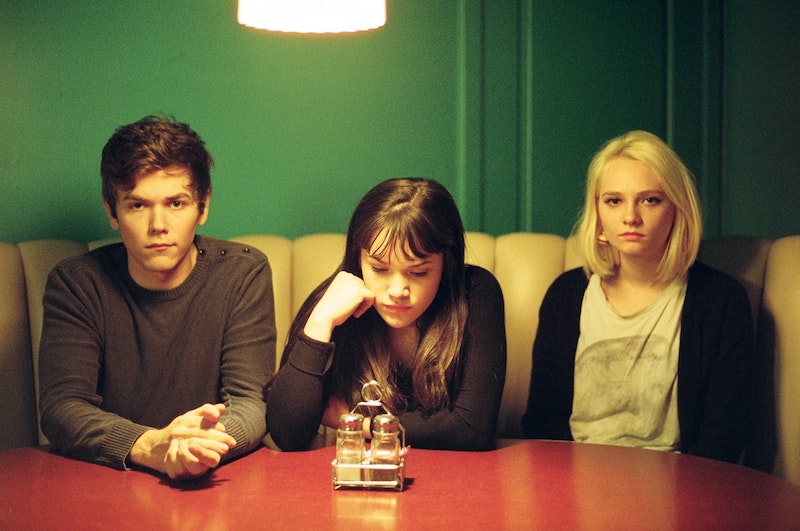 The debut album from Cherry Glazerr, Haxel Princess, can be linked to a number of trends. It contains a series of short songs that display a sense of 1960s pop and punk, as well as an appreciation of the contrast between sweet vocals and fuzzy guitars—interests that could connect Glazerr with a slew of post-Vivian Girls bands, or the Raveonettes, or Best Coast. But when placed next to the work of these groups, Haxel Princess feels less rigid. This band make threats, but in non-threatening ways. And they have none of punk’s sternness, choosing to dedicate a song to their favorite food: “got the bread, got the cheese/make me a grilled cheese please.”

Cherry Glazerr contains three musicians: Clementine Creevy, Hannah Uribe, and Sean Redman. Clem began to write songs when she was around seven years old. She strapped on a guitar and stepped into the studio for the first time five years ago, at age 12. More recently, she connected with Hannah (drums) at high school, and with Sean (bass; the oldest member of the band at 23) “at a summer program at the Musicians Institute in Hollywood.”

“Cry Baby,” the opening track on Haxel Princess, is an audacious but graceful way to start the album—a song that approximates a wolf whistle. There are high wordless passages, like melodic sighs, but also the no-nonsense line “don’t tease me, I’ll shove you on the ground.” The band likes conversational narratives and sudden twists. On “Bloody Band-aid,” Clem sings, “I have a crush on you/and I have this weird bloody band-aid.” Later: “I liked him, but not as much as I liked you.” And the kicker: “You didn’t like me/as much as I liked you/so fuck you, fuck you.”

One of the things that separates Glazerr from their peers is the way that old soul melodies seem to sneak unobtrusively into their songs. (Curtis Harding, a label mate on Burger Records, also plays with the edge between rock and soul, though his efforts are more self-aware.) Too much guitar rock is obsessed with regurgitating whatever part of the genre’s past seems most glorious at the time of recording. But the creeping bass on “Grilled Cheese” sounds more like Motown, slowed down to a snail’s pace. The guitar on “Glenn the Dawg” rises and falls slowly as it might in a Stax ballad. “White’s Not My Color” starts with a mean intro, almost a sludgy blues. Then it re-arranges itself into straightforward basher, one of several songs that plays with tempo and texture.

Out on their first tour, Clem says, “It’s totally exhilarating to realize that it’s what you want to do for the rest of your life.” This band may not last—after all, two of the three members may be separated when they got to college. But then again, a lot of music these days is made by emailing files back and forth. And you can make grilled cheese anywhere.

SPLICE TODAY: When did you start making music? How long have you been writing songs?

ST: How did you guys meet?

CC: Hannah and I met at school and Sean and I met at a summer program at the Musicians Institute in Hollywood.

ST: Was Haxel Princess your first experience recording? How did you like it? Were there any big adjustments that you had to make in the studio? How long did it take to record the album?

CC: No. I started recording demos in the same studio that we recorded Haxel Princess in when I was about 14 with Joel Jerome and Lucy Miyaki. I recorded most of the songs on Papa Cremp (our first eight-song tape) there with Joel, then Hannah joined and we finished the tape together. After we formed the band we went back and recorded Haxel Princess. It took about four months to record the new songs and the rest of the songs were sort of recycled from Papa Cremp.

ST: You guys have a real knack for song names. Where did you get the idea for the song “Trick or Treat Dancefloor?”

CC: My aunt Bree has Down’s Syndrome and one day she blurted that out. I think she was referring to Halloween and I was like, “Dude, that’s gold.”

ST: How did you meet the guys at Burger records? Do you listen to a lot of the other bands on the label?

CC: The Burger Records guys found us on Soundcloud and messaged us. Burger has a great roster, so yeah we do listen to a few other bands on the label like The Garden, Dead Ghosts and Natural Child.

ST: I read that your music’s been used by Yves Saint Laurent? How did that come about?

CC: Hedi Slimane, the creative director, discovered us when we played Burgerama two years ago and he was stoked on our music. He’s a taste-maker so we felt fortunate to be a part of Saint Laurent.

ST: You guys are on tour right now. Is this your first tour? Do you enjoy touring?

CC: Yeah, it’s our first tour and we love it! It’s so important to travel and we feel lucky to have fans all over the US and beyond. It’s totally exhilarating to realize that it’s what you want to do for the rest of your life.