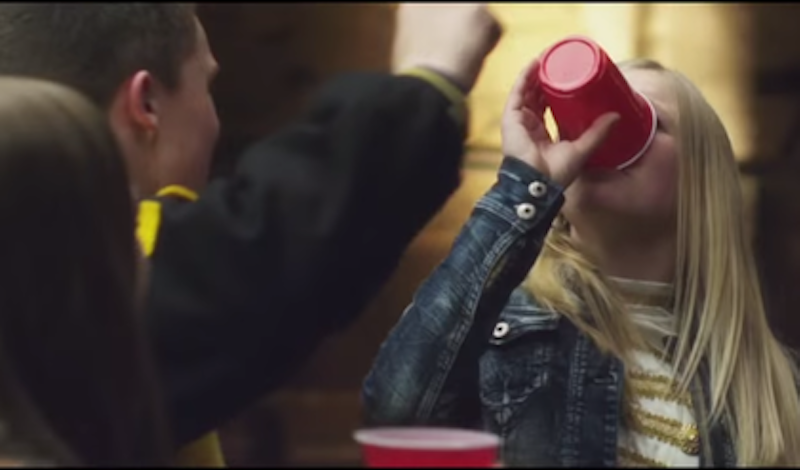 Of all pop music, country is the most focused on tradition and the past. As a result, the way the music has changed over time can feel especially jarring. Kira Isabella's new single "Quarterback," for example addresses the controversial issue of date rape. That's an unusual and even shocking topic for country, which has always been three or four steps behind the rest of pop culture in its handling of sex. But beyond that, Isabella's video is in many ways at odds with country's approach to women's issues—an approach epitomized by one of the most iconic female country performances, Kitty Wells' 1952 song "It Wasn't God Who Made Honky Tonk Angels."

Wells' record was a response to Hank Thompson's smash, "The Wild Side of Life." Thompson's song chastises the male narrator's fiancé, who dumps domesticity for the sinful life of the honky tonks, complete with wine, song, and some unspecified level of sexual activity. ("The glamor of the gay night life has lured you/To the places where the wine and liquor flows/Where you wait to be anybody's baby/And forget the truest love you'll ever know.")

Thompson's song is about a woman failing in her traditional role—she's seduced by modernity and sexual freedom into abandoning old family values. You might imagine that Wells' response would reject those family values too, but it doesn't. Wells' keening, wavering mountain vocals are noticeably more backwoods than Thompson's smoother, fruity mainstream-ready swing. In that spirit, her message is not, "dancing at the honky tonk is a lot more fun than being your boring wife," but rather an indictment of men for cheating and forcing their women into a life of sin. "It wasn't God who made Honky Tonk angels/As you said in the words of your song/Too many times married men think they're still single/That has caused many a good girl to go wrong."

Wells' song encapsulates a lot of what we think of as classic country. It champions traditional values, both musically (in Wells' stolidly retro vocals) and thematically, in its championing of marriage as an ideal. The song is set, too, in a traditional country venue—the honky-tonk bar, catering to a rural working-class, or at least to a working-class that was recently rural before it was attracted to/debased by that nightlife. The song is for adults facing, and struggling with, modernization, trying to explain and understand new values without abandoning the old ones.

Kira Isabella's "Quarterback" couldn't be more different in its presentation or its imagined audience. Isabella's vocals are exponentially more polished than Wells', or Thompson's—the lingering hint of a burred country quaver only emphasizes how far she is removed from Wells' plunky, abrasive keening. The backing is orchestral and sweeping rather than low-fi—the honky tonk, once an icon of dangerous modernity, has been long ago left in the rear-view mirror by teams of be-suited producers who may or may not affect cowboy hats.

The content of "Quarterback" is similarly distant from Wells' tiny roadhouse. The rural/urban tension is gone, replaced by a comfortably suburban world. The age of the protagonists is significantly different as well. Wells' song is about an adult woman; Isabella's is about a high school freshman. In line with the rise of Taylor Swift, country music, once the soundtrack for working class adults, has become an anthem for suburban teens.

It’d be easy to take the conservative country music stance and praise the past at the expense of the present. And I'd much rather listen to Kitty Wells' small, fiercely broken song than Isabella's bombastic saccharine arrangements. I also appreciate the way that Wells is willing to end out on misery, with nothing resolved and everyone unhappy. The country weeper is a tradition that’s fallen into some disfavor in the contemporary scene. This is so much the case that even Isabella's video about rape and abuse is obliged to tack on an unlikely upbeat ending, where the guy's iniquity is revealed and justice prevails (an alternate ending is somewhat more somber, but doesn't alter the overall narrative.)

Still, even though I prefer Wells to Isabella, I have to admit that the contemporary track has some advantages over its predecessor. In 1950s country, domestic violence was only visible in country through the distanced folk horror of the murder ballad; it couldn't be addressed in a less ritualized way. As a result, the only motive Wells can offer for the honky tonk angels' flight is a vague charge of male infidelity. In contrast (and abetted by the up-to-date technology of video), "Quarterback" provides a specific, careful depiction of how and why power disparities work against women. "He was the quarterback/Smile at her, imagine that/Who you gonna blame the star of the game/Or the no name girl in the freshman class?" is a lot more pointed than Wells' bitter but circumspect, "From the start most ev'ry heart that's ever broken/Was because there always was a man to blame." Wells talks about a woman whose life was ruined by a man, but the path to that ruin isn't really described. Isabella takes you step by step, from the girl's hero worship, through the use of alcohol ("Never had a drink before/But he held it to her lips and she took her first sip/And before she knew it, she had three more,") and on to the social hierarchy that ensures no one will believe her.

If Isabella is able to go further than Wells, though, it's in part because Wells was there first. "It Wasn't God Who Made Honky Tonk Angels" wasn't the first country song to view the sex wars from a female perspective, but its hugely popular sympathetic portrayal of a fallen woman was an important milestone in country history. From Dolly Parton's "To Daddy" to Loretta Lynn's "Don't Come Home a Drinkin' With Lovin' On Your Mind," all the way to the Pistol Annie's "Being Pretty Ain't Pretty," Kitty Wells provided a blueprint for women in country to talk about power, gender and the intersection of the two. Whatever its distance from 1950s country, "Quarterback," in that sense, is in the tradition.