Bent Bolt and the Nuts' “The Mechanical Man," a weird anti-song on a 7" single in 1966, transcended joke status like so many other contemporary novelty records. 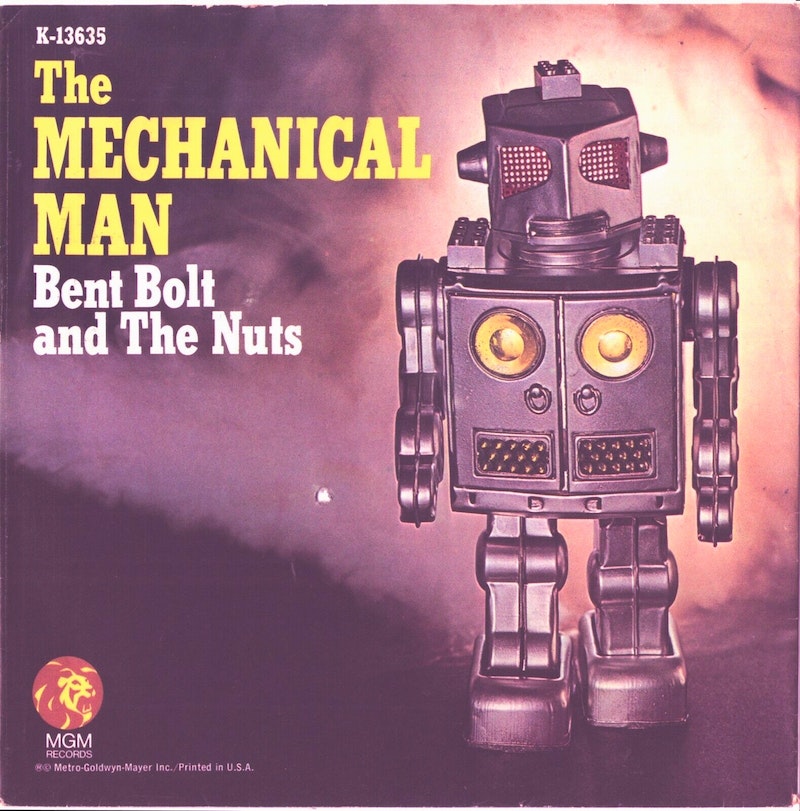 One of the more mysterious/sci-fi inspired experimental works of the 20th century was “The Mechanical Man” a 1966 7” vinyl release by Bent Bolt and The Nuts. Like many other vintage novelty records, the march of progress has caused this weird anti-song to transcend joke status. In the 1960s it would’ve been akin to a light Jetsons-style fantasy. Today the record is seen as a precursor to heavy dystopian cult films like Her, Android, and Blade Runner.

Many believe the alter ego behind Bent Bolt and The Nuts is pop/rock legend Teddy Randazzo, an artist who cut scores of rockabilly, doo-wop, and lounge music singles throughout the 1950s and 60s. He’s known best for co-writing Little Anthony & The Imperials’ 1964 smash “Goin’ Out Of My Head.” Randazzo served as producer of “The Mechanical Man,” but there’s no direct reference to his participation as an artist. Further adding to the mystery, the “Mechanical Man” songwriting credits list a group of authors: “C. Astone-C. Mastren-L. Burgio-M. Gartman.” One name, M. Gartman, most likely refers to frequent Randazzo collaborator Mark Gartman. The “L. Burgio” mentioned might be Lou Burgio, who later collaborated with Gartman on a 1970 single cut by pop soul group Mardi Gras. At the time of Bent Bolt’s release Randazzo, Gartman, and Burgio shared one other big thing in common: New York City. All three artists were based there during the 1960s.

“The Mechanical Man” drunkenly treads the line between music and noise. It’s a jagged series of muted guitar chords that chug along barely changing in tone. A tuneless slide whistle pops in and out of the arrangement while a clanging cowbell evokes cogs, circuits, and pistons on the fritz. The drumbeat is a fractured march augmented by the metallic industrial noise of chains that are randomly flailed throughout the song’s brief duration.

Lyrics come from the perspective of a “lonesome” A.I. device searching for electronic companionship. Randazzo (or whoever it was) employs a twisted vocal style that eschews crooning in favor of awkward performance art. It sounds like someone trying to imitate a vocoder effect without using any kind of sound processor. This approach is known by musicologists as overtone singing. The practice is an ancient tradition often used in folk music from Tibet and similar remote parts of northern Asia. Its presence in western pop is rare.

Without a shred of passion, The Mechanical Man’s buzzing intonation essays the finer points of his dating profile in a random mix of Popular Mechanics jargon and convenience-obsessed Madison Ave. ad copy. It’s the kind of word salad that was more commonly used to hock household electronics to the homemakers and circuit bending hobbyists of early post-War suburbia: “I was made out of stainless steel/To pro-tect my frame from rust/There’s a vacuum cleaner built into my chest that aut-o-matic-lee picks up dust/I am 5 foot 8 inch tall/And as strong a moo-ving vaan…/I can fix an aut-o-mo-beel/I cant put up a Christmas tree/I can milk a cow/I can mow a lawn/I can pour you a cup of tea.”

After all this robo-bragging he lays his ironclad heart bare, begging for a mechanized significant other to share the utilitarian chores of his existence: “I am looking for someone/Who can help me charge my coil and fill me up with batteries and feed me daily oil/I would not care at all if she looked like a garbage can/Does anyone here know a robot girl who wants to meet a mechanical man?”

The 1960s witnessed the birth of the virtual social center that McLuhan called the “global village,” the overpopulation of major metropolitan areas throughout the world, and the rise of the electronic dating industry (one of the first computers ever to function as a matchmaker was built and designed in Manhattan's Lower East side in 1964, only blocks away from the recording studio where Randazzo and co. produced “The Mechanical Man”). Within this milieu an increasingly industrialized society was transforming love, lust, and sex into recreational pursuits. The post-WWII economic boom (the same boom that brought monumental developments in late-century technology and science) created a host of new social activities tailor-made for computerized infrastructures and all the disposable profits attached to them. This freed society from the oppressive morality that made dating merely a preparation for marriage and helped set the stage for The Sexual Revolution’s positive impact. It also created a host of new circumstances that could surgically remove the emotional context from sexuality.

“The monotone vocal delivery of “The Mechanical Man,” the dissonant repetitive clang of the record’s instrumentation, and its jarring lack of sentimentality all represent a synthetic emotional link made from programming, not passion or any other human desire. This illustrates a negative criticism of the subliminal effect that the post-industrial world was having on social mores and behaviors. The humor springs from the absurdity of hormone-less sexuality, coldly calculated warmth, passive desperation, and other impersonal hybrids. The record’s paradoxical ending puts a finer point on the whole pile of circuits.