More one-offs, oddities, and brilliant singles released by Dome Records in the 1960s. 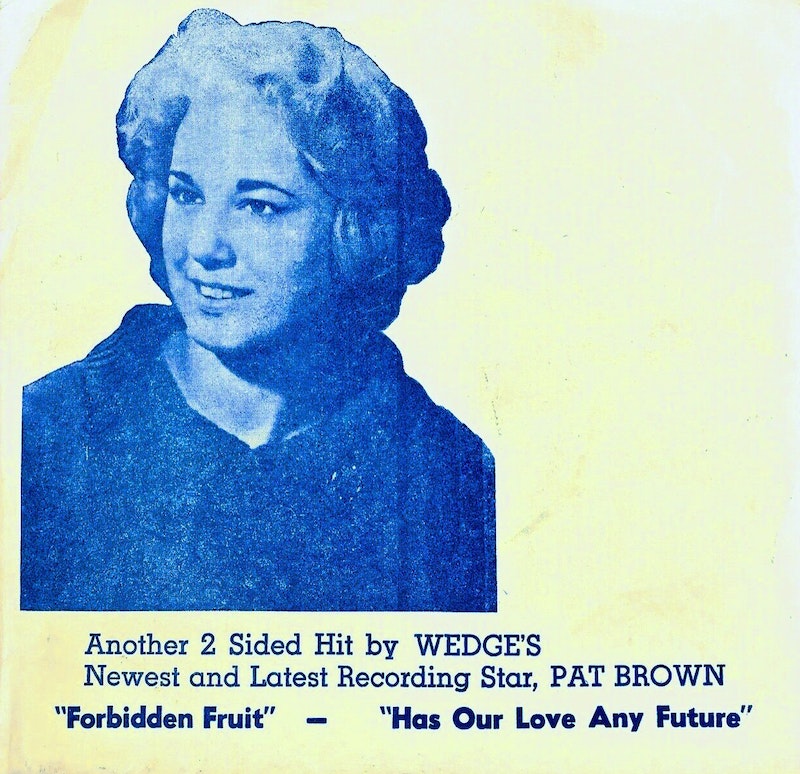 "Forbidden Fruit" b/w “Has Our Love Any Future?” by Pat Brown (1960): This spirited rural rocker was only 19 years old when she cut the first track released on Dome Records‘ sister label Wedge. “Forbidden Fruit” is a protest against sleazy lotharios and cheap thrills, but never comes off as puritanical. Brown (known today as Pat Brown Bailey) recently shared some comments on the chaotic circumstances surrounding this curious moment in rock’n’roll history. You can read those over at 45 Cat.

"I Want You All The Time" b/w “Trip Around The USA” by The Limits (1966): The Limits gained some notoriety as a regular act at the Fort Meade Officer’s Club. After adding two members they evolved into The 24-Karat Five who recorded “Get You,” the rousing leadoff cut from Baltimore’s Teen Beat A Go Go. Initially these Anne Arundel County kids were a trio who called themselves The Limits. Sans The Five’s folky jangle, The Limits cranked out a raw sound that won them a record deal with Dome shortly before the name/lineup change took effect. “Trip Around The USA” is good but not great, while “I Want You All The Time” is a reverberating plunge into the borderland of early-death rock and Southern soul. It’s one of many sonic mutations that made mid-Atlantic teen rock distinct from its Vietnam era counterparts in other regions.

“Dawn” b/w "Tawk" by Summer’s Misfits (1966 or 1968): 1970s pop hero Jerry Scoggins began his recording career with this Carney, MD band who also included members of soul rockers The Fugitives. Along with Alana Shor and Don Wimbrough, Scoggins was one of several Baltimore artists who became famous as a member of local super group The Paper Cup. The lone Dome release from Summer’s Misfits is a fine two-sider. Its Spector-influenced top deck is resplendent with quirky arrangements, bittersweet nasal crooning, loud/upfront castanets, and an avalanche of spaced-out reverb that gives the track a proto-shoegazer sound; you can hear it on the double-CD Psychedelic States: Maryland In The 60’s. The flip is a honking instrumental rocker that holds its own with stark treble, greasy sax, and funky drums. It sounds like what might happen if The Fireballs killed a keg then tried to record a Bar-Kays tribute with some cheap practice amps in a parking garage.

Details on the original issue of this 45 are a mystery. If it did come out in 1968 that would make these guys a defiant throwback, a pomade-drenched rebellion against the late-60s tide of psychedelic mania. On the other hand, the one Summer’s Misfit I talked to may have just lost the disc’s exact release date in a haze of 50-year old memories. Jerry Scoggins has said that this 7” came out in ‘68, while the liner notes for Psych. States: Md. note it as a March ’66 pressing. Rumor has it that some Dome Records were retroactively released. In that case, the possibility that Johnson and co. held off on distributing and promoting a record for two years would be a solid example of the label’s oddball standards.

“Little One” b/w "You're Gone" by Freddie & The Freeloaders (1966?): Here we have Dome Records’ biggest mystery. Freddie & The Freeloaders were a band from Texas who inexplicably ended up cutting a single at the Baltimore label’s studio. “You’re Gone” is just under two minutes of twisted Del Shannon worship doused in primal sonic murk. This noisy blast recalls the works of Sue Patrick & The Nomads, Hasil Adkins, The Bittner’s label discs from The Buggs and Donnie, and other savage rockers from the rural mid-Atlantic US. Side A is a sleeper classic; “Little One” has the doomy ballad sound that characterized Dome weepers from The Vendors, Septors, Summer’s Misfits, and Road Runners. It also shares side B’s distorto production. Ralph Johnson’s overdriven soundboard transports “Little One” into a mysterious zone where the line between love and obsession is impossible to find.

"Six Feet Under" b/w "I Don't Want It (It Is Love)" by Bob Fryfogle (1964): The cosmic shuffler “Six Feet Under” spotlights high-end production values and a tight performance, sounds that imply Johnson and arranger Joey Welz may have outsourced talent for this release instead of relying on their usual teen wombats. Singer Bob Fryfogle (aka Bob Fry) had the look, vocal style, and discography of Nashville pro. Maryland folkies Clint Lewis & James Hutchins co-wrote the track. The hillbilly rock B-side is an unapologetic anti-love song, while the A-side presents Dome/Wedge’s distinct eccentricity. “Six Feet Under” is a suicidal hallucination floating in a twangy nebula of distorted guitars and throbbing tremolo.