Alice Cooper, at 74, a born-again Christian and sober, is still touring around the world. 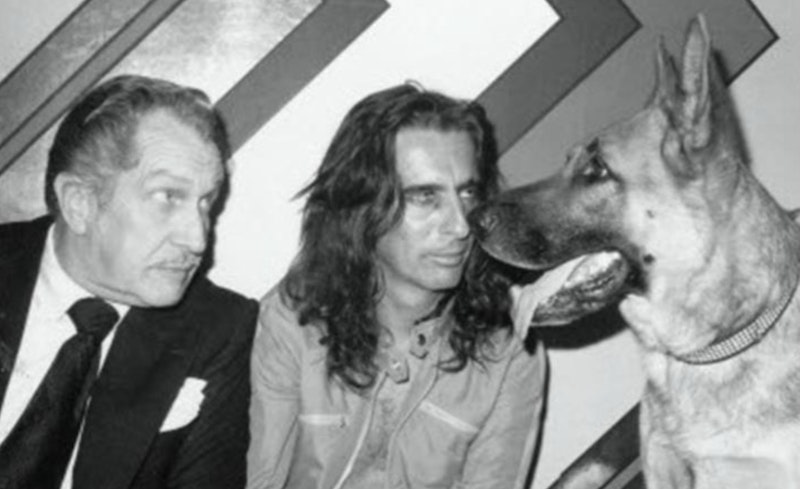 There aren't many relevant rock icons still around. The Rolling Stones are a go-to example of rock survivors. The longevity of Alice Cooper is another hard-rocking story of success driven by excess. In 1964, the 16-year-old Vincent Damon Furnier and his high school track teammates won first place in the annual talent show. Donning wigs and matching costumes, they mimicked the Beatles; calling their band the Earwigs, they performed a few Beatles songs in parodies about being on the track team.

Spurred by that positive attention, they purchased instruments from the local pawn shop, learned how to play, and wrote some songs, becoming local sensations, The Spiders. Many teenage boys did the same thing too. Starting bands all over Anytown, USA. But most of them didn't have a gimmick. Even at the earliest stage of a career spanning over a half-century, the young pre-Alice saw the theatrical aspects of rock ‘n’ roll. The Spiders always displayed a giant spiderweb backdrop at their shows. It set them apart from other local groups. The Spiders changed their name while making regular road trips during the mid-1960s playing gigs in L.A. The short-lived Nazz band name was dropped after discovering Todd Rundgren was already using it.

Enter Alice Cooper. A safe title for a group whose stage presence was evolving into an outlandish vaudevillian sideshow spectacle with prop skeletons and stage blood. Did he get the name Alice Cooper from a character on Mayberry RFD? The Alice Cooper who replaced Aunt Bea? Probably. Did he tell Dinah Shore that fact in an interview on her television show? Possibly. What's in a name anyway? In this case, more than he bargained for.

Music mogul Shep Gordon saw the raw potential in Alice Cooper, even after seeing the boys on an unsuccessful first-night premier gig, they cleared the house after two songs into their set at the Cheetah Club in Venice Beach. It was Lenny Bruce's birthday party. The Doors were also on the bill that night. An audition was arranged with Frank Zappa, whose new record label, Straight, searched for bizarre bands to sign. They were told to arrive at seven. Instead, they showed up at seven a.m. Zappa liked their willingness. Among such notable acts were Tim Buckley, Captain Beefheart, and the GTOs' all-girl band (Girls Together Outrageously), who were credited with dressing up the new Alice Cooper group in "glam rock" makeup fashion. Straight records later segued into the Bizarre record label. Zappa used it to promote his band, the Mothers of Invention, signing acts like Wild Man Fischer, LennyBruce, and the virtually unknown folk artist Sandy Hurvitz, known as Uncle Meat.

Pioneering shocker Screamin’ Jay Hawkins could claim a true origin in the macabre music theatrics. He practically invented the category. His career took off in 1956 with “I Put A Spell On You,” released on the Okeh record label. His act consisted of him entering the stage inside a coffin, suddenly jumping out to perform, wearing a floor-length Dracula cape, screaming, waving a long voodoo staff, and holding a flaming skull by the name of Henry. Whether or not this inspired Alice Cooper and similar acts like The Crazy World Of Arthur Brown, who wore a burning metal horned crown, is better left to debating rock historians.

It's all good schtick any way you slice it. Heavy Metal, Goth, Punk, and Psychobilly offshoots, connect a sub-genre Alice Cooper helped make famous, even as a cult following. There was no shortage of cornball antics. During a Black Sabbath concert, Ozzy Osbourne bit the head off a bat. Alice was also rumored to bite the head off of a chicken. That didn't happen, but it wasn't rare in those days. He did enjoy pulling the heads from baby dolls. Raw meat, plastic insects, rubber chickens, doll parts, feathers, balloons, confetti, and other weird objects were thrown at the stage by fans and bands eager for bad publicity.

All kidding aside, it's done in the name of artistic freedom and wholesome fun. The dirty deeds, one-upmanship, and outshining your peers are par for the course in rock ‘n’ roll etiquette. Every conceivable debauchery and sexually deviant act has gone down through the gauntlet. Decadence is the clear choice for any good rock ‘n’ roll band worth their weight in ticket sales. I saw Alice Cooper live in the early-1970s when his performance was deemed risqué. Compared with today's standard fare, it was tame. So what are the new big things, live snuff concerts, pop star executions?

Alice guest-starred on The Muppet Show. His evil guise served as the show's cartoony theme, which cast him as an agent of the Devil. And speaking of Satan, maybe Mr. Cooper sold his soul for fortune and fame at the crossroads of Hollywood and Vine.He's made personal and longtime professional friendships with the surrealist artist Salvador Dali and the master of movie horror Vincent Price. Devil worship, rock ‘n’ roll, and surreal horror go together. As if that wasn't enough, he's now on a world tour and planning concerts with his second band, the Hollywood Vampires, whose members include Johnny Depp and guitarist Joe Perry from Arrowsmith. Welcome to Alice Cooper's 74-year-old nightmare. Playing golf with a disgraced ex-president, having Dick Van Dyke as his A.A. sponsor and becoming a born-again Christian. Alice Cooper is forever 18, and he knows what he wants. He says: "We were into fun, sex, death, and money when everybody was into peace and love. We wanted to see what was next. It turned out we were next, and we drove a stake through the heart of the Love Generation."