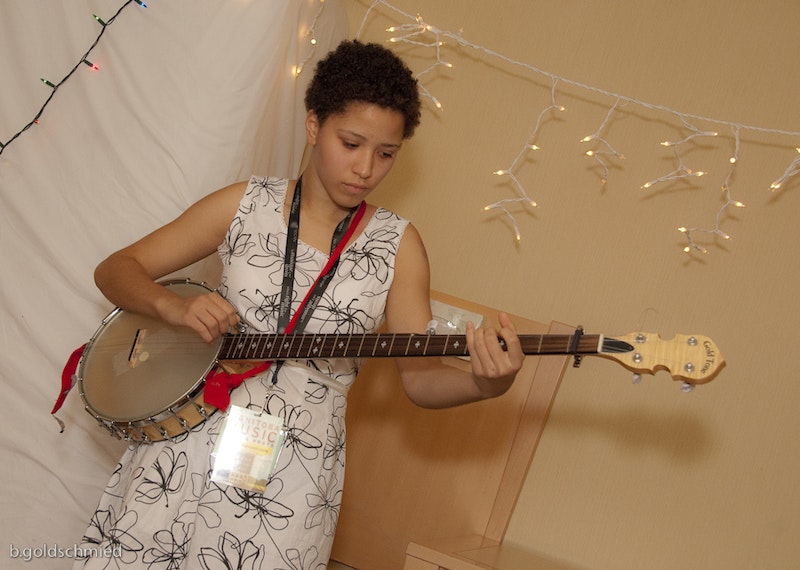 For most people, "banjo" means Deliverance. The instrument is seen as the atavistic instrument of drooling, hopelessly unhip backwoods hill dwellers. Quaint, white, rural, and out of date, the banjo is, at best, traditional. At worst it's menacingly retrograde—the soundtrack for sitting on the back porch in your overalls and quietly decaying.

Like most stereotypes, this one doesn't hold up to scrutiny, as a couple of new albums make clear. Kaia Kater doesn't even really need to play a note to undermine the usual banjo image; she's a Canadian of Afro-Caribbean heritage, and her picture on the cover of Nine Pin, banjo slung over her back, is a reminder that the instrument isn't white people's at all. It came over with black people from West Africa. Rather than stuck in one corner of Appalachia, the banjo's covered a lot of ground.

And so, appropriately, in a quiet way, is Kater's album. A few tracks are as old timey as any bluegrass fan could wish—though even there, when a Canadian leans into "Fine Times At Our House" or "Hangman's Reel" you're reminded that those songs come out of Cape Breton or Scotland as much as Appalachia.

Other tunes, though, put the banjo through a less expected range of folk idioms. "Saint Elizabeth" is a tough, church-tinged blues. "I'm the devil's disciple, Elizabeth/down, down in the depths of below," Kater declares, the banjo scrape an ominous counterpoint to the electric guitar and distant, pained trumpet. Eclectic and badass, it's more rock than country—the sort of song the Rolling Stones or the Animals would’ve been happy to perform over 50 years ago.

"To Come" goes even more against type, and makes the banjo futuristic. Electronic distortion; turning the instruments clear plunk-plunk into distorted electronic bleep-bloop, robots square dancing out beyond the sun.

And the title track, "Nine Pin" turns the banjo tune into ravishing singer-songwriter radio pop, with a dulcimer providing washes of sound like a keyboard, and Kater leaning into downbeat Lana-del-Rey-worthy self-dramatizing lyrics. "These clothes you gave me don't fit right/the belt is loose and the noose is tight/I'm drunk out looking for a fight/I'm soft and heavy as the night." It's sexy, sad and wise, not characteristics one usually associates with banjos.

Nathan Bowles' Whole and Cloven heads off in a different direction, drawing not on blues or even electronica, but on contemporary classical and drone music. "Chiaroscuro" recalls the mesmerizing, layered repetition of Steve Reich, as the banjo's crystalline percussive tone is turned into a dreamily assaultive pulse. "I Miss My Dog" settles into a groove and stays there for 11 minutes. It sounds more like a raga than a traditional banjo tune, with minor variations in strum and rhythm taking on almost spiritual intensity, like listening to the subtle variations in the chanting of Tibetan monks.

Bowles, like Kater, also touches on more expected banjo fare. "Moonshine in the Sunshine" is an easy strum reminiscent of Charlie Poole type string bands, down to the goofy lyrics—though Bowles' is a bit goofier even than that. "Wouldn't it be funny if all the fish dropped out of school/we all decided we each had to have our own little private pool/and wouldn't it be awful if they drank up all the water/and we all died of thirst in a giant fish man slaughter." That giant fish-man slaughter sums up Bowles' attitude towards his instrument, and Kater's too. They're both happy to have the banjo be a little corny, but they also want room for it to be weird, and misshapen, swimming in from an unexpected angle. Banjos may be square, but as Bowles sings, "the straightest line is crooked/thank god it ain't no straighter."