My personal favorite Pumpkins show ever. 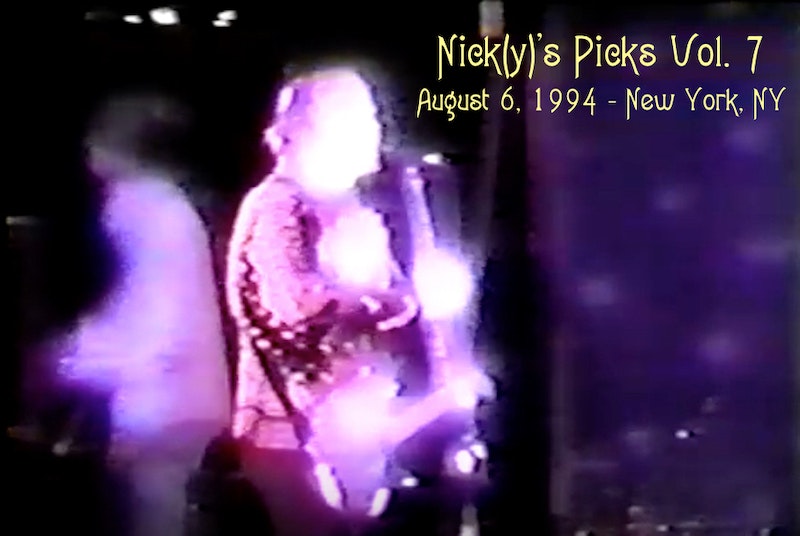 This is my favorite Smashing Pumpkins performance ever. After six and a half years of voraciously consuming every bootleg, B-side, interview, and videos I could find, I keep coming back to this show. Twenty-two years ago today, The Smashing Pumpkins headlined Downing Stadium in New York as part of Lollapalooza 1994. There were two nights at Downing Stadium, and this is the second. The first night was a complete disaster. Listen for yourself: after giving Courtney Love time out of their set so she could play “Doll Parts” by herself, the Pumpkins took the stage and quickly careened way off course. Courtney’s performance is remarkable, but the Pumpkins just completely fall apart for whatever reason. Five songs in, they launch into “I Am One,” which had been expanded and bloated with a drum and bass vamp section in the middle so that Billy could rant and rave about the same things every night. You’d think he’d switch it up a little over the course of a year, but nope — at this point in 1994, diehard fans expected the “gimme gimme gimme gimme gimme gimme gimme gimme NOTHING” rant as much as the opening lick of “Today.” It’s high risk, high reward when all you’ve got going on stage is a rhythm vamp and Billy screaming at the audience for five minutes or more. On the first night, they lose all momentum during the rant section of “I Am One.” Billy picks fights with audience members (“I don’t take shit from nobody. Especially not a guy in a tank top and a mustache. I mean I’m not the best dresser, but you know…Tanktops are out, dude.”) and goes way too far with the angry nihilist bit. The most powerful moment of the set is when Billy just loses it on some guy that told him to fuck off: “Yeah? FUCK YOU TOO, YOU FUCK. FUCK YOU, FUCK YOU, FUCK YOU!!! You can give me the finger, you can call me an asshole, I DON’T FUCKING CARE!!!!!”

People that were there can attest to how badly the band alienated the crowd that night. I know someone who was there on the first night that hasn’t listened to the Pumpkins since because of their behavior that night. After “I Am One,” the soldier on, before abandoning “Siva” halfway through and cutting the set early with a defeated cover of Thin Lizzy’s “Dancing in the Moonlight.” Exactly halfway through the forty-five date Lollapalooza tour, the band imploded on stage in front of a major market. Despite all their differences, the original lineup excelled when their backs were up against a wall and they had to prove themselves. This self-imposed pressure could backfire and occasionally resulted in disastrous shows, like their performance at the Reading Festival in 1992: Siamese Dream was still a year away, and the Pumpkins’ were still deep in the shadow of Nirvana. Playing a daytime set at the same festival that Nirvana famously headlined, Billy felt they played so badly that he should break up the band. Rough festival sound aside, that doesn’t show on the recordings I’ve heard — but it’s impossible to ignore on the August 5, 1994 bootlegs. They fucked up.

So this is the scene on August 6: after an abysmal first night, the band come out eager to prove themselves and annihilate the audience. One of the most striking things about this show is that they open with “I Am One” — common during the Gish tours, but as far as I know, this is the only time they did it during the Siamese Dream tour. Instead of coming back with their tails between their legs, they open with their most challenging and atonal song, radically transformed from its original arrangement into a thrash metal spectacle. The main riff (F# to A) is played palm-muted and mimics the rat-tat-tat of rifle fire and goose-steps — this is also most likely the origin of the main riff in “Fuck You (An Ode to No One).” The difference between the two nights is obvious immediately: this is an anger focused, a controlled intensity that came with all of the band’s best performances. Despite coming on — at least psychologically — as the defeated and embarrassed underdog, opening the show with “I Am One” is a gesture that gives the audience no quarter, and demands that the band be accepted on its own confrontational terms. It’s a glorious and triumphant moment, and more than anything, that’s what makes this my favorite Pumpkins bootleg: the spirit and the heart of the band is at stake and ultimately validated by a much more receptive audience. “We are The Smashing Pumpkins,” Billy declares three songs in, “We always have been and always will be The Smashing Pumpkins. Some people like that, and other people don’t. But that’s okay, too.”

Staples of the Siamese Dream tour make up most of the setlist, but the whole performance is just blistering, a supernova even outside the context of the night before. There is one other notable thing about the setlist, besides the “Bye June” tease in the middle of “Silverfuck” — Billy closes the show by singing “Sweet Sweet” a-cappella after the rest of the band have already left the stage. To date, it’s the last time “Sweet Sweet” has ever been played live. Here and there on the fourteen-month Siamese Dream tour, Billy would occasionally close with this, to mark the end of a particularly stellar show. After a string of performances in March and April, “Sweet Sweet” wouldn’t appear again until this show. It’s clear by the end of the night that the Pumpkins have won — they captured the attention and enthusiasm of a crowd that was listless and often hostile the night before. Billy earnestly asks “Are you sure you’re into this?” before “Hummer.” The crowd erupts and affirms the band’s success and he smiles from ear to ear, and despite his best efforts to remain as pissed off and malcontent at the time, Billy can’t stop grinning and posing for the rest of the set. He even makes fun of his dour persona before “Starla,” asking the crowd to “Please tell your parents we said hello. We do love parents. My parents died in a car crash…I can’t tell them hello.” With “Sweet Sweet,” they end as strongly as they began, with a few parting words from Billy: “One more thing. When I started singing this song, I heard somebody yell, ‘Oh, it’s another one of them songs about love.’ Well, yes it is, and I’m going to keep singing them forever, too.”