A genius walks among us, still playing county fairs. 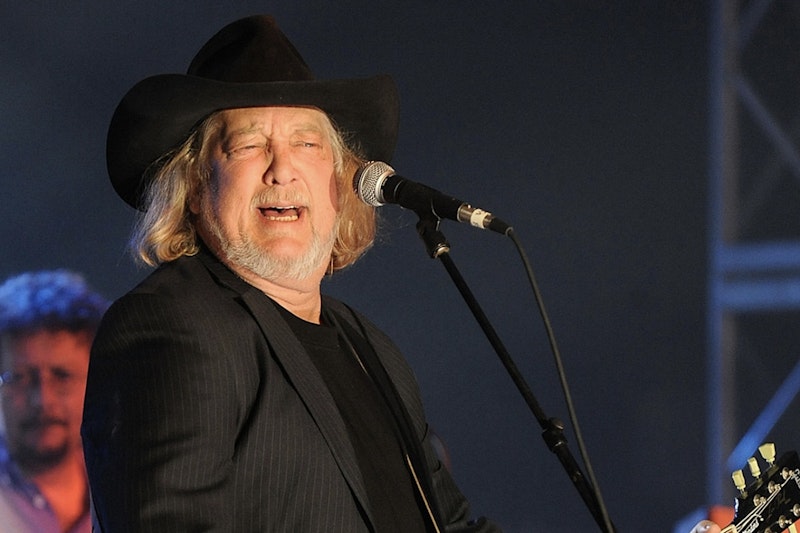 Thank God for Dan Auerbach, the Nashville player and producer who, among many other revivals and injections of energy into roots music, produced the Hank Williams Jr. album Rich White Honky Blues that I took as an occasion to write about a couple of weeks ago. But no one, even Bocephus, is more deserving of a revival than John Anderson, who's written and performed some of the best country music of the last 50 years—a man who's put 60 songs on the charts, someone I think of in the same breath as Johnny Cash or Merle Haggard, but who's been underappreciated by critics and historians until recently.

Auerbach and David Ferguson produced and helped Anderson write the beautiful Years, which came out in 2020, after Anderson recovered from a near-fatal illness. They've produced also Something Borrowed, Something New, which may be the best tribute album ever made. The cover is a photo of Anderson by Johnny Cash. It features excellent stabs at Anderson songs bysome of the biggest current country stars—Luke Combs,Brothers Osborne, Ashley McBryde, and Eric Church, for example—and some of the most interesting up-and-comers (Brent Cobb [Wild and Blue], Tyler Childers [Shoot Low Sheriff], Sierra Ferrell [Years]). They sing these great songs in a beautifully-made Auerbachian roots production environment. The album begins with what must be one of one John Prine's last recordings: a perfect version of "1959," a song written by Anderson that could’ve been written by Prine.

Anderson originated in Apopka Florida and came to Nashville in the early-1970s, working construction (he helped roof the Opry house) and pitching songs. He faced some barriers. Country in the mid-to-late 1970s was a crossover nightmare, with country-less artists such as Eddie Rabbit and country-less songs such as "Islands in the Stream," Dolly's great betrayal, sadly dominant. Anderson was traditional, though he also sounded fresh in that era. He arrived with the most distinctive of country voices, with Haggard and George Jones as models of his relatively delicate, hyper-emotive approach, and Keith Whitley and Vern Gosdin, among others, as emulators. No one's voice is more country.

That was maybe a drawback: he didn't sound much like Kenny Rogers. There were other issues. Maybe his name is a bit hard to remember: it's not "Johnny Paycheck." He moved kind of oddly onstage and had a bit of trouble connecting to an audience; somehow the distinctive way he moved and his intense facial expressions seemed essential for bring out that Voice, but didn't always connect. He seemed like a loner, indifferent to Nashville trends.

But he had great emotional and musical range. He made lushly orchestrated tear-jerkers ("I Just Came Home to Count the Memories"), straight-up honkytonk ("Straight Tequila Night") and wonderful joke songs like "Chicken Truck" or "Somebody Slap Me." There's a band now named after his classic song "Wild and Blue." I wouldn't try to tell the story of country music without "Swingin'," "I'm Just an Old Chunk of Coal," or (one of the great songs in the history of American popular music) Seminole Wind.

He kept getting dropped and disappearing; by the early-2000s he was on the county fair and Florida roadhouse circuits, more or less as predicted by his classic song Catch a Falling Star. It was an incomprehensible fate, for this person ought to be in the pantheon as one of the greatest dozen artists in the history of country music.

People seem to be realizing at last. I'm not sure John Anderson is even a member of the Opry, which ought to make that institution cringe in shame, but on Saturday there was a live version of the tribute album (missing some of the big stars, but featuring, for example, a lovely version of "Long Black Veil" by Gillian Welch and David Rawlings and "Catch a Falling Star" by Sierra Hull), on the Opry Stage. People are realizing that a Merle, a Johnny, still strums amongst us.

"Would You Catch a Falling Star"

"I Just Came Home to Count the Memories"

"Money in the Bank"

"There's Nothing Left for Me to Take for Granted"

"Bend it Until it Breaks"

"I Work a Lot Better"

"Country 'Til I Die"