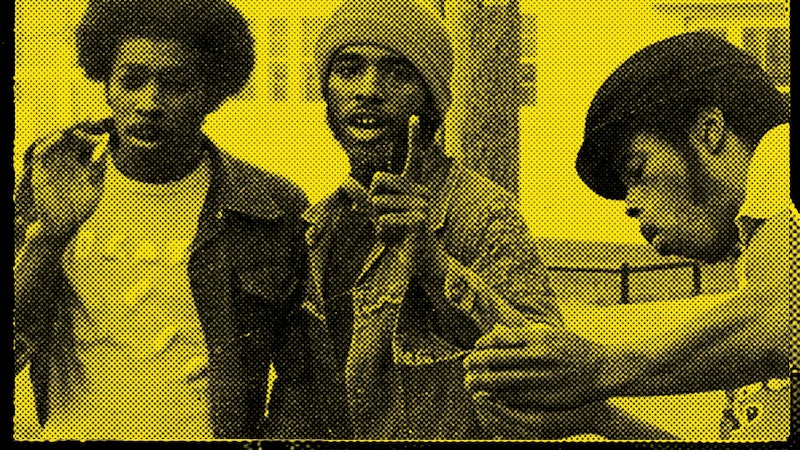 Before I saw A Band Called Death, the only band called Death I knew of was the 80s death metal outfit. While these extreme metal pioneers are rad, I kept thinking about how much more important this other Death is as I watched Mark Covino and Jeff Howlett’s new documentary. My other thought throughout: why the fuck haven’t I heard of this band before?

The film profiles the Hackney brothers, David, Dannis, and Bobby. In the early 70s, inspired by Alice Cooper and The Who as well as the funk and Motown that most other black musicians were playing, the brothers played hyper-energized proto-punk that makes The Ramones and Sex Pistols sound tame. In their songs, Dannis and Bobby create a rhythmic pocket that would make James Brown proud; and David manically shouts about governmental folly, anxiety, and alienation while playing off-kilter guitar parts. Think Minutemen + Bad Brains + King Crimson.

Coming from a poor black neighborhood in Detroit, Death prided themselves on fucking with people. Since they could pick up instruments, the three brothers irritated their neighbors, parents, and siblings with noise. They also attained a groove that bordered on psychic interconnection—something I’ve mostly only heard with sibling musicians. While I can sometimes get bored with the clumsy musicianship in early punk, Death deftly emphasizes odd beats and changes while playing fast as hell.

The documentary is pretty straight forward, consisting of interviews, frames from old pictures, and sound clips of Death’s recordings. Considering how compelling the band’s story and music are, this simple style is perfect. In 1974, Death recorded a five-song demo with a small Detroit label, which got the attention of Columbia’s Clive Davis. Like several concert promoters, Davis was turned off by the band’s name. He asked them to change it, promising a record deal if they did. Dannis and Bobby both agreed to change the name, but David refused—one of a few examples in the film of his stubborn artistic idealism that was both genius and tragic flaw. Like their music, he wanted the name to evoke anxiety, curiosity, and menace. For him, there was no other name for the band.

Bobby and Dannis eventually moved away from Detroit and started new musical projects while David stayed, regularly drinking himself unconscious. He died of lung cancer in 2000, just a few years before Death’s two-song single, “Politicians in My Eyes,” which they recorded in 1976, started to circulate among obscure music junkies.

Bobby’s son Julian first heard this single in 2008, at a party in San Francisco. Immediately recognizing his uncle David’s voice, he contacted both of his brothers, Bobby Jr. and Urian, as well as his dad. Bobby never told his sons about the band because of the emotional pain attached to it. Thinking it was time to tell the boys about their punk rock heritage, Bobby Sr. showed his sons Death’s 1974 demo, a mind blowing piece of punk history that had been collecting dust in his attic. In 2009, Drag City combined this demo and the “Politicians...” single, re-releasing the recordings under the title For the Whole World to See.

Like Sixto Rodriguez in Searching for Sugar Man, there is some redemption for Death at the end of the documentary. David Hackney’s tragic life and death always seems to loom for Bobby and Dannis when they talk about the band, but, in addition to their music reaching much larger audiences than ever before, Bobby’s sons have started a Death tribute band of sorts, Rough Francis. They play some originals, but they’re mostly known for playing Death songs. Bobby Jr. has assumed the role of front man, filling his uncle David’s shoes, and he says that Rough Francis is a vehicle to expose people to his dad and uncles’ band. With the blessing of Dannis and Bobby, Rough Francis plays the songs from Death’s EP with an energy and virtuosity that would have made people shit their pants in the 70s, which, I think, was one of David Hackney’s goals. The film isn’t sentimental, but, toward the end, I found myself getting teary about Bobby’s sons carrying on the Hackney family tradition of funky proto-punk, and also wishing that my inheritance was that cool. Hopefully Death receives a similar surge in popularity as Rodriguez after Searching for Sugarman, because we all need more Death in our lives.