The Halifax hip-hop artist on queerness, productivity, and a new album. 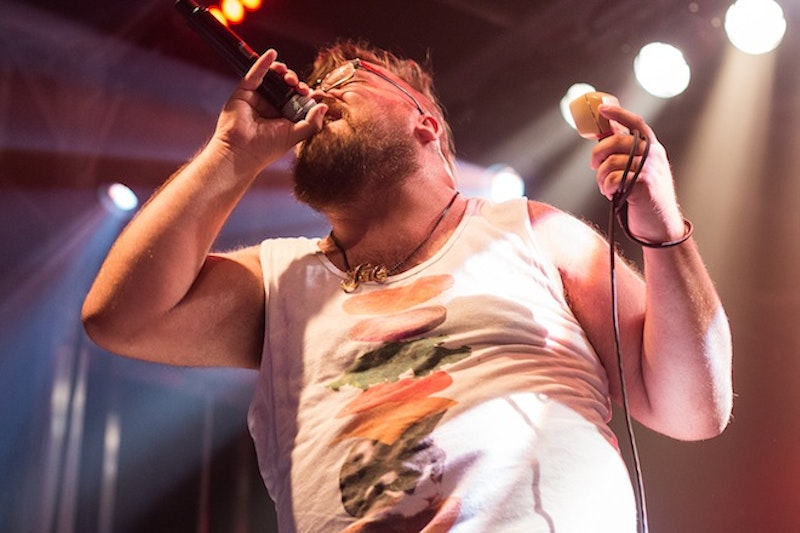 "Hey Jesse, you rap your ass off/you got no butt left," Jesse Dangerously declaims on his new song "Count to Rap Hundred." That nicely encapsulates the Halifax rapper's hip-hop persona, which is simultaneously hard-working and ludicrous—nerdcore obsessive and sweetly amateurish. It's not an accident that one of his most popular songs has a guest spot not by a big name MC, but by his (then) girlfriend, Audra, who spins through tongue-twisting lyrics with nonchalant self-deprecation. "Think I can rap?/probably just talking./Think I can tap?/Probably just walking." The video includes guest appearances by their house cats. It's hip-hop for cuddling.

Dangerously fell in love with rap as a 10-year-old in 1989 when he first heard ...And In This Corner by DJ Jazzy Jeff & The Fresh Prince. "Fresh Prince is such a perfect introduction to hip-hop, because he’s not JUST super clever and intricate, and he’s not JUST a strong storyteller, and he’s not JUST charming and funny. He’s everything," Dangerously told me. It was hard to purchase rap in Nova Scotia, but his family's cable package got Much Music, and he'd tape RapCity every week. Soon he was writing lyrics and when he figured out what samples were from reading liner notes, he started making beats. He also listened to community radio, which covered Halifax's black community, which had a small but dedicated hip-hop scene.

Dangerously loves hip-hop for its humor, but also for its honesty. One of the songs that's closest to his heart is "Coming Out Wrong," about his gender and sexuality. " Everyone that heard the lisp since seventh grade dances asked the same question./I never gave 'em straight answers, but I didn't think I liked boys,/'cause boys called me a fag so much it blended into white noise," he raps over an ominous chorus of gospelized oohs.

"Hip-hop makes sense to me as a way to talk about queer issues because of that frankness, and the legacy of artists telling their truth through rhyme and allegory and rhythm and intonation and sampling and intertextual references," he told me.

"Hip-hop is an amazing way to approach autobiography, because it’s made out of other things. You can bring a lot of sophistication and nuance to any topic using the tools hip-hop provides. I listened to thousands of people express the most penetrating truths I ever heard in my life on those tapes and records, and much of it was super political.  Some of it was even directly & explicitly sympathetic to queer struggles, like ‘Language of Violence’ by Disposable Heroes of Hiphoprisy. Just the way I never decided to make hip hop because I never considered not making it, I never decided it was the place to address whatever I could imagine addressing through art, because I never doubted it might be."

As a working musician, Dangerously's career has been up and down. When nerdcore had its moments in the early 2000s he sold a few thousand CDs and was able to quit his day job. But thanks to ADHD and depression, he had trouble producing a steady stream of albums, as he'd get caught up trying to "think of a phrase that rhymes with enough of 'let the wookie win' for eighteen months." So now he works fulltime and makes music on the side. That means he has insurance, "which means I can take antidepressants and stimulants for ADHD, so I can keep enough of a clear head to get more done on music than I did during the two years I tried to go full time."

In fact, Dangerously has a lot of music coming out this year. He's releasing one song a month on Bandcamp for a project called the Rap Hundreds. He's also finished an album called I Promised Myself.

"As a project, it started in 2012 when I got all jazzed up listening to a Toronto electro-retro rap group called Dream Jefferson, played a show with them while I was visiting, and buttonholed their producer, Corboe, to make the case that he should produce me a EP’s worth of beats in the same style. Even though he barely knew me, he surprised me by totally coming through like a champ, and sending me seven beats he’d made on hardware synths & drum machines a few weeks later."

He got his old music teacher to add surf guitar, and a barista friend to add a guitar solo—and then stalled out. He's been working on it on and off, and finally finished it recently, topping it off with a song about the depression caused by a broken laundry machine.

"I wore clothes that didn’t fit, emphasizing my fatness. I wore clothes with holes or bad style, emphasizing my insolvency. I wore the weird underwear that made my pants fall down a lot, the jeans with the groin holes, the socks that never quite got clean no matter what I did. The washer stayed broken for months, because we couldn’t prioritize repairing it, financially. I felt bad about myself all the time."

So he wrote a rap about the washing machine—set to ukulele.

Dangerously acknowledges that ukulele rap about washing machines isn't for everyone, and spending six years on an album isn't the best way to build an indie fanbase either. But, as Audra raps on "Bring Your Girlfriend to Rap Day," " If a things worth doing it's worth doing badly." Dangerously's career, like his music, has a cobbled-together feel. It's stuck together out of odd moments, broken utilities, tater tot references, and a good deal of love.