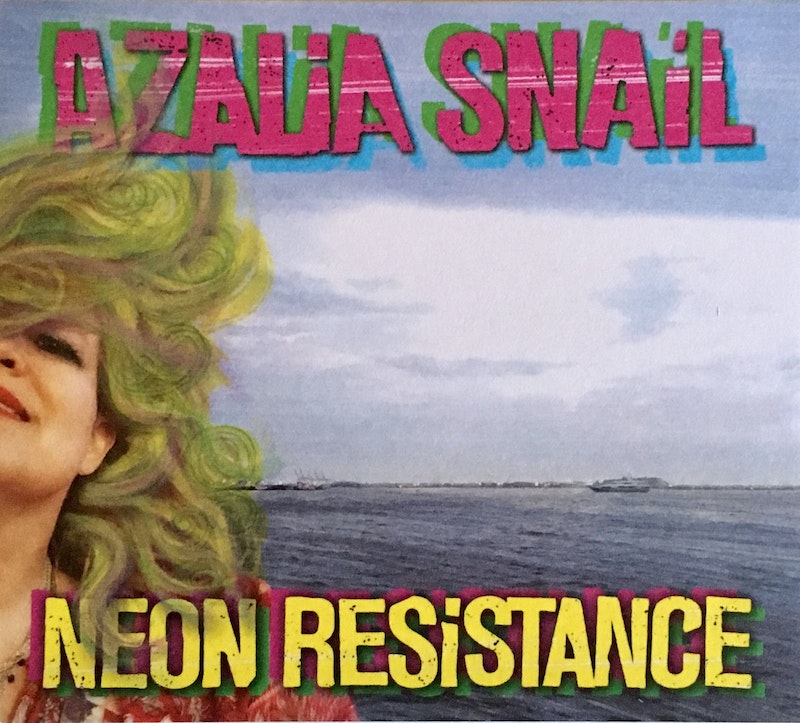 Wherever Azalia Snail’s genre dial happens to be pointed at any given moment—hazy pop rock, windswept folk, sidles into the no-fi inchoate—the Los Angeles-based artist evinces a palpable sense of joy, if not complete abandon. Her voice itself is a smile sans guile—a beatific chirp that’s the hippie equivalent of Lady Miss Kier’s cosmopolitan, empathic raver coo and a kindred spirit to the B-52s’ awe-struck Kate Pierson/Cindy Wilson axis. And at its most beautifully gauzy, Neon Resistance plays like an extended hang-glide over canyons of warm, gooey, dreamy good feeling.

Guitars abound, languorously tickling songs often built from unfrosted synths and beats. Snail’s eager sense of sonic adventure is contagious—witness the tropical, sensory overload of “The Moral Chemist,” how “Ode to Vega”pops, pulses, and spins—but she and partner/producer Dan West get higher on mysticism-tinged positivity.

The candied, Stereolab-esque “Save this Place” locates an odd uplift in a world that’s at risk of melting down; “Made Out of Honey” calls for candles, incense, third-eyelid contemplation. Californian through and through, opener “Celeste (Can You Feel It)” proffers a lush magic carpet ride to impossible heights; whatever accomplishment she’s exhorting her titular subject to achieve is a mystery, but there’s no law mandating that anyone comprehends everything, right? Maybe it’s enough to believe these words and that voice are aimed at us, and that we’re more than capable of actualizing our own far-flung dreams.