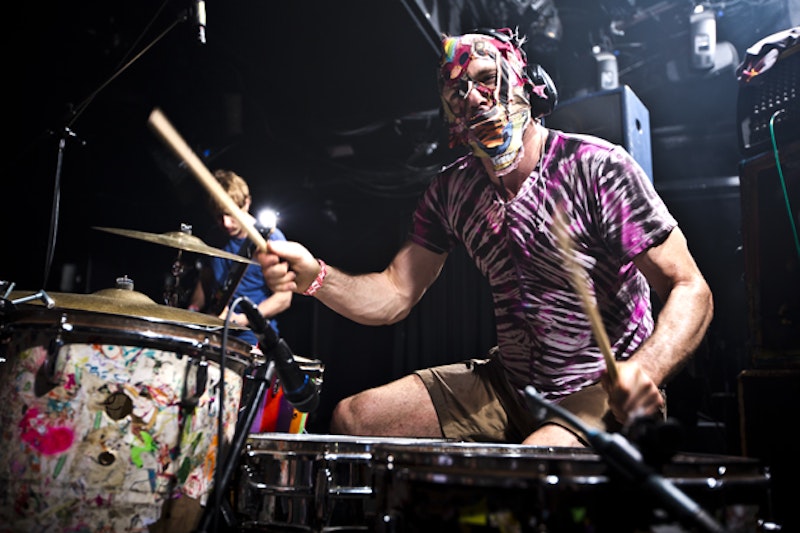 There was something profound and confounding in what the artist appeared to be about, so I bought in. She later sent an mp3 of her albums that I pored and puzzled over. We corresponded, agreed that an interview feature should happen. Her first book reminded me of Bertrand Russell’s The Problems of Philosophy, which I urged her to read. A few soft pitches to one publication ultimately went nowhere, but I was undeterred. There was always, after all, more time.

While talking up Tetris to my son we realized it was free on iTunes. We downloaded and fell into an addictive, casual competition. I rapidly reached Level 9, while he struggled to get there; I assured him that before long he’d surpass me and a few days later I was proved correct.

I haven’t completed a new poem in several months, let alone cracked a book of anyone else’s poems.

Last weekend’s Lightning Bolt show was chaos, fury, and pure testosterone; the need to keep an eye on the roiling pit meant I couldn’t focus fully on the band. Muddy sound made it difficult recognize songs I knew; new material may have been debuting. The pit continuously swallowed and disgorged a lone slim, black girl with close-cropped hair who I didn’t know but kept looking for anyway because even though she was there willingly I worried about her and felt a responsibility. David Drell was at the show too and outside the Ottobar we caught each other up on the vagaries of our lives and those of old friends who were becoming strangers, shivering in knit caps and hoodies, hands jammed in our pockets. Supposedly it was already springtime.

In February, a former editor, his neighbor, and I hoofed it up to Brooklyn to see the artist and another artist play a show. We lodged in a tiny Air B’nB walkup and tried to imagine the horror of being snowed in there. At a Thai joint before the show the ambiance was probably an employee’s iPod playlist, so an unspeakably raunchy rap song segued into teen pop; there were families dining, but no one seemed to care except the three of us.

I expressed frustrations about a publication, noting that I’d pitched an interview feature on the aforementioned artist earlier that week. An attempt was made at equimany—the inner mechanics are a mystery to me, nothing lasts forever—and there was some discussion about the state of the industry, its pluses and minuses.

Before we ate, my iPhone pinged with a rejection for that very pitch; I smiled and shrugged good-naturedly. Later at the show, the artist laid waste to a violin in a self-aware act of performance art, and I mistook Robert A.A. Lowe for Jon Nicholson. The next day at a coffeehouse-qua-vinyl store I bought a new issue of Cometbus, which this very post is probably ripping off tonally.

The most interesting, welcome gift I’ve received lately: a set of six Homedics oils for aromatherapy, advent themed. What I need to find soon: a solid meditation, regular podcast.

Last Wednesday, after my flight from Austin back to Baltimore was delayed, a good-hearted stranger invited me to be her plus one for the American Airlines first-class lounge. Inside it was hushed, spacious, and well-appointed, full of cushy chairs—the opposite of what was outside. CEOs and strategists and middle managers munched on complementary fruit and vegetables, sipped free lattes, hunched over laptops, fielded urgent phone calls. (There was also a bar and a kitchen and roving, fastidious attendants who scoped up trash and dishes.) I nabbed a free New York Times and spent three or four hours pretending I was undercover in some capacity, which was entertaining for myself and some of my Facebook friends. At the very least it wasn’t necessary to enter into near passive-aggressive combat in order to charge my phone.

The guest appearance Kim Gordon makes on a forthcoming, still-embargoed LP inexplicably fills me to the brim with joy.

After the interview pitch was rejected, I soldiered on. A new publication I’d never written for rejected it. A publication I write for ignored it. A new-ish, aspirationally interview-centered publication, run by former staffers for longer-running publications, ignored it. I teased it to the editor of a new-ish publication that fell victim to cuts not long ago but he didn’t bite.

So I sat on it. In my Austin hotel room a Facebook concert invite I regretfully had to turn down evolved into a Messenger chat with someone I feel I know but have never met. The pitch went to him; he was enthusiastic about it, and sent it up the chain with his endorsement, which means something. But the artist vanished from Facebook at some point; an email conveying the possibility that the interview we’d started talking about six-eight months earlier has gone unanswered. This is black superhero music.