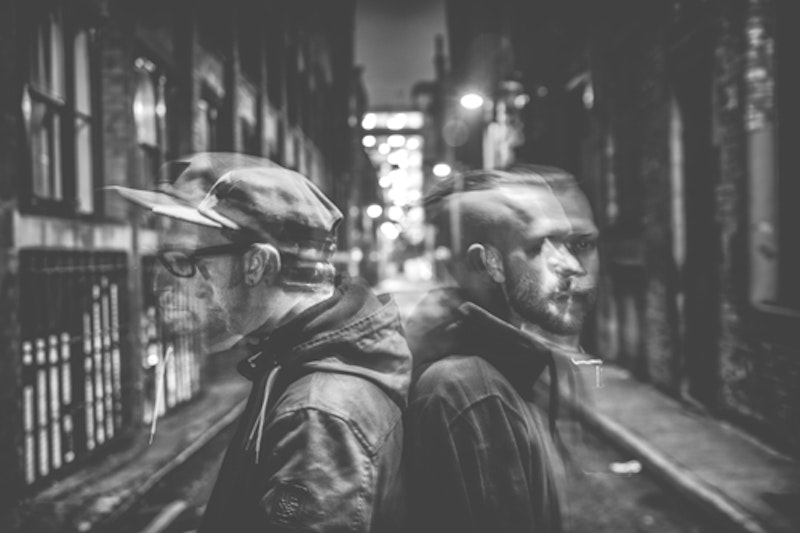 Purity in music: you're thinking about some form of atavistic authenticity; a return to a pre-commercial truth, sans autotune or keyboard or even electric guitar. Way back there on the crossroads, with one acoustic string and some bleak yodel, is really the core of music, before Coca-Cola put it in a bottle and sold it to all the single ladies.

Listening to Akkord's recent self-titled release (Houndstooth), though, you wonder if we've gotten it the wrong way round. Maybe rather than paring back crabwise into the past, music purifies through distillation, cutting away everything that would connect it to physical vibration until you get blank beats in the last abandoned factory on earth.

Not that Akkord is completely sui generis. The opening track, "Torr Vale," opens with keyboards and a stuttering heartbeat, reminiscent of Morricone's theme for The Thing, before shifting into industrial clanging, like the alien has taken up metallurgy. "3dOS" is a house/dance track, the beat interrupted by occasional dark burps and slowed-down laser zaps, a heated soundtrack for a shambling Shoggoth, who get woozier and woozier as it goes along. "Navigate" throws in some distorted vocal sounds, tying its stunned, itchy beats to a human referent, while the skittery stochastic spurts of "Hex-ad" nod spastically to Aphex Twin and other earlier arty electronica.

Purity isn't about actually being pure though; it's about a stance or a dream. Robert Johnson was as much a commercial artist as Beyoncé—his music was just tied to imagining a world raw enough that the devil was close at hand. Similarly, part of the pleasure of Akkord is the way everything seems lost in echoes and space, as if familiar genres and tunes have fallen into a time warp and ended up in some exhausted future, presided over by a bloated, dying sun. Thus the great video for Folded Edge, with vaguely organic shapes throbbing and spitting in juxtaposition with astral bodies, and semi-solids spewing as some stranded lungfish belches forth its final mournful tune. The side glance at Kubrick's 2001 on the way to ab-FX future is presumably intentional—the bold new world signaled by bold new worlds past, cemented with more bass bottom.

"Smoke Circle" is the track that most consciously plays with the idea of spaced-out future as rootsy apotheosis. The slowed, repetitive beat sounds like it's actually coming out of a drum, and the nonsense chanting blithely points its chin towards some non-specific non-Western cultural practice. Zoned out electronica guys meet zoned out New Age appropriation, which ends up forced and dumb rather than profound or affecting.

Akkord is much more convincing when it eschews the cutesy concepts and just embraces its laptop as laptop, as on "Channel Drift," where rising feedback gives way to a slow rhythm, a reluctant basement boiler coughing and spluttering as it comes online. Even better is the closing track, "Undertow," made up of beat-less, melody-less ambience, in which Moogish, watery moans lift themselves up to flop directionlessly back down, as the occasional clank of iron on iron providing a counterpoint. It's the sort of composition that feels like nobody put it together: some machine was just left running by accident and kept going until the roof rusted out and the ceiling fell in over the period of a century or two. It feels like an ode to a Mondrian painting; everything extraneous has been leached away, and all that's left is a flat, unending grid, the etiolated essence of sound in a future cleansed of us.