The racial politics of the pop charts. 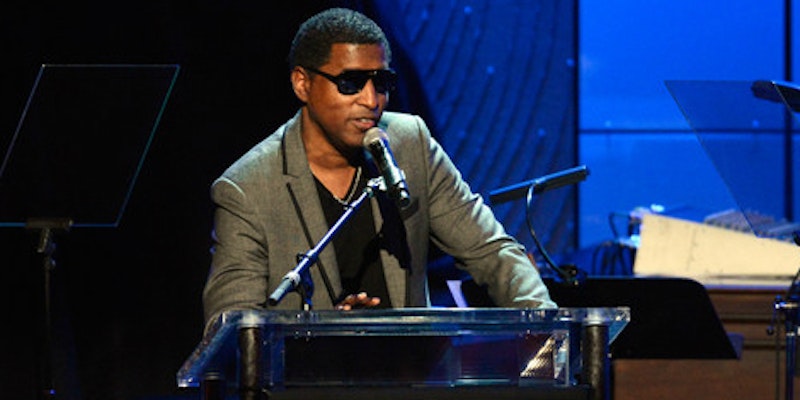 Kenny Edmonds, known to the world as Babyface, has put out a number of solo albums throughout his career, but he’s a testament to the power of collaboration—most of his biggest hits were made with others. In the 1990s, Babyface’s string of crossover successes demonstrated a Motown-like ability to get singles by black artists accepted by white audiences. But now the charts play by different rules, so his latest collaboration, made with Toni Braxton, is relegated largely to the world of “Adult R&B.”

Babyface’s commercial statistics are impressive: the artist’s website notes that he has helped in the making of “more than 125 Top-10 R&B and Pop hits, 42 #1 R&B hits, and 51 top-10 pop hits (including 16 #1’s),” leading to “single and album sales in excess of 500 million units worldwide.” He has produced, written, or played on songs and albums for Braxton, TLC, Bobby Brown, Boyz II Men, Whitney Houston, Mary J. Blige, Usher, and Brandy. (The label he co-founded, Laface Records, also put out albums by groups like Outkast.) A tremendous portion of the R&B artists who succeeded in crossing over to the pop charts in the late 80s and early 90s were aided in some way by Babyface. White artists like Madonna and Eric Clapton went to him for help and rejuvenation. Aretha Franklin and Gladys Knight, stars from a different era, worked with him when they needed late-career assistance. So did Luther Vandross, a premier 80s hit-maker in black pop before Babyface came along.

Babyface excels at slickly-packaged odes to sentimentality—often expressed as a relationship is ending—and sex. “I’ll Make Love To You,” by Boyz II Men, and its partner-in-devotion, “The End Of The Road,” both #1 hits, follow the form of standard soul ballads, mixed with some shimmery, orchestral effects; one’s about coital bliss, the other about (unrequited) love-everlasting. The popping funk of Brandy’s “Sittin’ Up In My Room,” which reached #2 on the pop charts—“seems like ever since the first day we met/there is no one else I think of more than you”—pairs nicely with Mary J. Blige’s “Not Gon’ Cry,” also a #2 hit, on which Blige sings “all the time I was loving you, you was busy lovin’ someone else.” Both appear on the soundtrack of the movie Waiting To Exhale; same message, different result. For a swinging take on an imploding relationship, consult Bobby Brown’s “Humpin’ Around,” which slammed its way to #3 with the full force of new jack swing. This can be balanced out with the lush, celebratory sensual layers of Toni Braxton’s “You Make Me High” (another #1).

One of Babyface’s longest-running partnerships is with Braxton. (He has credits on many of her albums, especially the early ones.) The two have a finely-honed sound: one part classic ballads, one part light, atmospheric funk, one part aimed at the dance floor, all three focused on affairs of the heart. Braxton co-wrote eight of the 11 tunes on Love, Marriage & Divorce. This is home court for Babyface, providing an easy setting for him to ply his trade: someone’s heartbroken, there’s old sex to reminisce about and new sex to look for. Although the focus here is failed relationships, the two artists work well together. Each singer adjusts vocally so they’re usually singing in a similar register (Babyface told Billboard, “I've let this be Toni's record. Every key is her key”). Braxton is capable of roughed-up vocal explosions, but her partner usually sings evenly, so she works to contain herself, maintaining equilibrium—except when songwriting drama requires that equilibrium to burst.

These two have been making albums for more than 20 years, but they work to imbue their music with subtly up-to-date touches. Every time the singers trade the lead in “Reunited,” there is a sudden burst of chattering hip-hop drums. The opening number, “Roller Coaster,” has the hollow low end and snapping high end favored by Drake. Occasionally, Babyface bursts through the song with an “eh” that is reminiscent of Terius “The Dream” Nash, a songwriter who, like Babyface, has had great success writing and producing for others (notably Rihanna and Beyoncé). The acoustic guitar underpinning “Where Did We Go Wrong” is a Babyface specialty; Justin Bieber’s latest album, Journals, released at the end of December, came filled with emulations of this type of strummed R&B.

So why are Babyface and Braxton, supremely successful through the 90s, only able to reach #1 on “Adult R&B” with their single “Hurt You,” a song that hasn’t even registered on the pop charts, and barely cracked the top 50 on R&B/hip-hop? There are a number of factors at play. In the last several years, black performers have struggled to land top crossover hits as the primary artist, unless their song has a massive dance beat (will.i.am, LMFAO), they happen to be named Rihanna, or both. Of the 17 top hits in 2010, seven were by black performers; most were dance songs featuring rappers or Rihanna tracks (she had three #1’s). Of the 14 songs that went #1 in 2011, four were by black performers, and two of those belonged to Rihanna. 2012 was roughly the same: 13 #1 songs, four by black artists, two by Rihanna.

As Slate recently noted, the #1 pop spot was in the hands of a white artist for all of 2013, which has never happened since Nielsen Soundscan started tracking music sales in the early 90s. Back in 1995, when Babyface helped with two #1 hits, and 1996, when a Babyface-Braxton song landed at #1, more than half the top pop songs were by black singers.

One of the primary ways for a black artist to move over to the pop charts is by rising up the R&B/hip-hop charts. (Though this year, white performers dominated that chart as well.) But getting to the top of the R&B and hip-hop pack usually requires a strong grounding in the latter—the only songs in the Top 20 in that category now without a rapper or hip-hop production are John Legend’s “All Of Me” and Pharrell’s “Happy.” Despite hints of hip-hop on Love, Marriage & Divorce, Babyface does not have a lot of rap credentials. Most of today’s star black pop producers and songwriters who have crossover potential get their start in rap and then move into R&B and pop (Timbaland, Pharrell, Mike Will Made It, Noah “40” Shebib, DJ Mustard). The Dream is a rare example of someone who went the opposite route.

Smooth black pop now exists mainly for a black audience. But Babyface carries on. He’s like one of the characters in his songs: still full of sentiment, even when it’s no longer rewarded and reciprocated by a long-time partner.