But a Unicorns reunion is what everyone really wants. 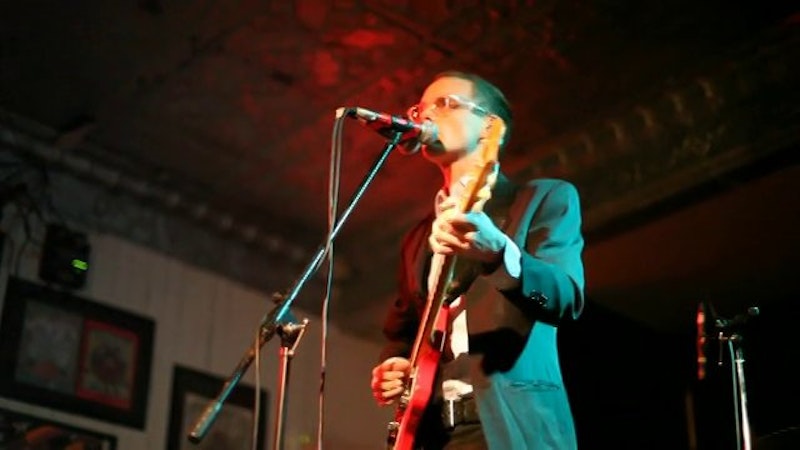 From the damaged pop of The Unicorns to the chamber prog of Clues to the pre-modern stylings of The Hidden Words to his own solo work, the music of Alden Penner is inherently quizzical, dedicated to midwifing of the enigmatic. Rarely is there a sense of familiarity in a personal sense; in its place one finds pure obfuscation wrapped in melodic expression that is shambling, chameleonic, obsessive-compulsive. Penner is an immensely talented songwriter capable of homing in on a mood pregnant with possibility, but he's as likely to capitalize on these moods as he is to squander them.

Exegesis, his debut full-length solo effort, is a case in point: it's half-brilliant and half-floundering, a lopsided question mark of an album. Scramble-skiffle love song "Losing My Head" undercuts its own too-cuteness by short-circuiting a scrim of electric guitars and toy flutes with fake Americana, but will still own your consciousness for a few hours; Morrissey-in-training salute "Lost the Skin" is similarly habit-forming, and the attention-deficit disorder coursing through "A Beautiful Dream" yields intriguing results. More interesting, thematically, is "Word," where Penner employs a two-chord piano motif and, eventually, a distorted guitar lick to sell something akin to a prayer.

Those are Exegesis' high-water marks. The rest range from curious ("No Peace") to aesthetically expected ("Louis XIV," where Penner's mock-operatic falsetto chaffs, somewhat) to inessential ("I, Icarus," which would've worked better as a Microphones B-side). Even the weakest fare is lifted by the introduction of textural gear changes from madrigal folk to heavy metal heft to standard-bearing indie-rock to whatever seems right to Penner in the moment. Odd little couplets spring here and there, like tightly wound, inconsequential traps; a couple days after going in on this record, I'm still coming to grips with whatever "help me understand the ellipsis on your hip/the tulips on my dick" is supposed to mean.

Context is key here, of course. Generally, I have the same problem with this album that I've had with the work of Islands, Nick Thorburn's own post-Unicorns outfit, save a stray tune or two: these songs are like puzzles that are only partially complete. Whenever I hear an Islands song, it's missing Penner's wooly absurdity and attendant down-tuned guitar scorches. Whenever I hear a project Penner is leading, it's lacking Thorburn's earworm-y pop smarts and wiseacre 'tude. The wan "I, Icarus" is probably unsalvageable in any circumstance—frankly, evoking that particular legend should be illegal in any art setting—but just think how awesome and funny it might become if Thorburn hopped on a remix as a sort of Greek-chorus caller, playing the belter/color man to Penner's Bud Light Real-Men-of-Genius straight man.

There's a reason why so many Unicorns fans are freaking out about a possible reunion in the coming months—with Penner claiming it's a go in the press, and then Thorburn essentially shrugging his shoulders and making a "whatever" W with his fingers—the creative interplay between these two is uncanny and surreal. The Unicorns’ only album, 2004's flawed masterpiece Who Will Cut Our Hair When We're Gone? is a landmark that neither man will ever, ever rival alone or even with Jesus Christ as a liner-notes wingman; the sooner they're able to come to grips with that and align their egos, the happier we'll all be.