“I’m here to give you that sonic cocaine.” 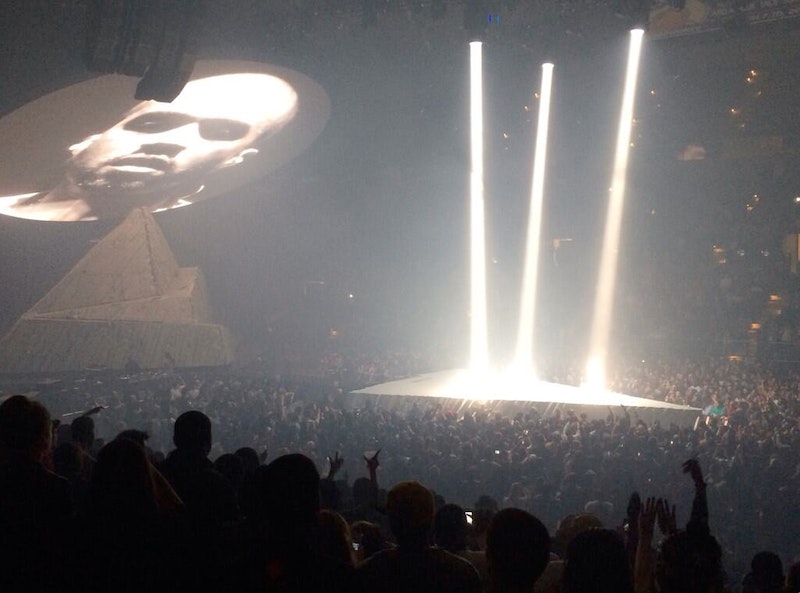 Be suspicious of someone who calls himself a genius, or makes self-comparisons to Shakespeare and Google. Kanye West has beaten music, reaching every peak, rising, falling, returning, and soaring (depending who you ask) with last year’s Yeezus, a gloriously taut and shiny ejaculate rope that will make the pages of pop history stick together in 20 years. No other artist in hip-hop has been as prolific or consistently successful as West, a Bowie-like entertainer that’s incapable of staying in the same place for more than a year. Everything about his albums, whether you like them or not, are sculpted and considered to the last detail. What other major rock star is talented, manic, and crazy enough to make the album of his life—2010’s My Beautiful Dark Twisted Fantasy—as a “backhanded apology” to Taylor Swift for storming the stage during her acceptance speech at the VMAs? Everything West does or says is another sequence, another stage direction (“Don’t talk”) in the epic (tragedy?) of his life, acted out before the world. West is a pop genius, and realizing that he’s accomplished all he can in music has led him here: with a massive chip on his shoulder, complaining that Pepsi won’t allow him to brand his own soda flavor, or calling out Nike executives by name because they don’t want him to create a show, they just want his face on something cheaper they’ve already made. Talk is just talk—why does it put so many people off when West says he’s “Walt Disney in the flesh”? He’s probably correct.

My brother and I walk into fluorescent halls already thick with blue fog at the half-empty Baltimore Arena, and we find our seats stage right as Philip Glass’ theme from Koyaanisqatsi plays over the PA, the bass rattling my head and my chest. West was prompt and generous—he came out at 8:30 on the dot, and played for nearly three hours, running through all of Yeezus, a huge chunk of his decade-old debut The College Dropout, and a dozen of his other hits like “Golddigger,” “Dark Fantasy,” “All of the Lights,” “Power,” “Stronger,” and “Heartless.” The circus of the show was spectacular and probably why the tickets were so damn expensive. It’s not some tasteless free-for-all, gaudy lasers and constant pyrotechnics. The stage itself was massive and beautiful, big but with a minimalist bent, like the record. A white mountain extending into a dagger-shaped stage, under a roving moon with projections and close-ups of West and his women, first in angelic white robes, quickly shed for flesh-colored body gloves and pasties and g-strings. They stood beside him, knelt before him, carried him, and groped him during “I’m In It.”

As the lights dimmed, the ladies came out to a recording of West saying, “I am not here right now,” which repeated half a dozen times until the chemical burn distorto synth opening of “On Sight” blared through the arena. West burst through the darkness, barking the opening verses and allowing the audiences to fill in the machine gun command “on SIGHT!” Probably one of the greatest “Fuck you” opening songs on a record I’ve ever heard. I’m at the top of the mountain, I’m richer than God, fuck it, I am a God, and there’s nothing you can argue with. “What now?” He plowed through Yeezus in the first hour, saving the beatific “Bound 2” for the very end. My brother and I dropped our jaws at the pyrotechnics of “Blood on the Leaves,” a fireball exploding at the drop as projected lava flowed down the mountain and flames shot from its edges. Cirque du Soleil stuff that made you feel like a little kid. As West has said in interviews, he wants to be “constantly four years old,” creating and pulling off these spectacles with the manic enthusiasm and giddy sloppiness of a toddler. It was more inspiring and honest than any other stadium show I’ve ever seen.

West modified his reasoning for the song “I Am a God” from that Jon Caramanica interview. Back in June he said he made the song because he is a God, end of story. Last Friday, during his mid-show sermon, West tried to warm up a crowd getting restless by explaining that “The reason I made Yeezus, the reason I made the song ‘I Am a God’ is not because I think I’m a God... that one’s for you... that’s that sonic cocaine for you, that sonic espresso to get you through your day, to make you feel invincible through your headphones when you’re out running.” Dude has to be doing bumps behind that fucking mountain—he’s never sloppy, and the show was tight as rope, an inscrutably chemical bent to his delusions—like how “Every show on the Yeezus tour has sold out!” This elicited such a loud groan of confusion: this show wasn’t close to sold out, and neither were lots of shows on his tour, like Madison Square Garden or Kansas City, where he played to 4500 people in a football stadium. West also said “That’s why we’re going until three a.m. every night.” Maybe he meant three hours... cocaine seems crazy.

Maybe because it was Valentine’s Day—his wife Kim Kardashian was there flanking the stage; half the GA area was empty, and no one was in the upper concourse. I mean, this is a small arena to begin with, and you could feel the emptiness especially when West allowed the crowd to fill in lyrics and choruses. Even when everyone shouted “on SIGHT!”, it was weak; same with the dude in the front row who got on the mic and ruined the end of “Bound 2” by screaming and warbling over that glorious loop. So there was no vitriol from West outside of his songs—you got the sense that even though it practically felt like a gig at the 9:30 Club, the audience was behind him. As West grows more and more frustrated that he’s not the king of the art world and the fashion world as well, he’ll inevitably alienate more of the hip-hop fans that liked him “before he got weird,” before rock critics opened their mouths wide to accept him, before Alexander Wang entered his lyrics. Kanye West is already arguably the biggest contemporary rock star in the world, and he hates it! He wants to be king of the WORLD! He actually said “I am permanently the away team.” He is out of his fucking mind!