The origins of the 1960s group The Curfews. 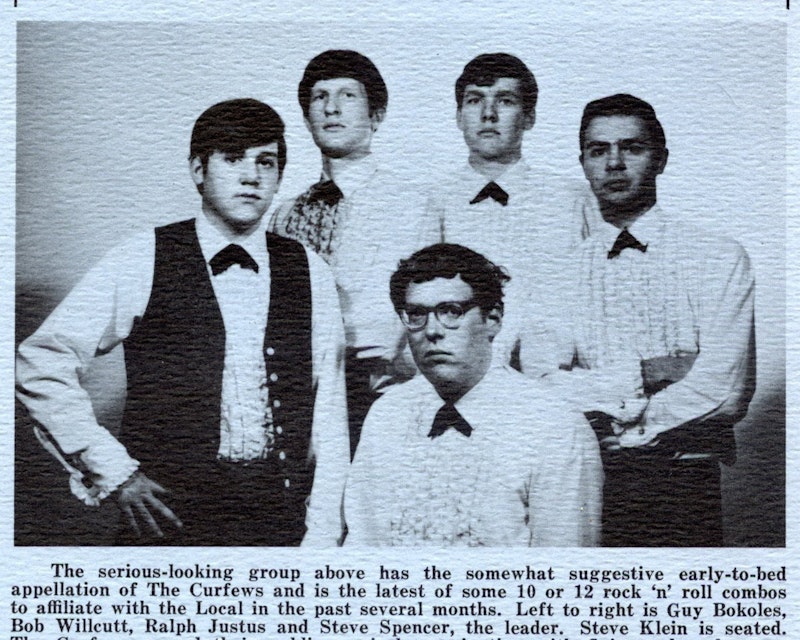 There was nothing simple about The Curfews’ formation, especially their earliest days. Everyone involved cites a different group origin. It’s still difficult to figure out how they formed, but the release of their debut single on Leonard Schwab’s Montgomery Records is a solid starting point for the story.

Leonard Schwab: “Cal Linley, former lead singer with the Newports, called to let me know he was with a new group, The Curfews. [He asked] if I’d be interested in auditioning them for possible management. I told him that I’d be happy to and went out to Kensington, Maryland to the home of Steve Spencer, their organist, and I liked what I heard so I signed them to a management contract. We recorded and released their first record on Montgomery. The single made it into the charts on Rockville, Md.’s WNIX-AM but was knocked off the by The McCoys’ ‘Hang On Sloopy’.”

Among the many details that make The Curfews’ story unique is the group’s connection to Bob Willcutt. Long before becoming a world famous luthier, before he was a published author/photographer, just before he joined psych/punk legends One Of Hours and heavy soul rockers B.W. Cat, the young guitarist was an early Curfews member. His tenure began shortly after the release of their debut 7”. Willcutt’s jagged leads were a defining element of “Look At Me”, the B-side of the second Curfews’ single.

Bob Willcutt: “The Curfews came out of The Quotations, a Woodrow Wilson High School band [from DC]… We played at the 1966 Teen Show at the DC Armory and opened for The Animals… It was a real thrill playing on stage with them, Peter & Gordon, and others. The internet claims we stole the music for "Look at Me" from the Animals’ ‘I'm Crying’, but that wasn’t the case. That chord progression has been used many times before and since. Their song was mostly vocals with basic chording. Our singer Guy had a voice as powerful as [Eric Burdon’s] but with more range.“

In addition to Willcutt, the lineup that recorded “Look At Me “ included singer Guy Bokolese, drummer Ralph Justus, bassist Steve Klein, and Steve Spencer on keys. According to Willcutt, the organist had owned and copyrighted the Curfews name which explains why Spencer was the band’s only constant member through all of its many incarnations.

Bob Willcutt: “When we went into the studio The Curfews had already recorded ‘She's Mine/ Sad Girl’ circa 1965 but this time [Montgomery Records] wanted something more raw. I used my 1956 Fender Telecaster and some kind of tube amp... The [Curfews] were doing great and rumor was they were offered a gig touring with the Vanilla Fudge, but by then I was already enrolled at the University of Kentucky.”

Rick Rowe: “Initially it was a party kind of band. We played a lot fraternity parties so it was pretty raucous. They could get pretty wild. You know, college kids and lots of alcohol. Most of them were at DC area schools, American U, GW, Georgetown, Maryland, etc., but occasionally we’d play at University of Pennsylvania in Philly. I remember first seeing people dance the ‘alligator’ there, which mostly involved writhing on the floor with beer in hand. It was just kids blowing off steam but of course there’d be an occasional fight or other excitement. Sometimes we played parties for multiple fraternities at a large hotel and there would be hundreds of revelers. We played one of these at a place called Presidential Arms in downtown DC on the night Martin Luther King was killed and the rioting began. We came out of the venue and saw nothing but police cars and fire trucks running up and down 13th and 14th Sts. We got out of town fast and it was pretty scary. We didn’t know what was to come in the days ahead. That’s one gig I’ll never forget.

“We played a lot of frat parties and a lot of R&B. James Brown, Wilson Pickett, Otis Redding and all of the Rascals.  It was just all fun. And all covers. We had four singers in the band so we did a lot of harmonies. As time went by the band evolved and the repertoire became more and more progressive, branching out to cover tunes by Hendrix, Cream, Deep Purple, Vanilla Fudge, etc.  Then the gigs began to turn more toward concerts and small festivals. Eventually people wanted to hear ‘Purple Haze’ and not ‘Midnight Hour’.”

Latter-day Curfews drummer Dave Eaton: “We were just playin’ what was popular, we didn’t really have a goal. There wasn’t a direct plan.”

Leonard Schwab: “I encouraged the members to join the local musician's union, which they did, and as a result we were able to work with most of the big band leaders in DC and get engagements otherwise not available to other bands. One national orchestra leader, Myer Davis, arranged for them to audition for producers and agents in Steinway Hall, New York. They also were booked to back up and open for recording artists that needed a union band. This led to work with The Shirelles, The Toys, and other big names. They also played nightclubs in NYC in Greenwich Village, as well as on Broadway. The Curfews became fairly well know in DC and worked many types of engagements from private parties to concerts to club engagements. They signed a booking contract with Caulfield and Associates in New York and I worked with Bruce Nichols in getting them club engagements throughout New England.”

Rick Rowe: “Lenny was the greatest.  Very professional in every way. He made a lot of things happen for our band while he also had other projects going on. He did all of our booking and promotion and had a lot of contacts and was well-respected all over. A part of his job was keeping us relative youngsters out of trouble and looking out for our well being. He came to every job we had if he was able.”

Dave Eaton: “I credit Lenny with most of the NY success and [success] down here in DC… He got us opportunities that we never could’ve gotten on our own.”

Rick Rowe: “We did a lot of ‘society’ events at the social clubs and big hotels in DC, debutante balls and the like [at The Sulgrave Club near Dupont Circle, and the Leadership For A Democratic Society club in the northwest].”

Dave Eaton: “They’d have an orchestra there and we’d do music for the young people [during the orchestra’s breaks]. We’d do a couple of sets, sometimes two or three.

Rick Rowe: “We played pretty regularly at the Rocket Room, a well-known club in downtown DC [prime stomping grounds for greasy DelMarVa stalwarts Link Wray and The Kalin Twins; the lead guitarist of the Kalins’ back up group was blues legend Roy Buchannan], the 1320 Club (a huge venue in Alexandria, Va.), and a bunch of other clubs [including Georgetown’s top rock haunts—The Bayou and The Cellar Door] for a week here and there. Back then you’d play in the same club for at least a week, rather than one night which seems to be the plan these days. Funny thing was that for the first couple of years I was too young to patronize the places I was playing in!”