Pop Music Was Awful in the 70s: Says Who?

Or, How I Learned to Stop Worrying and Love Joni Mitchell. 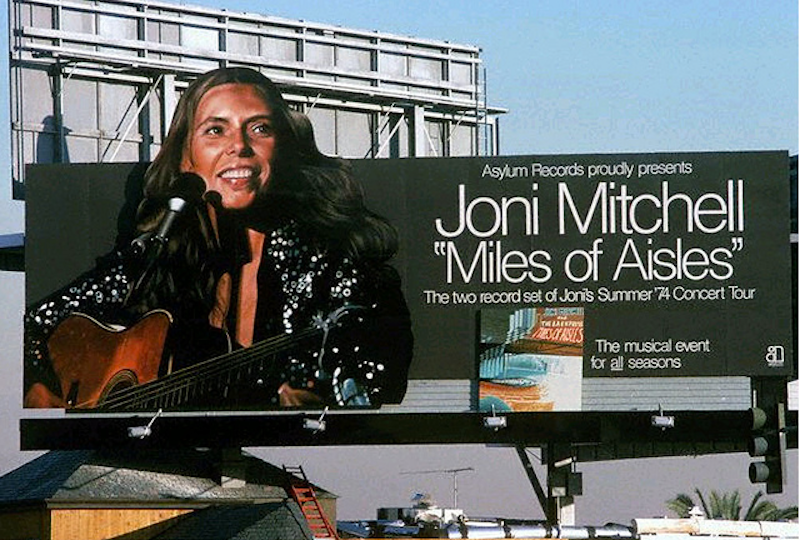 One of the enduring myths perpetuated by my (b. 1955) generation is that pop music in the 1970s sucked, a silly notion that’s almost solely backed up by one word: disco. Oh, and bloated pseudo-country rock bands like the Eagles, the post-Exile Rolling Stones, the Grateful Dead cult, all of Paul McCartney’s solo efforts and the 100 or so “new Dylans” who either never panned out or were just creations of sleazy marketing campaigns.

Never mind that punk/new wave dominated the latter half of the decade—Television, Patti Smith, Talking Heads, the Clash, Sex Pistols, the Jam, Elvis Costello, Blondie, Graham Parker and so on—or that even Yoko Ono couldn’t prevent bands like Delaney & Bonnie or the Allman Brothers (before Duane was killed) starting the 70s with a bang. John Belushi had a lot of fun on Saturday Night Live lampooning the spastic stage movements of Joe Cocker, but the British singer’s live album Mad Dogs and Englishman remains a classic.

As P.J. O’Rourke points out in a typically witty article for the Jan. 9 Weekly Standard, “How Baby Boomers Destroyed Popular Culture,” a slew of songs from just one year, 1974, are truly cringe-worthy. “Seasons in the Sun” (which Kurt Cobain perversely covered years later) by Terry Jacks may be the most atrocious chart-topper that ever fouled AM radio, followed by Paul Anka’s “(You’re) Having My Baby” and Ray Stevens’ “The Streak, a dopey novelty song inspired by a dopey collegiate fad that year. But it’s not as if the hallowed 60s weren’t besmirched by the likes of Engelbert Humperdink’s “Release Me,” the Archies’ “Sugar, Sugar” anything by the 1910 Fruitgum Company or Ohio Express and Bob Lind’s aching-for-parody “Elusive Butterfly.”

Like O’Rourke, who at 64 laps me by eight years, I’m barely conversant when it comes to pop tunes from the past 15 years or so—save a few songs or groups that my kids have smuggled onto my iPod—but the 70s, from start to finish, was a great decade for music. Ever heard of a guy called David Bowie? And: Roxy Music, Steely Dan, Stevie Wonder, Neil Young, the Spinners, Al Green, Hot Tuna, Tom Waits, the Who’s Quadrophenia and Who’s Next, Gram Parsons’ two solo records, Randy Newman, Dylan’s Blood on the Tracks, “Lady Marmalade,” John Prine, Van Morrison, Marvin Gaye, Lou Reed, The Band, the Stooges, the last gasp of Traffic and Bruce Springsteen. It doesn’t take much spunk to poke fun at Elton John these days—or, for that matter, the past 30 years—but you could construct a killer double-CD from his early material, right up to Goodbye Yellow Brick Road. (Contrary to O’Rourke, I think “Benny and the Jets” was a terrific song, if upended by Elton’s “Love Lies Bleeding.”)

Then there’s the Joni Mitchell puzzle. Until about a month ago I hadn’t even thought about the once-prolific singer, hardly remembered that in the early 70s I loved her records, especially Blue, For the Roses and Court and Spark. Sometime later in the decade, probably when punk took over, Mitchell acquired the reputation of being a “singer for chicks” and was routinely dismissed by former male fans. Like me. Not that she was consigned to the bin occupied by Billy Joel, Stevie Nicks, Aerosmith or ELO, but as Mitchell got scratchy and defensive in Rolling Stone interviews, and released less accessible records that didn’t sell well, I had no interest and gave no prominence to her LPs in my collection. Maybe Ladies of the Canyon served as a flat surface on which to roll a joint, but that was about it.

Mitchell retained a small fan base, mostly women I think, but essentially disappeared. One of my sisters-in-law remained true, and talked reverentially about “Joni” and I just rolled my eyebrows. When I met my wife in 1989, she also revealed a soft spot for Mitchell, even though her taste ran more to Etta James, Sam Cooke, William Bell, Otis Redding, Booker T., Percy Sledge, Bonnie Raitt, Laurie Anderson and obscure old soul and r&b songs.

Anyway, I was browsing in a small record shop in Manhattan a week before Christmas and came upon Mitchell’s live double-LP Miles of Aisles. I’d seen that tour in the summer of ’74 at the Nassau Coliseum and thought it was a fantastic show, although not everyone in the audience agreed, booing when Mitchell re-jiggered some of her old chestnuts with a quasi-jazz band, the L.A. Express. I’ve listened to the record a couple of dozens time since, and am knocked out by the live versions of “You Turn Me On I’m a Radio,” “Rainy Night House,” Cold Steel and Sweet Fire,” “A Case of You,” “The Last Time I Saw Richard” and “Real Good for Free.”

I’ve returned to some of Mitchell’s albums from the 70s and, despite an annoying cheeriness on a number of songs, they hold up pretty well. In particular, “Raised on Robbery,” with Robbie Robertson playing electric guitar, “Car on a Hill,” and “People’s Parties,” all from Court and Spark and “Let the Wind Carry Me,” from For the Roses, stand out. A lyric from the latter strikes me as smart as it did when I was 17: “Papa’s faith is people/Mama she believes in cleaning/Papa’s faith is in people/Mama she’s always cleaning/She don’t like my kick pleat skirt/She don’t like my eyelids painted green/She don’t like me staying up late/In my high-heeled shoes/Living for that rock ‘n’ roll dancing scene/Papa says ‘leave the girl alone, mother/She’s looking like a movie queen’.”

I’m not about to explore Mitchell’s post-Spark catalog, but I can’t deny the pleasure returning to these records has brought me. Not only that, but it confirms that the 1970s, like any other decade, was teeming with great pop music.