A Reunion of Convenience?

At the Drive-In announce they're getting back together. Who's broke? 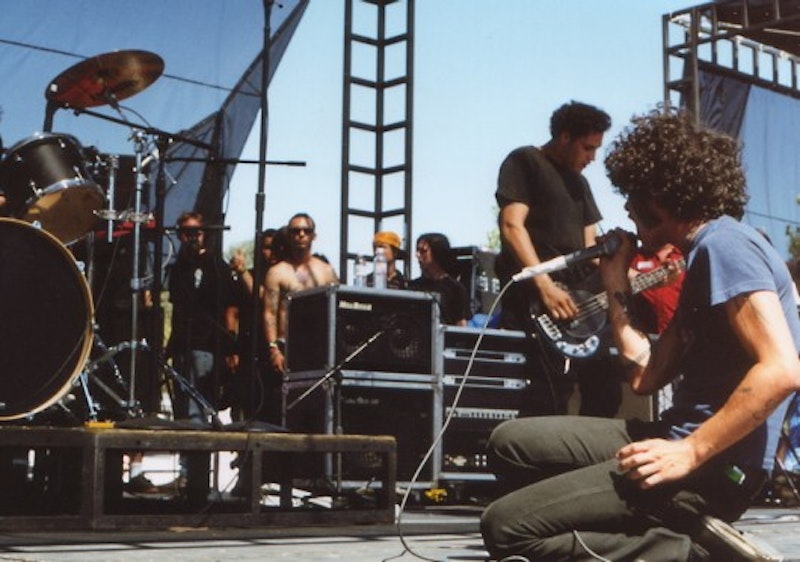 Which members of At the Drive-In are broke? The El Paso rock group, one of my all-time favorite bands, announced they were reuniting this week, after 12 years of categorical denials and sniping in the press. ATDI broke up on nasty terms in 2001 over creative disagreements, drug addiction, exhaustion, and the blowback from Relationship of Command, a shiny, shimmying hulk of a record that could’ve made them the next Nirvana if they hadn’t imploded. Supposedly Cedric Bixler and Omar Rodriguez wanted their next album to sound like Piper at the Gates of Dawn, and Jim Ward, Paul Hinojos, and Tony Hajjar wanted it to sound like Weezer. The former birthed the occasionally brilliant but usually baggy The Mars Volta, and the latter founded Sparta, a boring and aggressively mediocre whiny boy band that broke up a few years ago. It’s hard to imagine them in the same room. Rodriguez once said playing with ATDI again would be like shagging your high school girlfriend.

Bands from the 1980s and 90s continue to reunite because there’s no one up to replacing most of them. This generation doesn’t have a Pixies, Police, Rage Against the Machine, Smashing Pumpkins, or Loveless, so it’s big, easy money for has-beens, broke or saddled with mid-life crises. We all know the My Bloody Valentine reunion is bullshit: Kevin Shields and Bilinda Butcher sleep talking through a cacophonous guitar holocaust while the dough keeps rising backstage. You don’t need to make a new record: why bother? Loveless isn’t going away, and neither is Doolittle or Psychocandy. But it’s just depressing imagining Sting and the rest of the Police arriving in separate helicopters and going on stage with such a tight, choreographed Cliff Notes of a set. The nostalgia fix isn’t worth 50 bones but ya gotta see ‘em before they’re dead, man! At least people like Robert Pollard and Billy Corgan keep writing songs, even if they’re crummy. It means there’s still a real band there.

This is what makes me so nervous about an ATDI reunion. These guys don’t like each other, and there is no chance there’ll be any new material (The Mars Volta is still kicking and have a new record out in March). Speed and crack fueled their freight train of a live show in the 90s, now it’s financial security. The only way I see them matching the intensity of stuff like this and this and this is to properly summon the precision and whirling, bright, sharp sound of their studio output. Rodriguez fucked his guitar parts up nightly but his work on In/Casino/Out and Vaya is stunning. His dissonant, slithering style infused what would have otherwise been a pretty standard emo band from Texas into a William Burroughs/Black Flag/Pink Floyd colossal tryst. Anyone who’s heard Frances the Mute knows who the real geniuses were.

Best case scenario, we get some wild, emotional shows and a good live document; festival appearances where they play more than three songs before walking off (“YOU LEARNED THAT FROM THE TV, YOU DIDN’T LEARN THAT FROM YOUR BEST FRIEND”); and at least the appearance of cooperation. I’m ecstatic they’re back, but I have a feeling this is a one-shot deal.