Charlie Louvin's life was less dramatic than his songs. 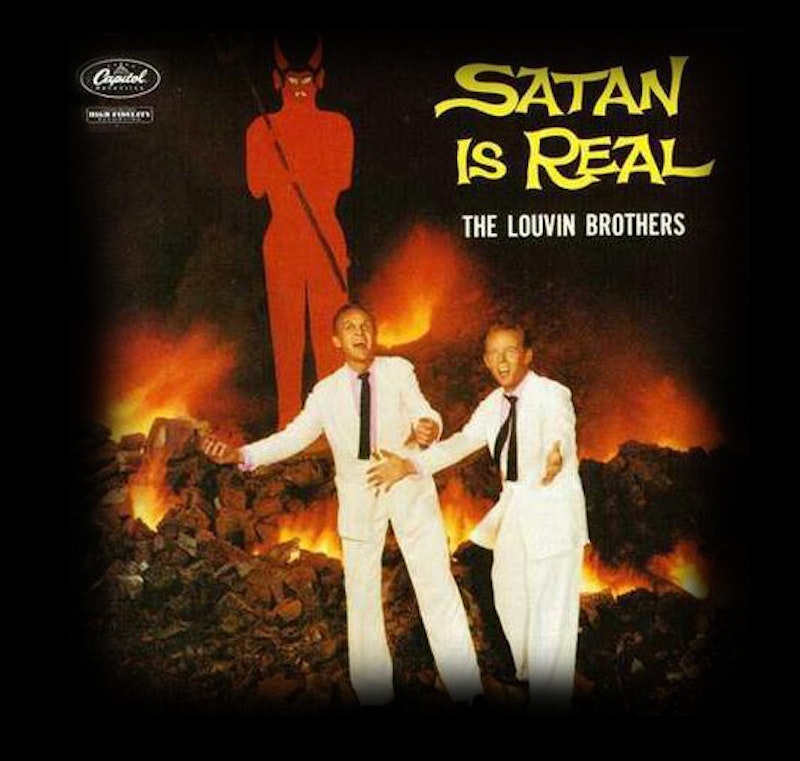 Satan Is Real is a dramatic title. The album of that name, the Louvin Brothers’ 1959 gospel doomfest, lives up to it, from the title song's vindictively mournful recitative ("Preacher, tell them that Satan is real too,") through a litany of terror, sin, remorse, and moral scolding, all the way to the closing prayer for death (“I'm Ready To Go Home"). And then there's the famous album art, with its giant clearly cardboard, buck-toothed devil towering over the white-suited Louvins as flames crackle in the background—the hyperbolically campy package for the hyperbolically moralistic interior. It’s no wonder hippie authenticity-worshippers like Gram Parsons and Emmylou Harris couldn't resist the Louvins. Listening to this album meant you could bathe in the salt of the earth by listening to your lifestyle condemned in sublime harmonies, then turn to the record cover, toke up, and laugh your ass off.

Charlie Louvin's autobiography is also called Satan Is Real, and it has the same cover photograph as the album. It makes a go at the fire and brimstone in the text as well—the book opens with Ira Louvin drinking himself into a stupor, calling his mother a bitch, and getting cussed out by his brother.

Where the Louvin Brothers might turn a (cleaned up version) of that anecdote into a moralistic tale of repentance and/or eternal damnation, though, Charlie's prose version never breaks out the flames or the cardboard devil. It's just a sad story about his drunkard brother.

That's the case for the book as a whole, too. There's certainly a lot of unpleasantness; the Louvins’ dad beat them, especially Ira, mercilessly, and set them to work in the cotton fields till their hands were cut and bloody. Ira was a temperamental artist and a mean drunk, breaking mandolins, chasing women, and generally behaving like a horse's ass. In one famous incident, Elvis came to the Louvin's room to tell them that the gospel they played was really his favorite music. Ira, in his usual people-pleasing way, grabbed the King by the throat and hissed out, "If that's the music you love, then why do you play that nigger music!"

Or at least, that's the story. Charlie, who was there, insists that Ira didn't strangle Elvis and wasn't shouting. Apparently, his dickishness was sufficient to keep Elvis from ever recording a Louvin Brothers tune, though—not the first or last time that Ira cost Charlie a heap of money.

The brush with Elvis is in part well known because it's emblematic. Charlie and Ira were playing old timey brother duets at a time when country was morphing into rockabilly, grabbing up a whole new generation of listeners and leaving a generation of artists behind. Charlie grumbles a little about contemporary country and those damned kids on his lawn, but mostly you see the shift play out in his career. Ira and Charlie wanted to be Roy Acuff, but they never got as famous as their idol. By the time they were on the Opry, the demographic gold was kids shaking their booties, not new urbanites looking to their radios for a reaffirmation of rural values.

As a result, Charlie was a second-tier star, the less mercurial half of a moderately successful duo—and his autobiography reads quiet. It's not a rag-to-riches story so much as a rags-to-decent-comfort story. Charlie's got a ringside seat to Ira's mess of a life—the alcoholism, the serial divorces, the fights, the whining, the typical grinding, pointless stupidity of addiction, the early death (in 1965, on the highway where, improbably, it was the guy in the other car who was drinking.) But a ringside seat isn’t being in the ring, for which, I'm sure, Charlie was grateful. He himself didn't drink and managed his career carefully—he had a number of minor solo hits after he finally broke with Ira. He also had a long, happy marriage to his wife Betty. In fact, the most affecting part of the book is practically the first thing in it; the dedication.

And for my wife, Betty. I remember when the country singer Carl Smith's wife died, and I went to her funeral. Carl was the steadiest man I'd ever met, just as solid as a table. But when they were doing the last eulogy, he absolutely went to pieces. It shook me up so bad that I had to go out into the yard to get over it. And right there in the yard, I prayed to God for one request, that whenever I go, I'd go before you. I'm just not that tough that I could make it without you. I know that. Just as I know that I've needed you with me every step of the way.

Charlie's God isn't a God that throws drunkards into the pit. Instead, he's a God who understands and forgives human love and human weakness. It's maybe not a God who makes for an especially dramatic song or book, but it does seem to be a God who makes for a decent life. And a decent death as well; Charlie got his wish.  He passed away shortly after he finished the book. His wife survived him.