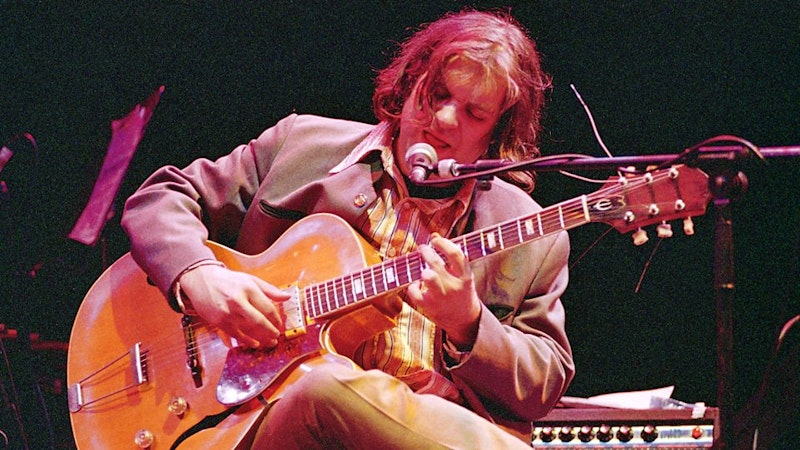 This past June, legendary sound artist and song-sculptor Jim O'Rourke released the instrumental Sleep Like It's Winter on the newly-founded Japanese label Newhere Music. Born in 1969 in Chicago, O'Rourke has a massive body of work and has consistently been one of the most prolific artists of his generation. According to Discogs, O'Rourke has left both Jandek and R. Stevie Moore in the dust with 154 total releases. A known sound-connoisseur residing in the countryside outside Tokyo, O'Rourke has never done the same thing twice. The 1997 Drag City steeple Bad Timing showcases O'Rourke's ear for harmony and melody while the following Conrad-esque Happy Days blurs the barrier between what music is and what it can be. For eight minutes, a bleak sounding acoustic guitar is plucked discordantly, coming to and falling out of rhythmic beauty, until a large droning tone ultimately overtakes the piece. O'Rourke's ability to alternate between masterful head-bobbers to tape-collaged field recordings to dynamically-diverse musique concrete is only halfway to understanding the process behind the work.

By 25, O’Rourke had worked with avant-garde luminaries such as Henry Kaiser, Eugene Chadbourne, and Derek Bailey. Other notable artists and groups he's worked or collaborated with include Keiji Haino, Wilco, Stereolab, U.S. Maple, Brainiac, Smog (Bill Callahan), Melt Banana, Nurse With Wound, Guided by Voices, Bobby Conn, and Cynthia Dall. And everybody knows he was in Sonic Youth from 1999 to 2005. Not to mention his collaboration with David Grubbs as Gastr Del Sol, releasing eight albums as a duo, with their final album, 1998’s Camoufleur, widely regarded as a masterpiece and precursor to the annoyingly-titled genre “post-rock."

It's a lesser-known fact that his finger picking is heard on the closing track "Juana" on John Fahey's 1997 album Womblife, which was recorded in O'Rourke's bedroom. The story goes that Fahey, who during this era was more interested in abstract spaced-out sound, set out to prove to his critics and peers that he was still capable of performing his acclaimed finger picking style. After a couple of failed takes, Fahey supposedly fell out of his chair and stormed out of the studio in frustration, directing O'Rourke to finish the song. “I think one of the things about the record before was I think he was stung by people saying he couldn't play guitar anymore. He could play that track. He just didn't want to that day,” claims the O'Rourke (Dance of Death: The Life of John Fahey, Lowenthal.)

The three most beloved albums in O'Rourke's discography are Bad Timing, Eureka, and Insignificance (all titled after later period Nicolas Roeg films). This trilogy reinforces O'Rourke's status as an influential songwriter and musical arranger (Richard Linklater recruited O'Rourke as the music consultant for his 2003 film School of Rock.)

The 2009 instrumental The Visitor is nothing to dismiss either: a sequel of sorts to Bad Timing, released eight years after Insignificance, O'Rourke plays every single note on the record, assembling a 38-minute movement of spliced arrangements and off-centered melodies. There are more than 200 individual tracks and dozens of instruments on The Visitor, including 10 seconds of trombone, which O’Rourke spent six months learning to play just so he could record his own part. Listening to The Visitor is like ascending toward a sea of clouds, reaching upward but never arriving to any destination but enjoying the ride nonetheless.

What resonates most about O'Rourke is his keen appreciation for music. His ability to transcend genre and his gift for using pure sound as an instrument are essential to the history of experimental music. Reminiscent of early-1980s Eno, Sleep Like It's Winter sounds like a rainstorm passing through an empty desert town after a long draught. No damage is done and the world is mostly unchanged. Only a few lingering locals are left, awestruck by the beauty of the passing creation.

It's ambient music at its finest, but those weren't O'Rourke's initial intentions: “I didn’t set out to make an ambient record but it’s sort of about making an ambient record more than it’s an ambient record,” says O'Rourke in an interview with Ele-King. This intricately layered 45-minute piece weaves in and out of dense textures, pulsing tones, and silence. In fact, silence is the crucial element to this piece—the steeple. “Silence is kind of like an audio punctuation as well and it can be a comma or it can be a period. Or a semi-colon. Of course it matters what comes before and what comes after, but you really can hear the difference between a period and a comma,” said O’Rourke in an interview earlier this year.

Whether or not you listen to this record as an O'Rourke fan, an ambient music lover, or both, it’ll leave you pondering the concept of sound. It’s a rare modern gem that will soon be mentioned in the same context as Music for Airports, Deep Listening, and The Disintegration Loops.