Global Queen, That Phenomenon of the 1980s

And how the clone look saved America. 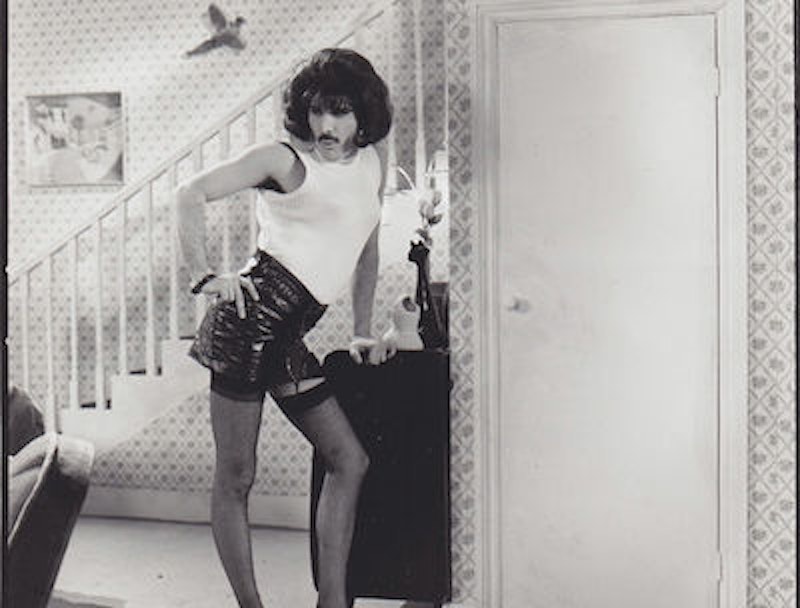 “One Vision” is a good song to avoid: strenuous and dumb, it’s saved from dogmatism only by vapidity (“One man, one goal, one mission/One heart, one soul, just one solution/One flash of light, yeah, one god, one vision”). Queen launched it upon Europe after the band’s triumph at Live Aid. America gave it a miss, as it did most of Queen’s output during the 1980s. In so doing, the United States avoided some pain, since Queen’s standout numbers date almost exclusively to 1980 and earlier.

On the other hand, America doesn’t mind bad music. The suspicion grows that the U.S. took four years to notice that Freddie Mercury had changed his act, and that the U.S. then recoiled. The 1970s Mercury had been androgynous and lithe in the long-haired Jagger–Bolan manner. Then came 1980. Freddie from “Another One Bites the Dust” and onward was a short-haired, bristly-mustached gay man with an aggressive hip-shoulder ration. He’d gone clone, like the guys in the Castro. He was a gay man dressed up to go among other gay men. Admittedly “Bites the Dust” was Queen’s biggest hit in the U.S. or elsewhere. But by 1984 the big guy had caught on. The video for “I Want to Break Free” featured Mercury combining his clone look with pointy tits and a leather mini. “It was unthinkable for Middle America,” says Brian May, Queen’s guitarist, reflecting on the mess in the fascinating BBC documentary Queen: Days of Our Lives. MTV banned the video, and Queen never charted in America again.

“The funny thing is, we became global but we kind of lost America,” May says. “And we never got it back.” But global Queen was still a phenomenon. First, the band’s management noticed that some outlying countries had the odd stadium or arena. Queen could go there: Argentina, Brazil, South Africa—the middle-class countries of the world.At the timethese tended not to be democracies. The generals in Argentina wanted to know why they should let a vast crowd gather in one space. The band’s manager, Jim Beach, says his answer was that, “rather like gladiatorial matches, this was panacea to the people.” South Africa, still under apartheid, was shunned by much of the world. But Queen went there for a resort appearance. “The principal reason Queen went there, undoubtedly, was that they were offered a great deal of money,” the band’s manager recalls.

Live Aid brought the second phase of global Queen. Days tells us that at first Freddie was reluctant to take part. But he came around and gave a reason why: “Let’s face it, all us rock stars still want to be in the limelight, and this is going to showcase us… Okay, we’re helping out. But from the other point of view it’s going to be a worldwide audience, an over-all simultaneous broadcast... I doubt there’s one artist who’s going to appear who hasn’t realized that fact.” (He’s quoted in Lesley-Ann Jones’ rambunctious Bohemian Rhapsody: The Definitive Biography of Freddie Mercury.) Live Aid had a total viewership of about 1.5 billion. Queen killed, and Freddie set his heart on singing at the 1992 Olympics in Barcelona. His ideal was seas of people and continents of viewers, all brought together by the desire to look at him and to do what he said. David Richards, the band’s producer through the 1980s, remembers, “Freddie said, ‘What we do is like the Olympics. It’s people believing in you and everyone behind you and everyone doing the same thing together. That’s Olympics. That’s what we do.’”

To zoom out, we have the mass celebration of some striking spectacle, with the celebration done by scores of thousands of people gathered within a structure made of concrete; television is a definite added possibility. Looming behind the fussed-over thing (athletic performance, a pop act) is the lofty idea of global unity, which exalts and justifies the fuss. The world is proving something to itself, or so goes the idea. Competitors from all over the planet meet together. Or, even better, the rich part of the world is raising money to save people in the poor part. Or else Western stars journey to some lower-ranked part of the planet, bringing that section up a notch.

Viewed differently, Queen turned over the world’s seat cushions in search of stadium audiences. While doing so, it showed the same standards as the Reagan administration, doing business with generals and Boers. Then it glommed on to a giant audience gathered for global uplift, scoring a hit performance that the band followed up with a lucrative tour of Europe, the richest part of the world to bear stadiums while being outside the U.S. All in all, the band comes off as rather crafty and self-interested. But it’s hard to find any harm that resulted. “Wherever Queen went, it was as if they were bringing freedom and peace to the people,” says an Argentine admirer. “It was as if they were the band of liberty.”

The chronology does match up: Argentina and Brazil toured in 1981, both democracies by 1985; Sun City visited in 1984, apartheid gone 10 years later; Hungary visited in 1986 (“the first stadium concert behind the Iron Curtain,” says the manager) and Eastern Europe breaks free three years later. The late 20th century’s great wave of democratization was about to break. In the meantime, various strained regimes found themselves giving an inch. For instance, many of their subject peoples wanted to see an individual prancing about on stage and being about as individual as a person could be. That was Freddie Mercury. True to type, this individual collected a great deal of money and acclaim, and then got on a plane and went elsewhere. The subject peoples don’t seem to have minded. Perhaps they would’ve taken the same deal themselves.