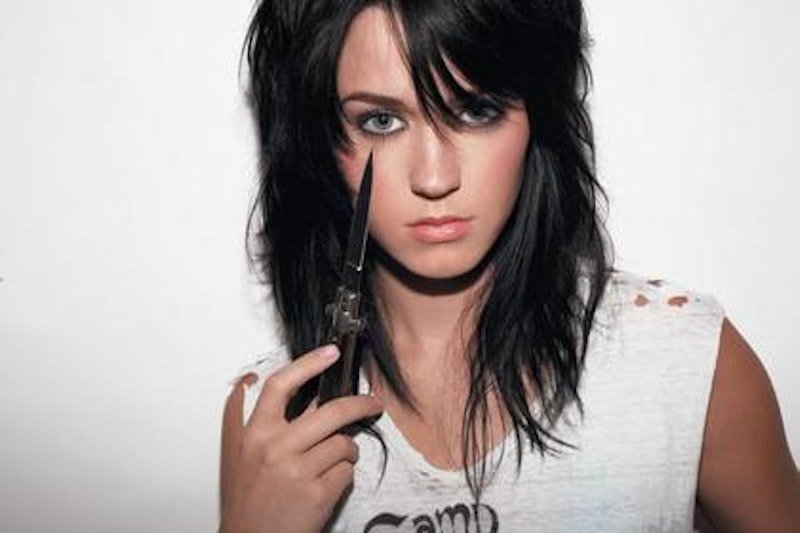 I’m not particularly in the know when it comes to new music—I don’t listen to the radio or track the Billboard top 100; I don’t scour MySpace looking for indie bands—so for new artists to pop up on my radar, they really have to be doing something right. I’ve been hearing about Katy Perry all over the place for a few weeks now: how insanely hot she is, how she has two gay-themed songs, how she’s making girl bloggers everywhere want to go out and kiss other girls! And her song “I Kissed A Girl” is the number one downloaded song on iTunes! I figured I better give her a listen and see what all the fuss is about. Who is this awesome lesbian who’s tearing up the charts?

I don’t get it. Maybe it’s just not my style of music. Dance pop is fine when I want to get my eardrums blown out in a club and wake up the next morning with a raging hangover and my temples still pulsing from too much bass, but it’s none too likely to top my must-play list. Or maybe it’s the over-manufactured vocals that leave Perry sounding like a no-talent robot that really turns me off. But what actually bothers me most is that she’s not even a lesbian, not even close. Here I was excited to discover a pop singer that would break the cookie-cutter, blonde hair, big boobs, semi-respectable-dance-moves mold and provide a divergent viewpoint from the standard boys-are-cute-and-girls-are-innocent-but-sexy theme that dominates the genre. Instead, Katy Perry not only fully embraces the sex-lite quality of pop music, but has the audacity to act like she’s particularly daring for doing so. Her “gay-themed songs” aren’t homosexual anthems, they’re homophobic tripe that play directly into heteronormative conceptions of sexuality and gender-appropriate behavior.

Her first single, “Ur So Gay,” is a vengeance-seeking break up song that reads like little more than a laundry list of gay male stereotypes: her ex-boyfriend wears scarves (from H&M no less!), doesn’t eat meat, drives electric cars, is super pasty white and skinny and—according to one real lyrical zinger—has a really tiny penis, or maybe no penis at all. His supposed hypomasculinity leads Perry to one profound conclusion that serves as the song’s refrain: “You’re so gay, and you don’t even like boys/ No you don’t even like boys.” Correct me if I’m wrong here, but if you are a guy who doesn’t like other guys, you are in fact not “so gay.” The implication is not that this guy was attracted to members of his own sex, and that’s why the relationship failed, but that he was simply more feminine than he was masculine, and therefore obviously gay. It is a remarkably offensive song that speaks to our culture’s reliance on understanding sexuality not in terms of sexual attraction, but as a construct of ingrained notions of acceptable gender behavior.  And despite what Perry clearly believes—as evidenced by any of her videos—it doesn’t make her cute and endearing.

But don’t despair; Katy Perry’s not really homophobic. “I have a lot of friends who are gay,” she told The Advocate, and Freddie Mercury is one of her main influences. Not to mention that the second single from her debut album One of the Boys is aptly titled “I Kissed A Girl.” Based on her own real life experience (“I have kissed a girl,” she said in the Advocate interview), “I Kissed A Girl” is hardly novel or inspired, playing right into the tired story of girls kissing girls just for fun.

The self-aggrandizing tune is meant to equally shock and excite the listener, but it’s really just a bland tale of Perry boozing it up to the point of diminished inhibition, kissing a girl and—oh my god!—enjoying it. So what? Katy Perry isn’t the first girl to get drunk and kiss another girl. Jill Sobule sang pretty much the same song, with the exact same title, more than 10 years ago. So you kissed another girl? Welcome to the club, it has a lot of members. Just as being perceived as gay is still a monstrous insult to most straight men, experimental lesbianism is currently very chic and fashionable—even Lindsay Lohan is doing it! Lesbianism has become less of an active decision that carries considerable socio-cultural consequences for homosexual women and more of a desirable fad that women use to look and feel more sexy in front of straight men. Perry’s line “I hope my boyfriend don’t mind it,” expresses not an actual hope, but a coy recognition that he will, of course, enjoy it. Lesbians are hot; what guy doesn’t fantasize about two girls?

Rather than inspiring acceptance of homosexual lifestyles, “I Kissed A Girl” further trivializes lesbianism and perpetuates the notion that sexuality should always be framed in a way that is pleasing to straight men. Perry admits that kissing another girl is “not what good girls do/ Not how they should behave.” But there’s nothing bad or naughty about being attracted to other women. There’s nothing sordid about being a lesbian. If you want to kiss other girls, kiss them. If you want to have sex with other women, do that too. It is time for straight women to stop treating lesbianism like some kind of kinky experiment. Sure we should be free to express our sexuality in whatever way we see fit, but can we please stop kissing other girls for the sole purpose of appearing more attractive to men? Not if Katy Perry has anything to say about it.