Nice Guys Finish You With Guns 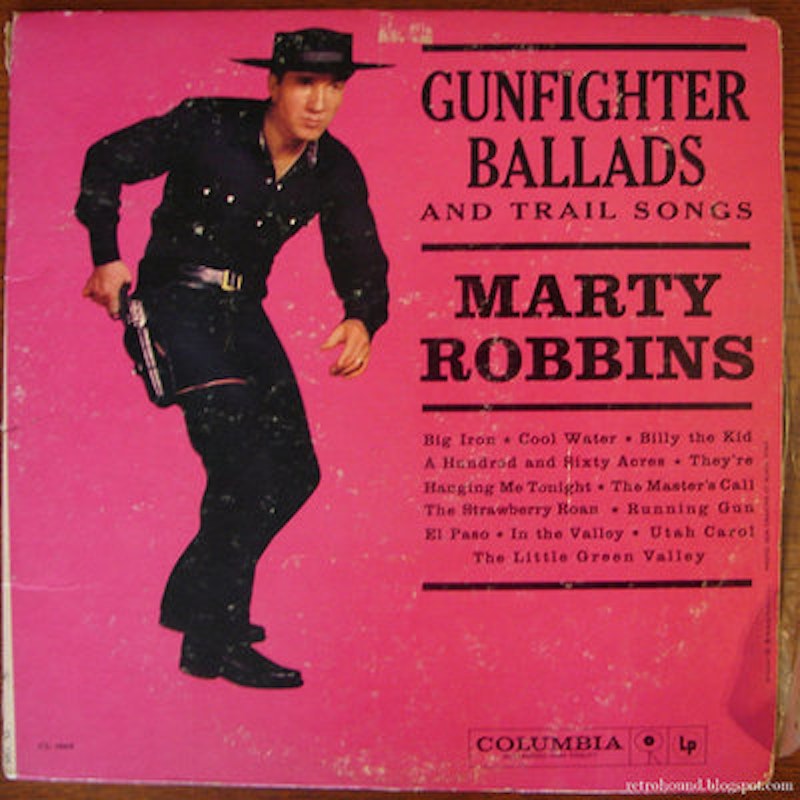 Or so the argument often goes. But listen to Marty Robbins' 1959 classic album Gunfighter Ballads and Trail Songs and you begin to wonder. Robbins isn't much listened to or discussed these days—his smooth, scrubbed vocals and his pre-rock-pop backing make him sound terminally square even by the standards of someone like George Strait. Gunfighter Ballads and Trail Songs was a nostalgia exercise when it was released, and at this point its hoary morality tales, paeans to the plains, and cowboy clichés come across, on first listen, as cheerful self-parody, a be-suited 1950s ad executive's TV version of the "Wild" West.

Spend a little more time with the album, though, and you start to notice that the placid, fusty surface barely conceals a disturbing worldview. Song after song deals with murder and/or violent death. The album's hit "El Paso" is a lengthy, grinding, explicit tale of jealousy, murder, revenge and bloodshed set to a lilting Spanish guitar.

“Something is dreadfully wrong for I feel/A deep burning pain in my side/Though I am trying to stay in the saddle/I'm getting weary, unable to ride…

“Though I am weary, I can't stop to rest/I see the white puff of smoke from the rifle/I feel the bullet go deep in my chest.”

Songs like "Big Iron" and "Running Gun" and the traditional "Billy the Kid" spin out similar stories of detailed manly gun battles, describing the impact of bullets with a sensuous enthusiasm that would make NWA head-nod in approval. As a change-up, Robbins' covers Bob Nolan's classic "Cool Water," about dying of thirst in the desert while the open, yearning harmony back-up singers taunt you with visions of oases. And then there's "Utah Carol," a jaunty, sexless account of how Utah Carol saved "Lenore, his little friend" from a cattle stampede—the moral of which appears to be, "don't let the women on the trail."

The best, and not coincidentally, most vicious song on the album, is "They're Hanging Me Tonight." Over a dragging beat, a guitar strums mournfully while Robbins tenor soars and quavers as he remembers Flo, the girl who rejected him.

"I think about the thing I've done/I know it wasn't right./They'll bury Flo tomorrow/But they're hanging me tonight."

The slow tempo and Robbins' measured phrases, along with the shifts in scene from jail-cell vigil to recollection of the crime, all give the song a dreamlike air, as regret blurs into wistfulness. Does he regret killing her? Does he regret being caught? Or is there a kind of lurid, aesthetic reveling in his sin and his torment, and in the way the violence in the past and the violence in the future resolve into a present, still, lyrical catharsis.

Robbins' sanctimony, then, is not a hypocritical refutation of the album's violence, but rather part and parcel of its enjoyment. In "The Master's Call," a youthful cattle rustler sententiously declares that "this kind of sinful living leads only to a fall," and then recounts how he is converted during a thunderstorm and stampede— a Saul-on-the-road-to-Laredo moment, with God shooting a lightning bolt to "fell the leading steer." It's one of the most thoroughly ridiculous songs I've ever heard, only accentuated by the cowboy "oooooo's" in the background of Robbins’ tale of miraculous repentance by cow-corpse. It serves as the flip side of the rest of bulk of the album's murderous obsessions; a repentance which excuses and accents the joy of the transgression.

Gunfighter Ballads and Trail Songs is a reminder that violence has long been a beloved staple of popular culture… and it also, perhaps, shows why. The album's charm comes largely from the contrast between Robbins' blandly inoffensive sound and the insistently brutal lyrics. In part, that contrast is funny—as demonstrated by the album's cover, which features Robbins as the world's best-scrubbed cowboy against a ludicrously dramatic red background. But in part it's effectively, even hauntingly creepy. As with the polite antagonists in Funny Games, there's something especially disturbing about nice-guy sadism. But nice-guy, mean-guy, square-guy or cool-guy, there's little doubt that violence provides an emotional oomph that entertainment, no matter how corny, has long found hard to resist.