Never All Out of Love 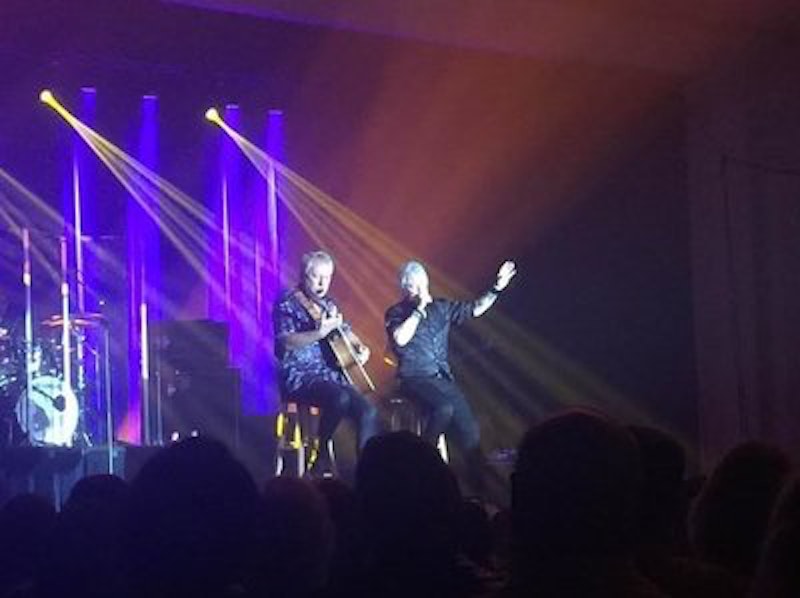 If you don’t like the band Air Supply, this article isn’t for you. I’m on record as a huge fan, and even wrote a sonnet for them. Their music is the soundtrack not only to my childhood (in vinyl), but to my adulthood (Pandora station), so when I heard they were going to be in concert at a nearby venue (Dover Downs casino), I went to see them.

Quick history lesson: Graham Russell and lead singer Russell Hitchcock met in May 1975, on the first day of rehearsals for Jesus Christ Superstar. They played pizza parlors and nightclubs after performances, started opening for Rod Stewart in their native Australia, and lucked out when Clive Davis discovered them and they landed the hit single “Lost in Love” in 1980. I was 11 at an apartment complex swimming pool when it came on the radio, and have loved their music ever since.

Seven top-five singles later, Air Supply at that time had equaled The Beatles' run of consecutive top five singles. The albums Lost in Love, The One That You Love, Now & Forever, and The Greatest Hits sold in excess of 20 million copies.

You have to love a concert at a casino, where a waitress takes your drink order. As she walked away she said “good luck” as though my husband and I were sitting at a craps table and then corrected herself, “Sorry, I’m used to working on the floor.” The women next to us talked about the concerts they’d been to in the past, pulling out a photo of themselves with Russell and affixing it into the keepsake program book with plans to thank the band members when they met them after the show for including it. They were my age and we spent a lot of time reminiscing about favorite songs, talking about how these guys are our parents’ ages and still sound unbelievable, how cool it was going to be to meet them.

Russell and Graham are very accessible. If you want to meet them, you can buy “Lost in Love VIP Experience Upgrade” tickets that get you first 12 row seating and a bunch of other perks, or you can buy their retrospective book that gets you a meet and greet after the show. Even during the concert when they sing “The One That You Love,” they come down from the stage and walk around and do selfies with everyone, which was popular with the crowd. The audience had been told not to use photography or video, but they pretty much ignored this and social media covered the entire event. One annoying guy in front of me stayed on FaceTime for the whole concert so I had to see the other person on his screen from start to finish.

The energy of Russell and Graham is electric. For guys in their late-60s, they have a grueling concert tour schedule and show no signs of looking or sounding tired. From the opening strains of the first recognizable tune ("Sweet Dreams"), it’s clear everyone in the crowd knows all the words, and singing along is always encouraged. Russell came down from the stage at one point to thank a veteran for his service, saying it’s one reason they love coming out to do live shows. When he took a five-minute break, Graham read a poem from his book of poetry and sang a few acoustic songs with their talented guitarist Aaron Mclain. They played their new song “I Adore You” which I immediately loved.

By the end of the concert, the crowd is on their feet and when Air Supply sang “Making Love Out of Nothing at All” (my favorite) I was in full-on shrieking 60s Beatles-era fan-girl mode. They closed the show with a resounding “All Out of Love” (here’s a video of a recent live performance of this) as the crowd swarmed close to the stage to show their love for a band who has given it out in every song for over 40 years and shows no signs of slowing down.