The oft-confrontational band throw us all a bone on Plays the Music of Twin Peaks. 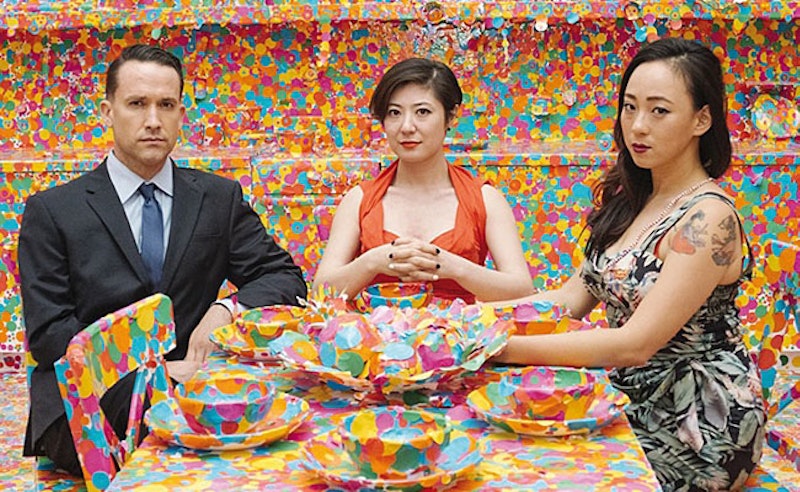 During a sweltering week like this, Xiu Xiu is not the best band to put on. At the start of the summer, I started buying albums by The Cure—I didn’t know them beyond the hits (yet somehow I never heard “Pictures of You,” an incredible song), and I needed a new artist to pour and obsess over. Once it hit 100+ degrees here in Baltimore, Seventeen Seconds and Disintegration went right back on the shelf until their time comes in the fall. I had to cut off an Elliott Smith kick I was on recently because he was really bringing me down. I’m pretty happy right now, and Smith’s music has provided lots of solace and comfort in the past when I wasn’t doing so good, so I dove headfirst back into his discography and discovered songs I’d previously ignored—“King’s Crossing,” “Southern Belle,” “Easy Way Out,” “I’m Doing Okay, Pretty Good”—and tried in vain to nail the guitar intro to “Angeles,” a two-year struggle now. But if you’re not in need of some serious emotional rescue, Smith’s music might just drag you down. There’s no catharsis in it, unlike the so-called sad sack music of The Cure, Nirvana, Cat Power, The Smashing Pumpkins—or Xiu Xiu, which is a bit surprising for a group based on the premise “that sometimes life turns out with a worst possible case scenario.”

After a limited release on Record Store Day a few months ago, their latest album, Plays the Music of Twin Peaks, is out now on Polyvinyl. To release a double LP of reinterpretations of Angelo Badalamenti’s iconic Twin Peaks score is a perfect move for Xiu Xiu right now: they’ve been working hard for a decade and a half, putting out a new record every year or two, and incrementally adding to and massaging the utterly unique sound and perspective that their work has had since their debut in 2002. Their third album, 2004’s Fabulous Muscles, threw them into Pitchfork’s sights, and they experienced the same brief hot buzz that trailed flameouts like Clap Your Hands Say Yeah (they even performed “I Luv the Valley OH!” on Jools Holland’s show). But Jamie Stewart and co. have kept plugging along, and while they are a recognizable name in indie rock and experimental circles, their bubble has remained frustratingly small. But as you might expect, their fans are devotional—Xiu Xiu makes music that saves people from self-harm and suicide. And their legacy will be established and recognized in time, because they have a mark that all great bands have: everyone has a different favorite record. And I think Plays the Music of Twin Peaks is arguably the most broadly accessible album they’ve ever made, if only for the fact that it’s largely instrumental, with just a handful of vocals by Jamie Stewart and Angela Seo. Stewart’s warbling baritone and aggressively bleak lyrics make lots of people uncomfortable—and with millennial interest in Twin Peaks rising in advance of its new season, this is the perfect time in Xiu Xiu’s career to throw the world a bone and try their best to hook more people into their world.

There’s no cynical opportunism or trend-consciousness here: it’s obvious that Stewart and longtime bandmate Angela Seo would be big enough fans of Lynch and Twin Peaks to create a 70-minute tribute to its music. But again, these are radically altered arrangements: gone are the brushed snares and vaguely ominous lounge music of Badalamenti’s score, and the soundtrack’s most famous songs (“Falling” and “Laura Palmer’s Theme”) are transformed almost beyond recognition. Badalamenti’s disconcerting but smooth drones are redressed in coarser clothes, but the spirit of the original score is present throughout. Xiu Xiu's performance and production signatures—like processed percussion, sinister bells and xylophones, and engulfing waves of sound—are all present, and on the songs where Stewart does sing, he’s unintelligible and mixed out into the distance. There aren’t any lines like “I'm going to spank your ass so hard you'll hate the wig master” or “I LOVE ABORTION. YOU ARE TOO GOOD FOR THIS LIFE” that pop out and repulse most people. If there was ever a moment to get the uninitiated and the obstinate on board, it’s this Twin Peaks record. “Love Theme Farewell,” the second to last track, retains Badalamenti’s melodic motifs, but the sound of the song is signature Xiu Xiu: a sad piano figure comes in and out of gloriously chaotic drones and feedback, meticulously crafted sound art that you rarely find at a warehouse noise show.

2014’s Angel Guts: Red Classroom was pure, immaculate noise: chaotic, dissonant, and abrasive, but still carefully sculpted and considered. It received frustratingly little attention or acclaim, but without context or a compelling narrative, a workingman’s band like Xiu Xiu won’t be fully appreciated until they’re gone. The same goes for Deerhoof, who put out one of the strongest albums of their career in June and got little more than lukewarm “hang in there!” notices in the press. What are they supposed to do with two remarkably consistent bands that operate in their own sonic universe? As a fan, all you can do is support them and do your best to turn other people onto their music. With Xiu Xiu, you honestly might lose friends—try to be a good judge of who can take it and who wants it but doesn’t know it yet. I’m sure you know plenty of people who love Twin Peaks but would never listen to a song called “Support Our Troops OH!” that ends with the line “Why should I care if you get killed?” Bring them to a Xiu Xiu Twin Peaks show if you can, and maybe motion gently toward something like The Air Force, or A Promise. You never know who needs that sort of comfort the most.