Miles Above the Checkout Counter

Glassine’s No Stairway is a gorgeous manipulation of field recordings from Guitar Center. 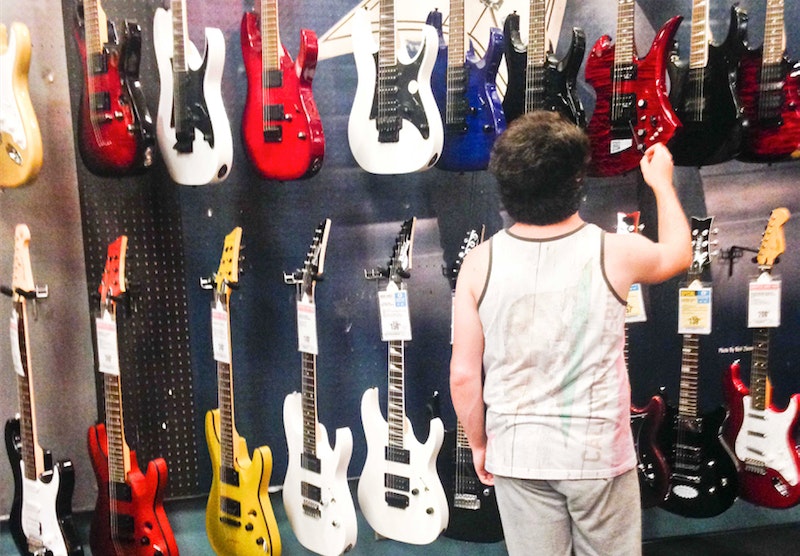 For whatever reason, there’s been a glut of albums lately comprised of field recordings made in Guitar Center stores. It was a “twin films” situation, like when Deep Impact and Armageddon, and Antz and A Bug’s Life came out practically simultaneously in the late 1990s. But in major motion pictures, ideas and scripts circulate years before any of us see them. Concept albums about salvaging the cacophony of your average Guitar Center might’ve been inevitable, but so close to one another? No fuss—the only one that matters is Glassine’s No Stairway, a record that isn’t gimmicky or justified by its concept alone. The fact that every sound on here came from within and without Guitar Center shoppers is a nice note for the blurb on the shrink-wrap sticker, but it’s not an untreated or abstract collage of horrible noise. No Stairway is made of micro-edits and half-second loops, and it’s very pretty and pretty cracked. The balance between tinker-toy primary color melody and dissonant distance and space reminds me mostly of Boards of Canada, pocket symphonies being pumped out of a PA speaker in the food court of an abandoned Rotunda at dusk.

Sped up and slowed down voices drift in and out, asking questions we can’t understand, inevitably lost in washes of orange chords and distant, faded drum breaks. These are songs: this isn’t a document of Hell and “Smoke on the Water.” Glassine—others call him Danny Greenwald—made the “everyday people” sound like William Basinski. No Stairway is a more dynamic and less depressing version of Basinski’s Disintegration Loops: instead of documenting tape loops as they turn to dust set to camcorder footage of smoke pluming endlessly from Lower Manhattan during the last hour of daylight on September 11, 2001, Greenwald has made the most non-musical and chaotic chain on Earth into a bushel of delights, taking a chord here, a drum machine pattern there, snatches of conversation, and mangled and distorted sounds sorted into something else. It’s gauzy, crystalline night music, a more upbeat version of the same sleep state that Liz Harris, Stars of the Lid, Basinski, and occasionally Aphex Twin capture. No Stairway is edited beyond recognition, and knowing that all Greenwald had to work with was material he recorded in a strip mall makes the record even more remarkable.

Sleep! No musician should take it as an insult when someone tells them that’s what they like to do best to their work. In my experience, not much else works besides the people I’ve already mentioned (and recordings of airplane hangars). No Stairway is gorgeous and glossy, something to get lost in, a world away from Wayne and the Saturday Shredders and window shoppers and 13-year-olds with their moms buying their starter pack and arguing about Epiphone and Squier.