Garfunkel’s Not Fakin’ It

No sound of silence from Art Garfunkel on former partner Paul Simon. 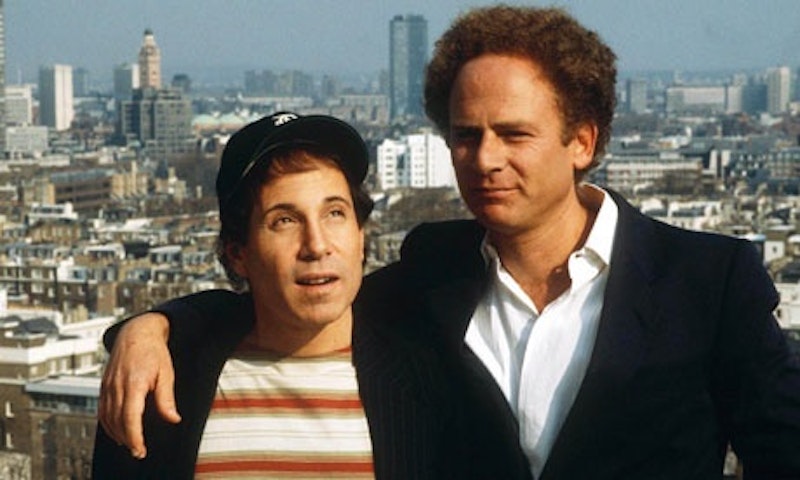 It’s fair to say Paul Simon went onto considerably more fame and career success than Art Garfunkel after the musical duo split in 1970. And Artie, as Paul sometimes calls him playfully, still hasn’t gotten over it.

Garfunkel, of angelic voice renown on “Bridge Over Troubled Waters” and other Simon and Garfunkel hits, slams his one-time best friend, in an interview with the British Telegraph newspaper. Garfunkel calls Simon a “jerk” for splitting at the height of their success, 45 years ago. “How can you walk away from this lucky place on top of the world, Paul?” Garfunkel asked rhetorically. “What’s going on with you, you idiot? How could you let that go, jerk?”

He added: “I want to open up about this. I don’t want to say any anti-Paul Simon things, but it seems very perverse to not enjoy the glory. Crazy. What I would have done is take a rest from Paul, because he was getting on my nerves.”

It’s not difficult to see why he would feel that way about his fellow 73-year-old. Simon has earned 12 Grammys for his solo and collaborative work, including a Lifetime Achievement Award. In 2001, he was inducted into the Rock and Roll Hall of Fame. Garfunkel has had middling success as an actor and solo artist, but nothing on the scale of his former partner.

Still, Art’s barbed comments are a sad spectacle for even casual Simon and Garfunkel fans. The Queens kids-cum-superstars have, admittedly, publicly feuded over the years. The Bridge track “The Only Living Boy in New York” is a thinly-veiled Simon criticism, after aspiring actor Garfunkel went to Mexico to film Catch-22. Simon felt left behind in New York, forced to work on upcoming album material alone. The song lyric refers to Garfunkel in the song as “Tom,” alluding to their early years together as Tom and Jerry. It encourages him to “let your honesty shine… like it shines on me.”

Then, after Simon and Garfunkel’s 1981 reunion concert in Central Park, reports emerged that the pair had squabbled over how much of Paul Simon’s solo material to use, among other points of contention. But bad blood hasn’t been this open in recent years. In fact, the pair reformed for a number of tours, including in 2003, 2004, 2007 and 2009. Even now, Garfunkel insists another reunion isn’t impossible. “Will I do another tour with Paul? Well, that’s quite doable,” he told the Telegraph. “When we get together, with his guitar, it’s a delight to both of our ears. A little bubble comes over us and it seems effortless. We blend. So, as far as this half is concerned, I would say, ‘Why not, while we're still alive?’”