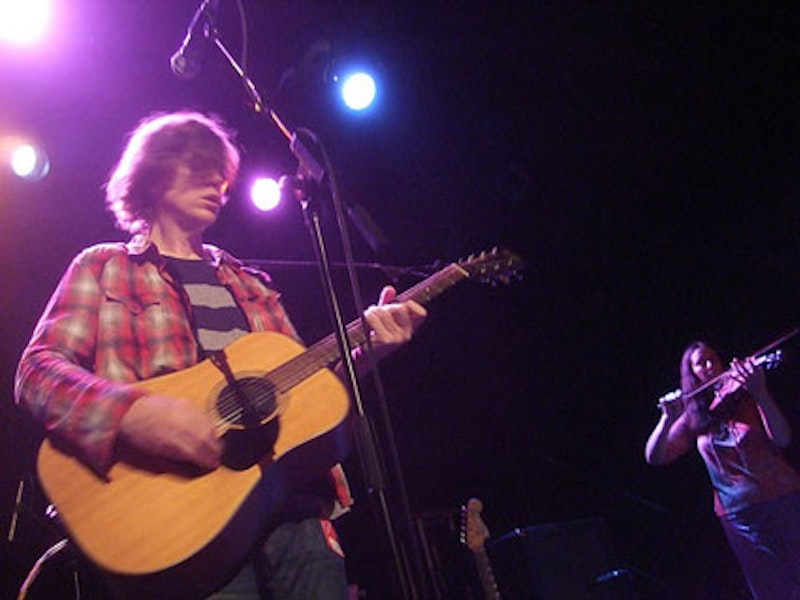 Thurston Moore is 52 years old, which could be the perfect age for a rock veteran to make a mellow acoustic solo album, like his recently released Demolished Thoughts. But it’s a little surprising coming from the co-founder of Sonic Youth, the band that's been stretching the electric guitar to its breaking point, sometimes literally, for the past 30 years. Moore and bandmate Lee Ranaldo have experimented restlessly with distortion, dissonance, feedback, alternate tunings, effects pedals, and even sticking drumsticks between strings to make their Fender Jazzmasters sound more electric and electrifying than anyone else's in rock music. Any guitar hero can play an acoustic just as well as an electric in theory, but few have more to lose in terms of tools and tricks than Moore. Or at least, that's what he believed for a long time.

Throughout the 1980s, as Sonic Youth blazed a trail from New York's downtown No Wave scene to college rock royalty, gradually fusing their penchant for amp noise with melody and songcraft, acoustic guitars rarely entered their vocabulary. Surprisingly, it's on one of their loudest and fastest early albums, 1987's Sister, that acoustic textures first cropped up, albeit buried deep in the mix of just a couple songs, "Stereo Sanctity" and "Beauty Lies In The Eye." A year earlier, the band scored a little-seen road movie called Made In USA, and when the soundtrack was finally released as a Sonic Youth album in 1995, it featured several brief passages of acoustic strumming. It’s likely, however, that those parts were played by Ranaldo, whose folk and singer-songwriter influences often contrasted with Moore's love of punk and metal.

In 1991, Neil Young invited Sonic Youth to perform at his annual Bridge School Benefit, a charity concert in which performers generally play acoustic sets. And their set was quite simply a fiasco, as the band awkwardly attempted to rework material from 1990's Goo on acoustic guitars. After just four songs Moore's wife, bassist Kim Gordon, smashed an instrument in frustration, and the band left the stage to boos from the audience. Given that experience, it's not surprising that they've never attempted an acoustic set in the 20 years since. MTV's Unplugged series was all the rage in the 90s, and even some of Sonic Youth's alt-rock disciples like Nirvana made memorable appearances on the show, but for them it seemed that was one experiment that simply wasn't meant to be.

In later years, as the band's commercial fortunes dimmed and their music began to mellow, or at least drift from faster, louder material, the amps stayed on, and they continued to hold strong to their traditional configuration of two guitars, bass and drums, with a few exceptions. After the band finished recording 1994's Experimental Jet Set, Trash And No Star, they were asked to record some extra songs for single b-sides and compilations. With only some acoustic guitars in the studio, they recorded three songs, one of which, a short Moore solo performance titled "Winner's Blues," ended up on the album as the opening track.

For years, Moore recorded countless albums outside of the group, but most were instrumental explorations of avant garde noise and jazz. His first album of fully composed songs with vocals, 1995's Psychic Hearts, featured electric guitars and a backing band that included Sonic Youth drummer Steve Shelley. And it ultimately felt sort of like a placeholder Sonic Youth album, while the band was on temporary hiatus following the birth of his daughter with Gordon.

In the late 90s, Moore began performing solo with an acoustic guitar regularly for the first time, playing a set of vocal and instrumental compositions, including a lengthy piece called "Dream Investigations." That material never surfaced on a studio album, but in 2000, a live album called Hurricane Floyd, recorded at an improv concert during the titular 1999 storm, featured a song from Moore's solo acoustic set called "Altar Boy, Church Basement." In the years that followed, riffs and melodic ideas from that piece seemed to surface on several songs from the next few Sonic Youth albums, played on an electric guitar, of course: "Rain On Tin" from 2002's Murray Street, "New Hampshire" from 2004's Sonic Nurse, and "Turquoise Boy" from 2006's Rather Ripped. The band's creative resurgence on these albums was at least in part due to Moore beginning his songwriting process at home with an acoustic guitar.

Rather Ripped also featured some acoustic guitar on its closing track "Or," as did the closing track from the band's next album, "Massage The History" from 2009's The Eternal. For the first time, Moore was bringing out an acoustic guitar onstage with Sonic Youth for every night of a tour, even if it was for just one song. Along the way, he recorded his second song-based solo album, 2007's Trees Outside The Academy, which prominently featured acoustic guitar, but was ultimately so uptempo and rock-oriented that it didn't even seem strange for the album's cover art to feature a picture of Moore playing an electric. And over the years, Moore and Gordon have sporadically performed as a duo under the name Mirror/Dash, with Moore sometimes playing acoustically during their sets.

In 2009, in one of Sonic Youth's odd occasional forays into pop culture, the band appeared on an episode of the prime time soap opera Gossip Girl. They played an acoustic arrangement of "Starpower," an oldie dating back to 1986's EVOL. And the result was just gorgeous, a perfect encapsulation of how the band's strongest melodies don’t require amps and feedback to sound good. And most significantly, it was the first time the band attempted to retrofit one of their songs with an acoustic arrangement since the disastrous Bridge School Benefit set.

In the first few months of 2011, Moore has cemented his affinity for the acoustic guitar on two albums. After the 2009 death of guitarist Jack Rose, Moore recorded a tribute for the Vin Du Select Qualitite series of solo acoustic albums, and the resulting instrumental collection, 12 String Meditations For Jack Rose, was released in February. And then in May came Demolished Thoughts, produced by Beck, one of Sonic Youth's few acolytes who’s always been more comfortable with an acoustic guitar than an electric. Throughout the album, Moore's acoustic is often the primary or only instrumental texture, with touches of harp and violin, and his voice is hushed and tender. It's still hard to imagine an entire Sonic Youth album or concert without amps and distortion pedals, but it finally feels like the band wouldn't be lost without them.