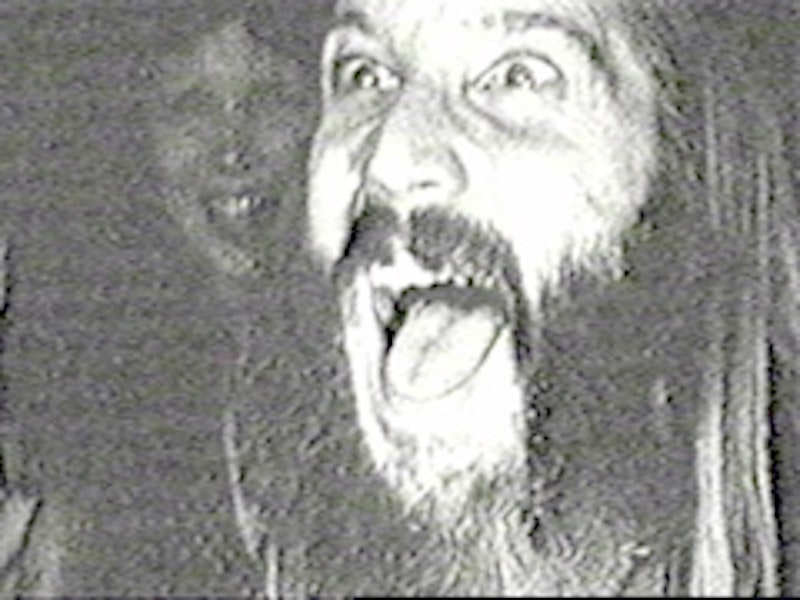 Splice Today: At what point did music become a more serious pursuit for you?

Emmy Collins: I've been “playing” guitar since I was 17. I never tuned, and would play with knives, forks, whizzers and other objects until all the strings were broken. Creation and originality were all that mattered to me. I started to record on a more regular basis with a one-track General Electric tape deck that I originally bought to tape my voice for an Intro to broadcasting class at Grossmont Junior College in San Diego. I began to take the tape deck in my backpack wherever I went and would record random things like conversations, mechanical noises, and my own ramblings.

ST: What's the weirdest or most unexpected exchange or sound you captured via your backpack tape deck sound grabs? Did you hold onto these, and do they surface in your present-day recordings?

EC: I captured, also on Super 8mm film, a great street preacher, crazed, spitting, fire and brimstone stuff in New York City in 1994, used some of the footage in my compilation film: Rays of Ineptitude. Also caught on tape: interesting conversations/music with some pretty wild dudes down in woodsy Alabama who I stayed with while working on a film in Huntsville, AL. They said things like “We're down here in the holler with Emmy Collins” in a thick Southern accent and would proceed to play some very touching original songs about hardships and life in the rural South. One of their peripheral buddies pulled out a very large knife one afternoon and explained to me in great detail how he would be able to kill people real easy with it; I lit out that evening to find another place to crash.

I have quite a bit of the stuff I recorded over the years and am still recording new stuff. I have used some of these “field” recording in my releases, oft buried and not readily decipherable. I did sell a box of tapes at a swap meet in Albuquerque, NM in 1993 and lost some of those precious recordings, but at that same swap meet I bought what have turned out to be ultra-rare Gretsch guitar pedals for five bucks each. So: a loss begets a gain.

ST: How did you get into acting?

EC: I got into acting via a “Critical Analysis of Film” class at Mesa College in San Diego, CA in 1986. The teacher—a wacky guy in shorts and flip-flops whose obsessions with dark rooms was written all over his face—would announce a film with no real preface; he would just say “we'll talk about it after it's over” and let the movie roll. I saw many great films with excellent performances by the likes of: Toshiro Mifune, Orson Welles, Peter Lorre and Eddie Constantine in the blackened auditorium and decided to become a filmmaker, so I dropped out of college thrice and for all and bought a $5 Super 8mm film camera. Frugality Films was born. A college class I actually liked made me drop out of college!

I saw the flick Blue Velvet during that time, and Dennis Hopper's portrayal of Frank Booth had a pretty severe impact on me though I still just wanted to make films, not be in them. I started up a show on San Diego public access television with co-producer/writer Bill Waters shortly thereafter. We would screen local short films and I would interview the filmmakers afterwards. Waters and I worked at American Film Technologies at the time and we tapped a few of our co-workers for material. I'm very color-blind, and here I was colorizing classic and not-so-classic films.

We would always be short of material and I began performing goofy skits, songs and jokes to fill our hour time slot. Those performances were my first filmed acting appearances.

After more public access debacles in Albuquerque, New Mexico and Atlanta. I sent a photo to the casting director of John Frankenheimer's television epic: Andersonville, filmed in Senoia, Georgia. I ended up working 60 days on the production as a northern Civil War prisoner with scabies, open wounds on my face and dying of malnutrition. I really got into the role and even camped on the set so I didn't have to drive the two and a half hours one way to Gainesville, GA each shooting day.

Me and a pal—Neill Calabro, whom I met on the set—decided after the final day of shooting to really give the acting thing a try; we ended up travelling for a year all over the U.S. Eastern seaboard, often just showing up on film and TV show sets, asking for work and we got work about 85 percent of the time. Calabro wrote a book chronicling our exploits on the road entitled Anyone Can Be In Movies.

We slept in our cars—or Toyota van in my case—with our pagers under our pillows. One of our many mottos was “If we work, we eat” as most film/TV sets provide two meals per day and a craft service table for snacking. During our lean periods, we ate at homeless shelters and Neill would occasionally “dumpster dive” for donuts.

ST: Of all of your various musical releases, the Acidic Jews album—Clean Rigs—is my hands-down, uncontested favorite. It somehow manages to synthesize a lot of your aesthetics—guitar noise, distressed samples, loops—in a way that’s more digestible and maybe narratively direct than, say, a Brutal Poodle or Nozzle album. That’s not to say that the other albums aren’t guided by an overall principal or methodology, but Rigs eases the listener into its particular brand of madness and offers signposts or islands in some of those moments where the blare cuts out and you’re addressing the audience, singing an old tune or laying a vocal loop on us, emphasizing an idea. Can you tell me a bit about the genesis of the Acidic Jews project and the recording/compilation of Rigs?

EC: Clean Rigs was influenced by the Citizen's Band Radio/trucker compilation records that were everywhere during the 1970s CB Radio craze. Song snippets about pinball, trucker speed, choppers, hippies and “pennies in the road” are layered throughout.
The title “Clean Rigs” is a double-entendre as a roommate of mine in San Diego, California circa 1990, when asked about how it went with a lovely female that he had just “spent some time with,” would often reply: “she had a clean rig.” He was the sort who would see a woman at a supermarket at two p.m. and by eight that night, us roommates would be hearing the sounds of coitus emanating from his bedroom—which I asked him to record once but due to “equipment failure” was unsuccessful.

I'm a staunch obscurant, and my recording process is a bit mystical even to myself. Rigs was my most rapidly composed release other than the live unedited stuff, such as, VOG. I hashed it all out during one long recording session in one day at Naut Flats in Landers, California and layered in the final track order to tape the next day.

A few trade secrets: no loopers were employed (and I still don't have one); a tape deck with almost dead batteries was used for those raw myxoidal slow layers that crop up throughout; the Emco Fuck-Tar made an appearance or two.

Our dogs—the Miracle and Moxie the Space Dog—are the only guest performers. The slippers I was wearing while taping provided some nice scraping sound shards. I always pay attention to my footwear while recording as I often have microphones stationed all over the place, including on the floor.

ST: Did you ever receive formal guitar lessons? Have you ever considered teaching guitar? Maybe an advanced course?

EC: No formal guitar lessons. I have two very close childhood friends who are classically guitar-trained and have shown me bits over the years that I sometimes use.

My first instrument was the clarinet that I took up in the second grade. I wanted to play sax, but the teacher insisted I begin with the licorice stick. This teacher was a real hard-ass archetype—he would scream “cadence” at the top of his lungs whenever I was out of time; my clarinet career didn't last very long but I came to really love the sound of the instrument and I listen fairly regularly to people like Woody Herman, Artie Shaw, Eric Dolphy, Pete Fountain and Benny Goodman.

Shortly thereafter, my oldest brother Randy taught me some basic drums on a practice drum-pad. I wasn't very driven and he wasn't very patient so that fizzled out quickly. I took a basic synthesis class at Grossmont College that convened at a local music store where I learned ADSR—attack, decay, sustain, release—and not much else.

Never considered teaching guitar as I feel like a moronic gitfiddler. Perhaps an advanced sound manipulation course at a local junior college or an interactive on-line class would be the ticket.