Embracing the mainstream individuality of Born This Way and the inner blank degradation of Gallhammer's The End. 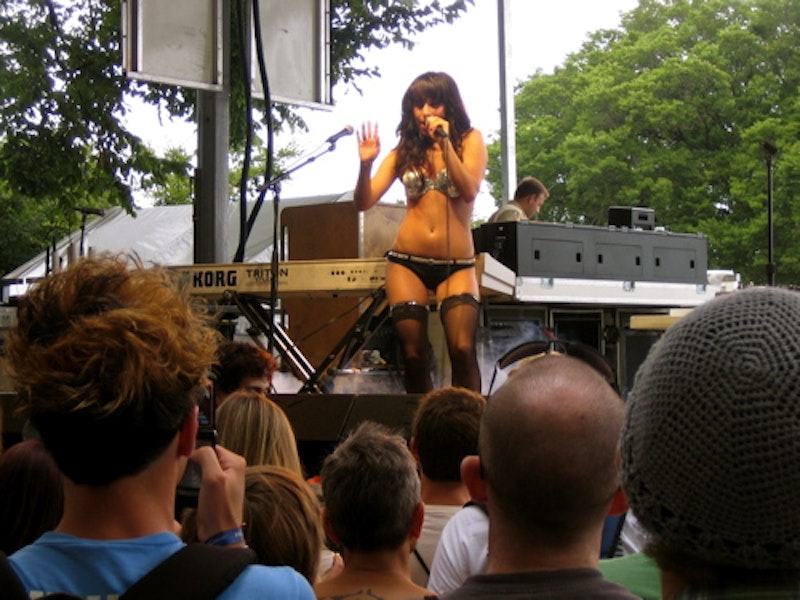 Queer sells. This is hardly a surprise; gender-bending pop stars have been doing titanic box-office at least since Elvis and Little Richard wore mascara. David Bowie, Michael Jackson, Madonna—having one foot or more in gay culture is clearly no bar to connecting with a massive mainstream audience. Quite the reverse.

Lady Gaga is the most recent bi diva to dress like a man cross-dressing as a woman and shock everyone to the titillating tune of cash registers ringing. “Don’t be a drag, just be a queen,” is a fabulous self-empowerment mantra by which to conquer the great straight unwashed masses.

I have nothing in particular against Lady Gaga. Wearing a meat dress is pretty awesome performance art, and “Bad Romance” is a killer single. She was always a better provocateur than musician, though, and Born This Way makes that case more definitively than is altogether comfortable. The best songs are pro-forma retro-disco, which is fine. The worst efforts though, like “You And I” wander dangerously close to the bland feel-good slog of country radio, with queer self-empowerment fitting neatly into the subcultural southern self-empowerment of working-class regional whites.

That’s kind of a nice idea in some ways. Why shouldn’t marginalized gays and marginalized southerners make a common cause rather than going another round of hate and loathing? But the track is so drearily uninspired that it’s hard to see it as a triumph. This isn’t “black, white, Puerto Rican, everybody freakin,” to quote a more audacious utopian vision. Instead, it’s a Faustian bargain of blah. We will accept all of you, yes every one, if you agree to become every bit as boring as us.

For another, less familiar, and perhaps more inspiring take on pop culture queerness, you might turn to Japanese female black/doom metal formerly-trio-now-duo Gallhammer. Their third album, The End was released at the end of April, and while it doesn’t quite rise to the twisted level of genius of 2007’s Ill Innocence, it’s still pretty great. And also pretty queer.

When I say The End is queer, I don’t mean that it’s anything like Lady Gaga. There is no disco influence here; nor any flamboyant shout-outs to the wonderfulness of drag queens or the beauty of being the beauty that you are. On the contrary, Gallhammer is brutal, straight (as it were) extreme metal, with no frilly nonsense (unless you count the corpse-paint, I guess) and all individuality brutally crushed and desecrated. In “Aberration,” one of the singers chirps like a helium-fueled psychotic while the other growls and roars like the monster in a horror film, the music trudging along in muddy blackness, a tide of razor-edged sludge come to bury them both. “Entropy G35” verges on Death metal, two minutes and 25 seconds with an actual hook struggling desperately to claw its way out of the maw. “Wander” goes back to what Gallhammer has always done best; slooooooowwwww, scraping, repetitive doom, with Risa Reaper hitting the drums hard enough to make Dale Crover take notice and the that-can’t-possibly-be-a-woman-can-it? vocals sounding like the singer is vomiting black bile continuously. There’s a particularly spectacular strangled shriek at about the 9:40 mark which stretches on and on and on impossibly, trailing off into the endless brutal trudge.

What’s gender-bendy here, then, isn’t flagrant appeals to gay culture; it’s the butchness of the project. Extreme metal is almost all made by men. Gallhammer doesn’t do extreme metal just as well as the guys; for all practical purposes, they become the guys. From the guttural vocals to the unrelenting music, they’re indistinguishable from bands that are not women. Which, in turn, points out how oddly external gender is to the whole extreme metal project. If you’re an anonymous moldering corpse in hell, how much does it really matter which bits you have anyway?

Lady Gaga is about embracing your inner fabulous queer individuality, which is a project the mainstream can thoroughly appreciate. Gallhammer, on the other hand, is about a queer embrace of your inner blank degradation, a stance that has less mass appeal. Having your fabulous friend tell you she’s wacky-and-okay, you’re wacky-and-okay is always going to be an easier sell than having some weirdo inform you that you’re a worm who will be torn to pieces in the stinking pit. Still, it’s useful to remember that a marginal perspective doesn’t always mean a sense of the sexy cool wonderfulness of everything. It can also mean a definitive understanding that we—the mainstream, the margins, everyone—are all shit, and deserve to die.