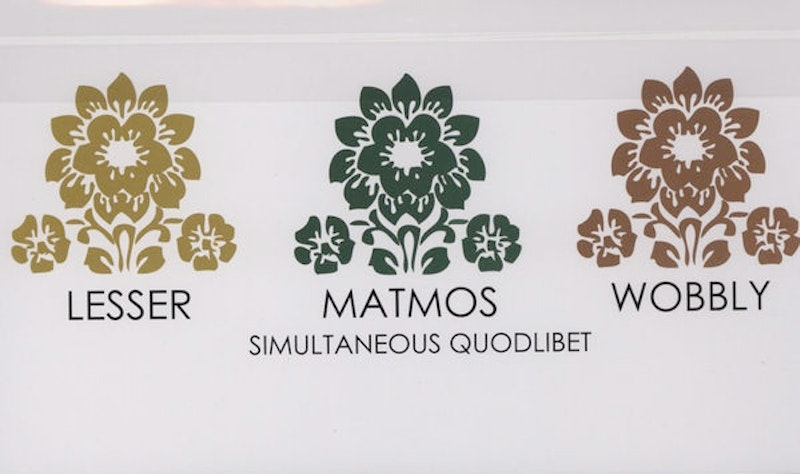 Attaching conditions to one’s enjoyment of a piece of art seems like a cop-out, doesn’t it? Like claiming that playing Smashing Pumpkins’ Adore is a wasted experience if it’s not two a.m., or that you’ll only listen to Green Day’s Insomniatic while coming down from a full-borne, raw-dandelion high. And yet here we are, Simultaneous Quodlibet (Important) and I, co-dependent: the album’s a twitchy, recycled-to-pulp mess, and I’m not quite conscious at mid-day. This means that right now, we’re perfect for one another. Fully awake, the record sounds like a half-baked hot mess; less so, it’s lopsided, flying-by-the-seat-of-their-pants pop wizardry, and its title—defined as the combination of two or more pre-existing melodies—seems more deserved.

The album is the product of a long-gestating collaboration between Baltimore-based electronic duo Matmos and a pair of Californian soundsmiths: Wobbly and J Lesser. Many back & forth cycles of sound creation, sound deconstruction, sound abstraction, and sound disintegration eventually birthed a recording that implies vacuum-drunk automation-apparatus bots cavorting around an unmanned, Delaware-sized space station, disassembling then reassembling components: Wall-E by way of an HTC Droid commercial.

(The sixth track is a case in point, and while its skittish, innumerable-unfathomable-metal-surfaces-lightly-struck-out-of-sequence feel gives way to bleeding cyborg drone scales and fake bag piping and anxious bleeping midway through, you may still want to itch yourself when it‘s over.)

Considering how often samples and performances are smashed to bits then glued to furtive, quirky melodies here, Quodlibet sometimes feels like Matmos’ exclusive show; that’s what those resourcefully unorthodox experimentalists do. But classics like Supreme Balloon and A Chance To Cut Is A Chance to Cure were never this loopy, this marginally coherent. Quodlibet’s contents—all untitled, frustratingly—are all over the map.

The opening cut offers a stop-on-a-dime tight, minimalist wow and flutter brief; maybe like Carl Stalling tinkering in a limitless ProTools library. Then: a swirling neon storm of loose change, aluminum cans, skittering beats, vocal samples squished and stretched into grotesque shapes, toy-keyboard chords boiled down to almost nothing and pop-pop-popping like windup toys; there’s the sense, somehow, that all is being chewed and digested. The third track is like mutant world music from another planet, conflating what sounds like strained, chopped distortion, blaxploitation funk guitars, fake DJ scratches, artificial birdsongs and whistling, bongos, and aqueous, burbling keyboards into an unclassifiable wondrous groove.

Check track five for meditative industrial rainforest fare that could‘ve fit nicely onto an episode of the original Star Trek series, track seven for a Germanic oi! anthem trapped within a keening butt-rawk junkyard, track nine for drifty space-station interlude Valhalla, track 10 for epic Planet Of The Apes jungle jazz-fusion under the influence, perhaps, of Oneida. Planet Of the Apes jungle jazz-fusion cut with bracing alarm clocks and this unsettling bit of dialogue: “Ray? Ray? Ray, can you come downstairs please? Ray, ARE YOU LISTENING TO ME?“