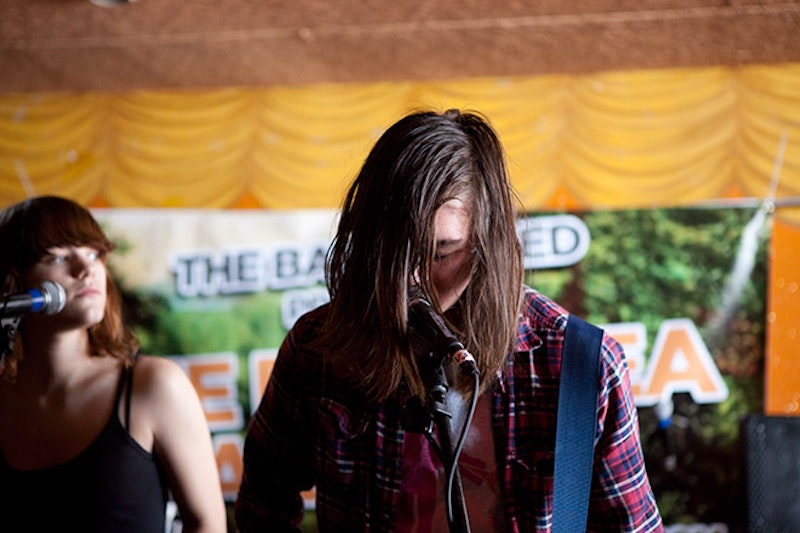 Young Prisms songs yawn klicks wide and fathoms deep, throbbing, fishtailing, and churning relentlessly; they attempt and fail to contain post-adolescent emotions. Globular, glowing vocals arise then descend like self-perpetuating phoenixes sucked into infernos, spit back out as ashes, then reconstituted. Snow-blizzard effects-pedal fugues; careening rhythm-section skids; gratuitous sprays of Kylon feedback that don’t quite sting the ear; a judicious cross-breeding of My Bloody Valentine’s raw, distorted bliss, Atlas Sound’s crucial, inflamed drones, and the caramelized pop slog of Hiding Place-era Sugar Plant. It’s not quite 2011 yet, but Friends For Now (Kanine), the debut from this San Francisco quintet—drummer/vocalist Jordan Silbert, guitarists/vocalists Matthew Allen and Jason Hendardy, bassist/vocalist Giovanni Betteo, and vocalist Stefanie Hodapp—already tops the short-list beach-listen for every stoner who’s ever wondered what it sounds like to have God suck one’s brains out of one’s skull with a silly-straw; the record isn’t a massive departure from the string of singles and eps the band has released up to this point, but it is an adroit demonstration of their ability to sustain and elongate its hybrid brand of heart-on-amorphous-sleeve ooze.

In a mid-November telephone interview, Betteo and Hendardy filled me in on song meanings, their day jobs, favorite tour-van albums, and the best drugs to get fucked up on prior to sampling their wares.

SPLICE TODAY: Where are you right now?

GIOVANNI BETTEO: We’re somewhere in the middle of eastern Washington or maybe Oregon, on the way to Boise.

ST: Can you tell me a little about the sleeve art for Friends For Now?

GB: The paints on the back and inside were done by Jay Howell, a San Francisco artist. Jason and Jordan are really into his work and wanted to incorporate that into the album.

ST: What’s the significance of Friends For Now, as an album title? I like to interpret it as you addressing your audience, like “right now you like us, but one day soon you’ll love us.”

GB: The title is a little more pessimistic than that. We’re all in our early 20s; I’m 22.The first track—that song specifically is more or less about the friends that you party with when you‘re young. There are a lot of temporary relationships you go through based on what you’re into—i.e. drugs. Brief relationships. I guess it’s more “friends for the time being,” temporary friends. This theme carries through parts of the album. It’s not so much personal experience, but experiences of friends or people we’re related to; the kind of evil side of life. When you’re young, you’re surrounded by countless people.

I was hanging out with my dad; he has fewer friends than he can count on one hand! Shit, man, I have like 50 friends I see every week; I guess they’re like “friends for now.”

ST: Do you guys have day jobs?

GB: Most of us do. I work at an Italian “upscale cheese and wine shop.” Matt works at Whole Foods. Beth and Jordan are unemployed. Jason works at a warehouse for women’s clothing. The three of us who have jobs hate our jobs, for whatever that’s worth! (laughs)

ST: What is your favorite My Bloody Valentine album, and why?

JASON HENDARDY: I think lately I’ve been listening to a lot of Ecstasy—that album is pretty awesome. But when we’re on the road, all the albums get played pretty often.

ST: What have you been listening to on the road on this tour?

GB: To be honest, we haven’t listened to much music yet—we’ve been watching TV. Like Boardwalk Empire; that’s pretty dope. A lot of No Joy: this new band form Canada, we’re listening to their record. Cocteau Twins. We’ve also been listening to Weekends’ record since I guess they finished it.

ST: Growing up, did any of you have tree houses? I’ve wondered this ever since coming across “Weekends and Treehouses” on the Young Prisms EP.

GB: No! I mean, there was one where we would hang out in high school, and get stoned and party; that’s kind of where the title came from. This kid we knew in high school; when Matt and I were in high school, we’d go to our friend Evan’s house and hang out near his tree house not doing anything, drinking, smoking, generally being redundant. Most titles relate to experience we had between high school and our aborted attempts to attend college.

ST: Are there any drugs that are particularly well-suited to a Young Prisms listening experience?

ST: One of the terms of Lil Wayne’s probation is that he can’t drink alcohol or do drugs for a while.

JH: Well, I’m sure someone will hand him a Styrofoam cup full of syrup soon enough! (laughs)

Kanine Records will release Friends For Now on January 18.