Ke$ha to old people: fuck off and die. 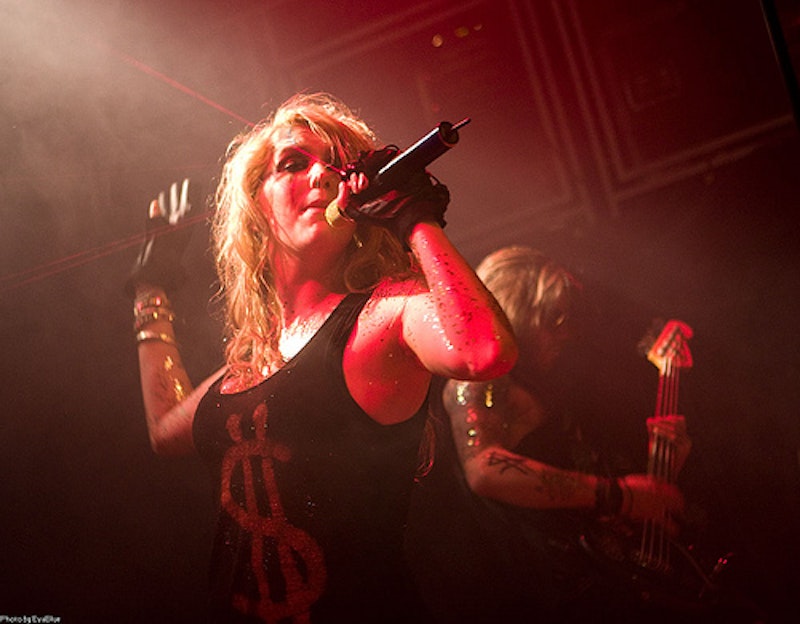 Fekadu can’t really be blamed, though; Ke$sha has an uncanny ability to unleash the inner Mr. Rooney in critics of every stripe. Whether it’s Ann Powers in a mostly positive review taking time out to huff that Ke$ha’s bratty frat-boy-but-oh-it’s-a-girl persona is “is neither new nor particularly useful,” or Monica Herrera calling “Dinosaur” “ageist” (because, like, it’s mean to make fun of old guys who hit on young girls, and pop music should never be mean), or everybody whining because she uses auto-tune and don’t these kids know they’re supposed to listen to singers who can really sing like Bob Dylan? Damn whippersnappers.

So, okay: Ke$sha is not interested in being new or useful; she’s extremely mean, she thinks old people should fuck off and die, and she can’t (or doesn’t bother to) sing especially well. You could sum that all up by saying she’s punk—or what punk likes to think it is. These days, of course, punk is one of the most critically fawned-upon genres available, with the proportional strength and subversive potential of a beer commercial.

I’d hesitate to call Ke$ha subversive either—what could that word mean exactly when you’re sitting on top of the charts, anyway?—but she sure has the castrating bitch pose down well enough to make Beyoncé blush and people like Fekadu check their junk. “Cannibal” is party girl as vagina dentata, with Ke$ha cheerfully declaring her love for her man by promising to butcher him. “Whenever you tell me I’m pretty / that’s when the hunger really hits me / your little heart goes pitter patter / I want your liver on a platter.” If possible, “Grow a Pear” is even harder on the male ego. “One day I asked if we could just talk / and that’s the reason why I’m walkin’ / If I am honest / I’m not hooked on your phonics / I just wanted one thing from you / and you got confused … I just can’t date a dude with a vag.” Ouch.

Ann Powers would no doubt point out that this kind of misogynist putdown is not helpful. And certainly it’s not raising the level of discourse. But, given the current rap landscape, there is definitely exhilaration to seeing a woman engage in such a thoroughly unedifying mixture of mean-spirited objectification and vindictive violence. Ke$ha has a softer side—“The Harold Song” is a convincing ballad of unrequited love in which the weird echoey auto-tune adds poignancy to her lament, “I would give it all / to not be sleeping alone.” But surely the main reason to listen to Ke$ha is because underneath the party-till-you-puke exterior is a feral wit that feasts on the carcasses of the old and the lame. Oh, yeah, and the hooks are so catchy you can hum them happily while you’re being mercilessly devoured.