On “The Heart, Pt. 2,” Compton MC Kendrick Lamar overheats and craps out while spitting the truth as he understands it. 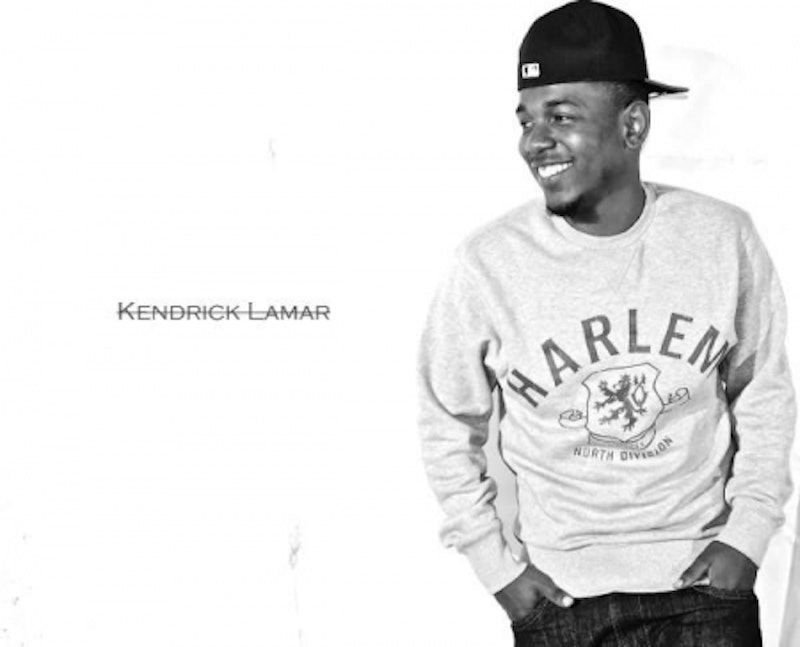 Rappers interact with their samples all the time. They question them, answer them, harmonize with them, allow them to begin and end statements. “The Heart, Pt. 2”—where Compton-based rapper Kendrick Lamar raps so intensely over The Roots’ jazzy “A Piece of Light” that he nearly loses consciousness in the recording both—is the first song where I’ve ever heard a rapper actually thank his sample. The sample in question appears at the beginning of the song is an extended snippet from an interview with Dash Snow, in which the late New York artist bemusedly rattles off a litany of things he doesn’t believe in (“laws, or the system, by any means“) before musing on the constant that’s kept him alive: “Music. I have to listen to music all day long; I’d say that keeps me going.” When he’s done, Lamar murmurs a grateful “thank you”—before going completely apeshit.

Of Lamar’s life and career, I know little. Here’s what I do know: a smattering of his tracks can be downloaded free on various blogs and sites; he’s got an EP out titled Overly Dedicated, which “The Heart, Pt. 2” appears on; supposedly he’s worked with or will soon work with hip-hop legend Dr. Dre, a fellow native of Compton. I also know that he’s capable of commercial garbage like “For The Homies." This information blackout is entirely intentional on my part, because I’m trying to come to grips with Lamar on the purest level. Next year, when he drops a longer, more significant release, I’ll be willing to loosen or remove the blinders, but right now this myopia enhances the mystery of Lamar and the esteem in which I hold “The Heart, Pt. 2.”

Either “The Heart, Pt. 2” is cynically calculated, or it is free of all calculation whatever, unbridled id. Lamar’s flow is less stolid, granite Dre or lazily melodious Snoop than it is Talib Kweli/Q-Tip/Mos Def twisty with a rasp, drenched with emotion and regret, not posi-rap or straight gangsta but living somewhere between those two poles—an intricate dervish flow full of rope-a-dope meters and scrumptious internal rhyme counterpoints. Lamar opens “Heart” by allowing us a window into his pre-performance thought-process—to freestyle? to write? and how to remain consistently clever—before going in hard and in the process going off: on his perceived shortcomings (“I ain‘t perfect / I ain‘t seen too many churches or know no testament verses”), on the industry, on the neighborhood where he grew up (“Let bygones be bygones, but where I‘m from / We buy guns and more guns, to give to the young“), on family (“My uncle doin‘ life in prison, he wasn‘t wrapped too tight, he told me rap about life, not rap niggas“), on rap rivalries (“We used to beefin‘ over turf / Fuck beefin‘ over a verse / Niggas dyin‘ / Fuck a double-entendre“). Then he starts losing the plot, drawing you into the world’s downward spiral as his breath-control falls away: “Just let me explain it / Why’d you pick up that stainless? / Cuz your pops wasn’t anxious to see you, and you hate it / So much you probably had your burner tucked at graduation.” How much is real, how much is invention, how much is embellishment? I don’t know, and it’s vicariously thrilling not to know, just yet.

When Lamar compares himself, in an unusual way, to Master Splinter, or expresses worries about escaping the cops and staying out of Central Booking, his hyperventilated panic feels genuine, but how much of that panic is expert artistry? From another, more trusting perspective, this song feels more than a bit Uncanny X-Men, really: the sound of a promising talent recognizing, on tape, the sheer power of his unbridled lyrical gifts, struggling a bit with how best to control them and channel them. It’s still unclear: only time will tell how much is passion, how much pretense, whether Lamar can fashion something lasting and significant from what he presents to us as a hard-knock life, and whether a guy who thanks his samples is a guy who wants to change the world around him for the better.