Lucian Satan, Son of Dave and the Future of Blues Harp

Pushing an old and apparently simple instrument into new spaces. 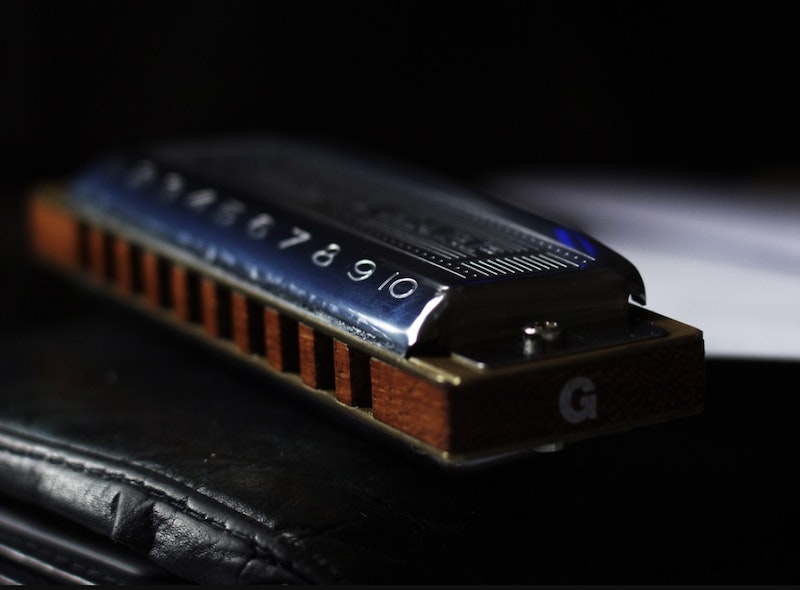 Periodically, I grow concerned about the future of the blues harmonica. I know, we've got worse problems. But the limited and inexpensive little instrument, almost a toy, has produced genius players. Straining against the limits of the harmonica (the classic diatonic doesn't even have all the notes of the scale) produces a different kind of wizardry. Charlie Parker had to master the saxophone’s possibilities, but Sonny Terry or Little Walter had to invent the harmonica, as it were, forcing it to play notes that the Germans, who invented it, hadn’t included, bending them into a mouth-crafted descent, or finding, by procedures too complex to delineate here, chords that couldn'teasily be produced on other instruments.

At this point, a harmonica, even a few notes of it, tends to register throwback authenticity, which is, for example, what Bob Dylan used it to express even in the 1960s; the notes almost didn't matter, but the timbre made a rough and rural sound, a Southern sound, suggesting street musicians who couldn't afford real instruments, prisoners alone in their cells blowing out (and sucking in) their despair, or lonesome cowboys around a campfire.

Perhaps it’s a coincidence, but several excellent albums built around the very human voice of the blues harmonica have appeared over the last couple of weeks. If it’s a trend, the “authenticity” part has something to do with it, I suspect, today's popular music built relentlessly around technologically-produced vocal effects. Since human voices are disappearing or mutating into a committee of aliens, a voice as immediate as the blues harp takes on an even greater symbolic weight.

I started playing blues harp at 13 in DC, where there was a major blues revival underway, driven by the Nighthawks and their fine harp player Mark Wenner. The band has just released a 50th anniversary album of new original songs. Wenner is the only original member (the current guitar player is my step-brother Dan Hovey). I can testify that it gets more difficult for an old man to really blow. But Wenner sounds amazing on Est. 1972: less trying to spank it maximally than making it sound just right, perhaps influenced a bit by the amazing veteran Jerry Portnoy, who’s taken the harmonica in many directions over decades.

Happy as I am to hear 1970s-era artists sounding so vital, or for example the excellent traditional harmonica thrown down on the recent collective project WildRoots Sessions vol 2 by people like Mark Hodgson, I'm more surprised by a couple of people working in a "one-man-band" vein. We're going to refer to these artists as Lucian Satan and the Son of Dave, but perhaps these monikers only add to their mystery.

Info is particularly hard to come by on Lucian Satan, who may well be a musician from Cuba named Lucian Araujo, who's currently busking in parks and pubs in Brazil. He performs extremely traditional acoustic blues on the guitar, in the vein of Tommy Johnson or Blind Willie McTell, and he sings them in English and well as Portuguese and Spanish, often accompanied by the singer known as "Priscila" or "Priscilinha" De Jesus. They sound a lot like Blind Willie Johnson, the blues preacher, and his wife Willie Green, except when they suddenly fly into a traditional Latin mode.

Araujo is one of these guys who can play the guitar, the drums, and so on simultaneously, but the harmonica is the dominant voice on the new album Nascido pra Sofrer ("born to suffer") and is either over-tracked by Araujo, or (I think) played by someone else. But it's hard to get the info. The harp work is fine, however, and gives the album its dominant throwback voice, enforcing a constant return to the traditions that Lucian and Priscilinha have somehow figured out how to access from wherever and whomever they are. It's got good looseness and a fat-ass tone, which is half the battle. And that last song has 24 views on YouTube. Anyway, I'm happy to be "reviewing" an album by street musicians who are this mysterious and this excellent, and appreciate them taking traditional blues to the street in Rio.

That gives me some hope for the hemispheric future of blues harp, but what really kills the harp geek in me is the Canadian Son of Dave (Benjamin Darvill, formerly of Crash Test Dummies). Don't be put off by the enrobed, enthroned Darvill on the cover of Call Me the King, nor by the fact that he's ordering you to acknowledge him as your overlord. Because Darvill (if it's not the unbelievable technical wizard Jason Ricci) is the current king of blues harp, and he's pushed the instrument to places it hasn’t previously gone, thereby opening up new futures. Plus I'd like to put him on a corner somewhere, in battle of the one-man bands with Lucian.

Listening to this album as a harp player is like trying to open some sort of puzzle box or solve a double-sized Rubik's cube.We have to try to figure out what instrument he's playing at a given moment. Is that a diatonic or chromatic? That's a bass or chord harp, isn't it? Is that a low F? Did he switch harps right there? Are there two harps over-tracked here or is that some kind of heroic tongue-block? Wait, is he playing a big bass harp in third position?

And then there’s the fact that Son of Dave is also singing and beat-boxing through whatever harmonica he has in his mouth. I always thought that someone could beatbox and play the harp simultaneously, but it wasn’t going to be me. Darvill's hero Sonny Terry threw out whoops and clicks even in the 1940s, maybe one of the origins of beatboxing, and the harp master Magic Dick screamed harmonically through his harp at the climax of Whammer Jammer. But Darvill, a master of the blues harp, does all sorts of things, many of which are new.

All of that is absorbing for a harp fan or a harp player, but this is also a fun, listenable, and varied album. Putting it on makes me start twitching and boogieing about the house in a manner that compromises my dignity and makes me smile. Call Me the King isn’t just a throwback, but an attempt to bring the harmonica and all its meanings, from rough authenticity to transcendent technical virtuosity, to bear on now.