Speaking the Unspeakable With Led Zeppelin

Lousy dialogue in a rock memoir. 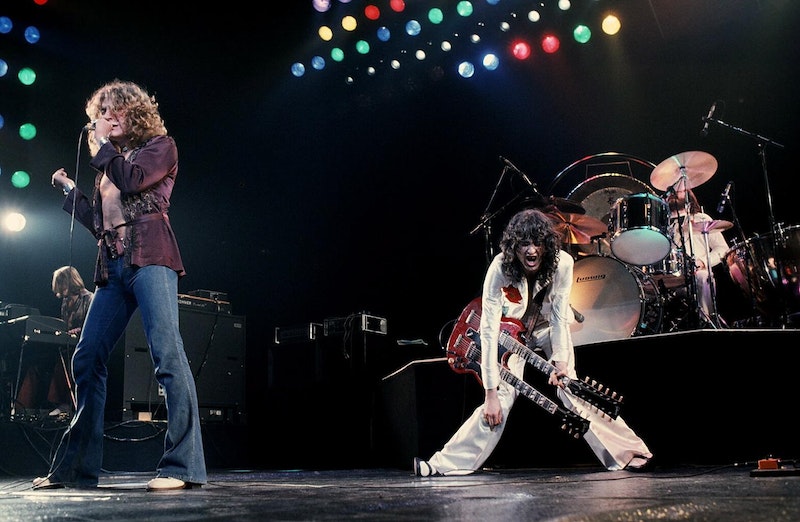 So much rock prose is dull and slow-witted, and all that flatness next to all that busy activity tends to create an effect. Consider the following statement, one that no rock star, no person, ever said: “The energy from those fans drives me beyond the point of no return.” John Bonham probably grunted or slobbered the general sentiment. But he didn’t speak those words. That kind of sentence is the kind that gets written, either by people drafting press releases or people ghostwriting rock books. Which brings us to Stairway to Heaven: Led Zeppelin Uncensored by Richard Cole “with Richard Trubo.” Cole was Led Zeppelin’s tour manager, Trubo’s the man who helped wrestle his thoughts into a manuscript, and those thoughts are quite a caution. Stairway has a lot of “she squealed” and “As a blonde in Boston told me,” plus “As she began to disrobe, she giggled. ‘This is insane.’” (Cole, reminiscently: “In those days, lots of women just weren’t timid or self-conscious about anything.”). But the lusty attributions take second billing to the book’s standout attraction, which is dialogue that no mouth could speak.

Jimmy Page, amused: “Maybe that’s the key to winning the press to our side. Let’s just stop showing up for the concerts! Our phantom performances sound a lot better to the critics!” On tour, John Paul Jones calls out, “If you spot some rednecks driving in a pickup truck with a rifle rack in the back window, take cover!” In London, a promoter gets blunt: “Peter, there’s a new band being formed in England with nearly every tick of the clock.” Overexplicitness is a problem here, an overexplicitness that’s different from the “slid down her panties” sort. I mean that information is conscientiously nailed flat, along with the sentence. Another problem, and let me repeat my previous clarification, is the dialogue’s wanton disregard for what throat and jaw can manage.

“With nearly every tick” breathes the spirit of Earl Camembert, who laboriously mouthed the news on SCTV so long ago. “Pete, every tick of the clock there’s a new band along,” the promoter might’ve told Zep’s hulking manager, the late Peter Grant. Or, going less Yiddish, he might’ve said, “There’s a new band along every tick of the clock” or “of the fucking clock.” But no, we get this trudge: “with nearly every,” etc. Oh, I suppose, it might’ve happened. Maybe the fellow had surplus energy and flashy affectations; maybe he wanted an elaborate verbal drumroll to put across his skepticism with flair. One imagines a Brit actor leaning into it, giving the thing a lot of ups and downs: “—a new band being formed in En-gland with near­-ly every… tick of the clock?” But really, no. The words could be written and/or performed, but nobody could say them.

What do you expect? That’s one charm of rock books, the semi-competent writing. It’s dim and often enough it’s uniform, unbroken. Dialogue or prose, all the stuff sounds the same and it lies in place like carpeting—let’s say the carpeting of the hallway at a Holiday Inn outside Indianapolis. The show at the coliseum ended a few hours back; dawn hasn’t come. Richard Nixon is president, a wall is smeared with Fresca and takeout cheeseburgers, and through an open door a chubby girl is crying because her clothing got totaled. The carpet isn’t much, but it won’t do anything to you and it’s there and it won’t go away. And that’s the effect of rock prose.