Riders of the Mark's "The Electronic Insides And Metal Complexion That Make Up Herr Doktor Krieg" can't be compared to any other 1960s records in its distorted ferocity. 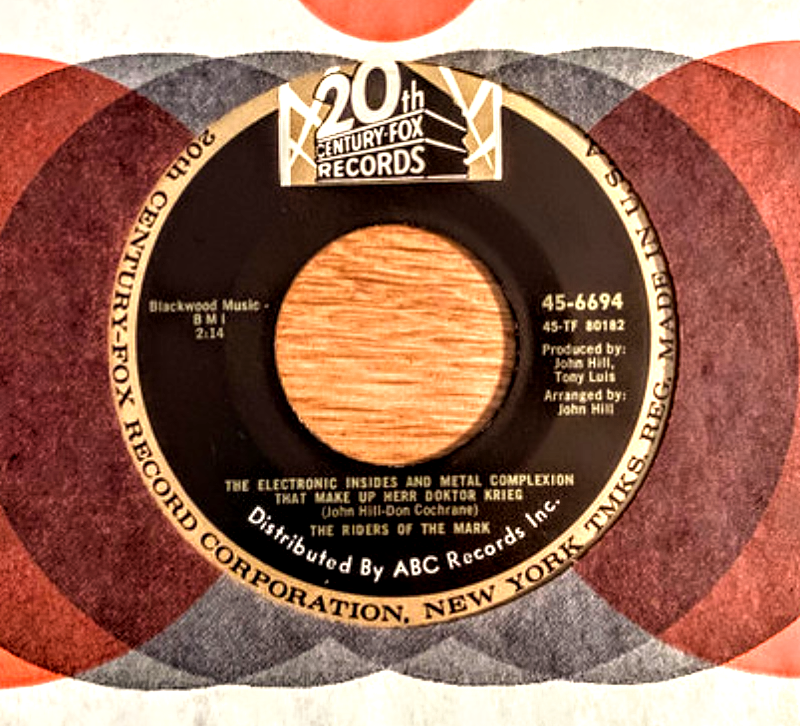 Oscillators, theremins, and other proto-synthesizers first found their way into pop music during the 1950s. Raymond Scott, Esquivel, and other exotica artists used these instruments to color their lush pop fantasies with futuristic textures and soaring melodies that reflected the post-war era’s technological innovation. By the 1960s the Mini-Moog portable synth hit the scene. Synth sounds then became standard in sci-fi/horror film soundtracks and in the more experimental works of psych rockers. Lothar & The Hand People, The Silver Apples, The Balloon Farm, The Byrds, and The Beatles had great success spiking their records with spacey analog flourish.

Nearly a decade before Kraftwerk, Donna Summer, and Thatcher-era post-punks Human League released their synth-pop touchstones, The BBC Radiophonic Workshop released the first major electronica single in 1964, a 7” featuring the theme from the TV series Doctor Who. From there analog synths soon found a home in the works of adventurous musicians. One act that utilized a synth-pop approach to create aggressive industrial rock was Philadelphia’s Riders Of The Mark.

In 1967 The Riders bashed out "The Electronic Insides And Metal Complexion That Make Up Herr Doktor Krieg" for 20th Century Fox Records. This synth-driven sound collage-meets-grunge-core monster can’t be compared to many other 1960s discs. Its harrowing electro-overload bears strong similarity to Ministry, Throbbing Gristle, Chrome, Six Finger Satellite, and countless other lo-fi synth shredders who’d form long after “Electronic Insides” was honored with far less than 15 minutes of fame.

Riders Of The Mark’s music was charged by a desire to break through mainstream pop/rock’s aesthetic barriers with sounds that symbolized a new awareness of mass communications technology and the threat of dehumanization that came with it. These themes would become dominant inspirations for The Red Krayola, The Buggles, Kraftwerk, and countless post-punk acts of the late-1970s and beyond. The track’s aggressive delivery is constantly interrupted by fluttering blips of futuristic noise. Its disorienting structure conjures images of remote late-1960s TV reports from the Vietnam War front and the often awkward space such gory chaos had to share with whimsical ad montages and political punditry. “Doktor Krieg” is a dark impression of a jaded world controlled and exploited by mass murder and mass media.

The mutant noise/junk blasted innovation of The Velvet Underground’s White Light/White Heat more than earns the right to be named one of the greatest underground rock records; it’s perhaps the single greatest avant rock release ever to come out on a major label during the 1960s. What few don’t understand about the LP is the fact that White Light found VU members Lou Reed and John Cale taking two steps backward in their music evolution. Shortly before VU formed, both artists had been employed as staff songwriters with the NYC exploito-music label Pickwick Records. The label churned out copycat albums designed to cash in on various flavor-of-the-month 1960s pop trends, including garage punk and teenbeat.

Reed and Cale were given the opportunity to pad their Pickwick releases with original compositions. The duo also wrote songs for a handful legit/non-exploito artists who were signed to the label. These noisy uptempo originals (whether performed by Cale/Reed studio entities The Roughnecks and The Primitives, or NYC area teen acts The Sassy Ones and The Beech Nuts) were some of the best mid-60s punk records to come from the East Coast.

Traces of Reed/Cale’s Pickwick punk could be heard on VU’s 1967 debut The Velvet Underground & Nico. This album’s noisy rhythm driven aspects were occasionally drowned out by pop aspirations, avant-garde classical touches, and an expansive conceptual scope. White Light/White Heat was much less versatile. The record celebrated and subverted Reed & Cale’s exploito roots. Every track (even the melancholy “Here She Comes Now”) radiates with crushing levels of distortion regardless of how “normal” or weird their melodic structures and improvisations got. They hurdle the sex-crazed bravura of “Wild Thing” and “Psychotic Reaction” into a kinky netherworld of orgies, mannequin love, hard drugs, and accidental death, a place where it makes perfect sense to repeatedly snarl the phrase “suckin’ on my ding dong” while punching the strings off of a guitar. If post-punk is the ultimate symbol of a love/hate relationship with aggro-rock tradition, then White Light/White Heat could be the genre’s archetypal peak.