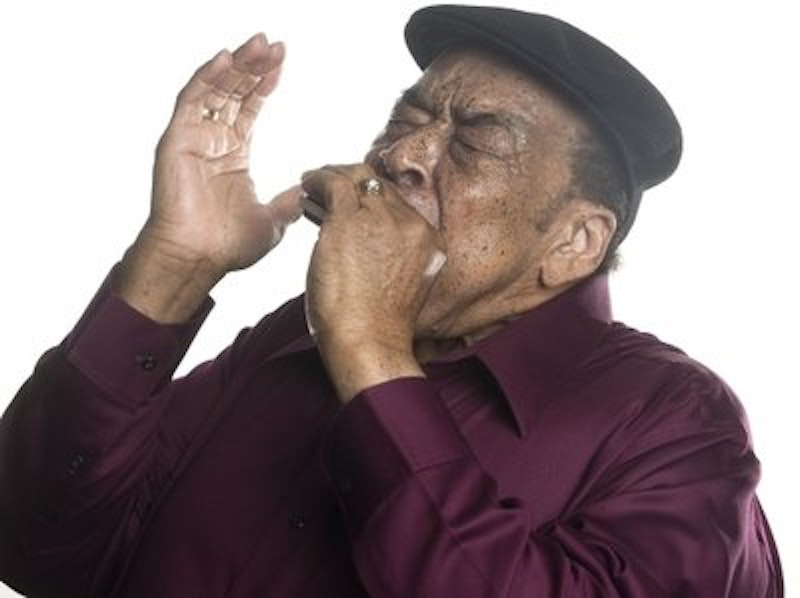 James Cotton, who died last week, was among the last and greatest of the first cohort of amplified blues harp players. These guys took the 10-hole diatonic harmonica, which was thought of as a musical toy, and turned it into something tantamount to a Strad. They played with a technical and emotional proficiency that was awe-inspiring. And man could they rock a bar.

The harmonica has many advantages. It’s inexpensive as musical instruments go. You can carry it in your pocket, but it can fill a big space with sound. It's great for busking. There's something about the timbre, too, the sound of breath across its free reeds suggesting a human voice, a hound dog, a train, a saxophone, an organ, a trombone. I hear that sound as the blues itself. The diatonic harp doesn't have all the notes of the scale, even the blues scale, but you can “bend” notes, drawing them down in a continuous analog swoop, finding notes that the maker did not manufacture the thing to produce.

The harmonica starts early in the history of the blues and keeps right on, though I worry that the tradition is fading. But a decisive moment came when Little Walter—the greatest blues harp player ever—cupped a microphone directly against his harmonica. It sounded as different as an electric guitar from an acoustic. Walter was one of the great instrumental virtuosi of the 20th century, comparable to Charlie Christian or Jimi Hendrix on guitar, Lester Young or Charlie Parker on sax. (Listen, for example, to his instrumental "Rollercoaster.") But he was doing it on a tiny instrument that cost a couple of dollars.

Walter could play many notes very fast, and he pulled all sorts of new tones out of the instrument. He also (I think) invented what has come to be called "third position," which created a wild spooky minor-key sound that sometimes doesn't sound like a harmonica at all. But what made him amazing was the groove: even in his most furious solos he appears to be reclining on the beat: relaxed, at ease, creating a vibe. Louis Armstrong often did the same with a trumpet, for example, or Ella Fitzgerald with her voice. At this point a number of players have played "Rollercoaster" note for note, working out everything but that perfect groove. Back in the 1970s, for example, Pierre G.T. Beauregard played it perfectly with the band Powerhouse, and recorded it. He told me back then that he felt like he could study it for the rest of his life and still not get it right.

Little Walter spent much of the 1950s playing in Muddy Waters' bands and on his classic recordings. After Walter left for a solo career, Muddy's band over the years introduced the world to a number of great players, including Junior Wells, George "Harmonica" Smith, Jerry Portnoy and, starting as Walter's first replacement, the young James Cotton, who’d served an apprenticeship with the great bluesman Sonny Boy Williamson (Rice Miller). When he arrived, he told Waters: "I'll never be Little Walter, but I can play." A lot of people have felt that way, but ultimately Cotton needn't have feared comparison to anyone. He had a very distinctive and rocking style that also introduced a number of fundamental ideas and innovations.

By the late-60s, Cotton was fronting his own bands, and updating the blues from Muddy's electrified Delta style to something fully engaged with contemporary soul and rock music. I wore out my copy of his classic album from 1974, 100% Cotton, and tried to learn all the riffs. I worked pretty hard and got to be a good blues harp player. But there was some stuff I never did pick out.

If you want to hear the whole kit, check out the various versions of his instrumental showcase "The Creeper" (also "Creeper Creeps Again"); it's long for a blues song on record; on stage he might extend it indefinitely or toward 20 minutes: he'd play for as long as the amazing energy held out, or until he'd sweated out all the liquid in his body. He'd throw in slices of "Sentimental Journey," "Jingle Bells," or "When the Saints Go Marching In." It took the form of a long and coherent story, with themes abandoned and re-appearing, humorous passages, the whole slowly building and unfolding through a series of variations on a theme. And it also rocked furiously. Little Walter did a lot of amazing things, but not that.

Many of the great blues harp players of those generations, and the next—Sonny Boy Williamson, Sonny Terry, Big Walter Horton, Junior Wells, Paul Butterfield, Magic Dick, Charlie Musselwhite, and Rod Piazza, for example—had an extraordinarily distinctive style, often connected to their region or history (whether they come up playing in bars, or playing unamplified in the street, for example; whether they came from the deep south, the urban north, the west coast). And people like Piazza and Kim Wilson can do Sonny Boy, Little Walter, James Cotton: they are repositories of the history of the instrument.

Magic Dick—given that moniker in a hilarious moment by John Lee Hooker—was my hero in the 70s; a white boy playing blues harp as the featured instrumentalist in a crack rock unit, the J. Geils Band. (War was another rock band featuring harmonica: Lee Oskar's.) Dick was and is an original, but I think if you listen to his unbelievable star turn "Whammer Jammer," you'll hear many echoes of Cotton. Neither man laid back like Walter; both drove the rhythm forward or pulled the band along at ever higher tempos: part of the difference between blues and rock, perhaps. They leaned forward, rather than laid back in the groove. Cotton drove the harmonica into rock 'n’ roll.

As Cotton leaves us, I worry again that the art of the blues harmonica might fade or become irrelevant: a museum piece rather than a viable instrument for playing popular music. On the other hand, we’re still producing virtuosi, for example Jason Ricci, an incomparable technical wizard and innovator. No one has ever been able to do on the diatonic harmonica what Ricci does; I've been playing for decades now and wouldn’t have believed it possible. If James Cotton threw in "Sentimental Journey," Ricci is likely to throw in some Bach, while still feeling the blues.

So perhaps the end of Cotton is not the end of the tradition. Still, I wish I were hearing more fine young players. We need more generations of masters, blowing like a blue hurricane.

Walter and After: Some Great Amplified Blues Harp Instrumentals

Jason Ricci, "The Way I Hurt Myself"