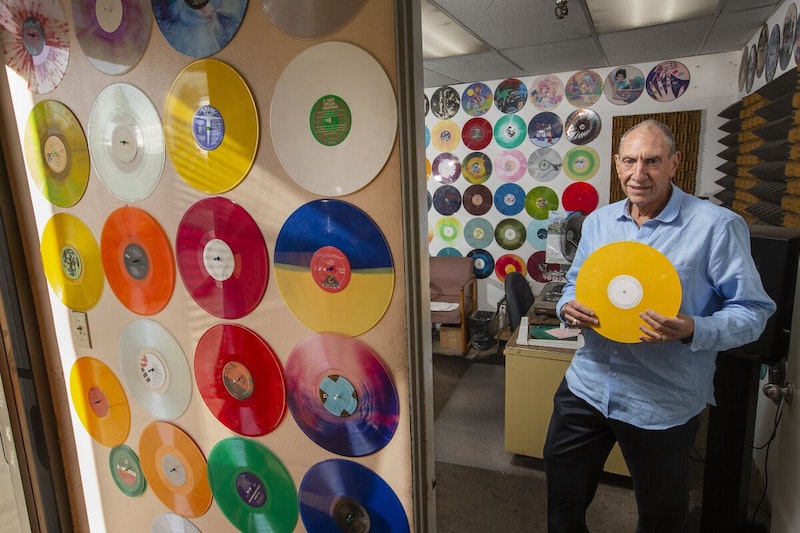 On January 30, 2020, the oldest vinyl record plant in America closed its doors. Rainbo Records was an institution. Formed in 1939 by engineer Jack Brown, their first plant was located in downtown Los Angeles. Brown created cardboard recording discs that evolved into thin flexi records. Flexi discs were used for political messages, advertising, magazine insertions and fan club mailings. They played at 33-rpm or 78-rpm. During World War II, Rainbo was commissioned by the US government to record messages on discs to be sent by families to soldiers fighting overseas. In 1954, Rainbo teamed with General Mills to press 31 million Mouseketeer records that went on the back of Wheaties boxes.

Walt Disney hired Rainbo to press the “Talking Map,” a folding poster sold at the 1955 Disneyland opening. Rainbo also made the first picture discs, records with photos embedded on them. In the late-1950s, Rainbo made miniature records for Mattel that went inside Chatty Cathy dolls. Kids pulled a string and the doll said, “I’m hungry” or “I hurt myself.” Rainbo issued the first Hollywood fan magazine (Hear, Inc.) with a picture record in each issue.

In 1955, Rainbo began pressing 45-rpm and 78-rpm vinyl discs. They moved to Hollywood in 1963 and became the backup plant for Capitol Records. They pressed 8000 records a day for performers like Frank Sinatra, Nat King Cole, the Beach Boys and The Beatles. In 1974, they moved to Santa Monica. Their peak production was in 1977 when Elvis died increasing vinyl output to 60,000 records a day, seven days a week.

Rainbo evolved with the industry. They went from mono to stereo, from 4-track to 8-track tapes. When cassettes appeared, they made them. When CDs were introduced in 1982, they replicated CDs. In the 1990s, vinyl nearly died. Audiophiles and collectors kept the industry alive.

Around 2005, vinyl began a revival. Unlike streamed music, a vinyl record is something you can touch and feel. The record jacket doubles as artwork that can be framed. There’s something exciting about removing the jacket shrinkwrap, putting the disc on the turntable, placing the needle on the grooves and listening as the music comes to life. This builds a connection with the artist as when you watch the Zeppelin III record stop spinning to see whose band member’s face appears.

Steve Sheldon started at Rainbo as a printer’s assistant in 1971 while attending college. He wanted to open his own print house after graduating, but Jack Brown convinced him to stay at Rainbo. Sheldon learned the operation from the ground up. In 1986, he was promoted to general manager. After Brown died in 2004, he ran the company outright.

In the 1970s, major record labels like Columbia and RCA owned their own pressing plants. Companies like Rainbo handled overflow and newer bands with smaller runs. Everything changed with the introduction of CDs. The majors got rid of their vinyl plants and plants like Rainbo nearly went out of business. While Rainbo once had 40 presses running 24 hours a day, six days a week, by the 2000s they were down to 20 presses. Since no one made new vinyl equipment, parts had to cannibalized from existing presses and repairs made on the spot.

The record manufacturing process hasn’t changed much. Music is recorded in a studio as sound waves on magnetic tape or digital media. The sounds patterns are fed into a computer where a heated sapphire tip cuts a continuous spiral groove into the surface of a lacquer covered aluminum disc. This disc is called the Lacquer. The groove’s a mechanical translation of the frequency and volume of sound waves. Low bass tones result in wider grooves. Higher frequencies are narrower.

The mastering studio sends the Lacquer to the pressing plant. It’s sprayed with silver nitrate and dropped into a chemical bath where nickel adheres to the disc in a process called electroplating. The silver coating makes the record conductive to electricity. The silver-coated positive disc is separated from the nickel-coated negative disc. The negative is referred to as the Master (or Father). The Master is put back in the electroplating tank to produce a positive called the Mother. The Mother is used to create a negative Stamper. The Stamper is then used to press the actual records. Each stamper makes about 1000 records.

The Stamper is taken to a record press where the A & B sides are glued to a mold. PVC pellets are poured into the press and melted at 330 degrees and formed into a malleable “puck” or “biscuit” with the consistency of bubble gum. The press closes around the “puck” at 1800 pounds of pressure and squeezes out a record as if making a waffle. The labels are molded into the vinyl during pressing. (They’re not glued on afterwards like most people think.) The records cool down and are moved to a trimming station where the excess vinyl is cut away from the sides to be recycled. Standard vinyl is 140-gram in thickness. Thicker, more durable vinyl is 180-gram or 200-gram.

The vinyl pressing process is hot, loud and smells awful. It’s not environmentally-friendly since it involves nickel-plating in large chemical baths resulting in toxic wastewater. The EPA cited Rainbo several times for not filing required reports. This is why most pressing plants are located in states with fewer EPA restrictions.

Vinyl plants work with eight different colors of PVC pellets. Customers provide a pantone number and pellets are mixed to get as close to the desired color as possible. Special mixing techniques yield starburst, splatter or marbled design records.

In 2006, Rainbo moved to a 50,000 square foot facility in Canoga Park. Vinyl sales increased every year from 2005 to the present. Still, vinyl only accounted for four percent of domestic music sales in 2019. Digital downloads and CD sales made up 14 percent of the market. Streamed music gobbled the lion’s share through some elaborate algorithm (even though Spotify remains unprofitable). Despite the “vinyl revolution,” the numbers don’t add up for record manufacturers.

In 2019, Rainbo’s landlord informed Sheldon of a 40 percent rent increase when the lease came up in 2020. Sheldon considered moving to a more business-friendly state like Texas or Tennessee. Since the move would be expensive and he was nearly 70, he closed the company. He spent the last six months informing customers and helping long-time employees find new jobs. Up until the end, he hoped a white knight would come along and save the day. It didn’t happen. The last record pressed by Rainbo was a blue vinyl reissue of Moody Blues The Other Side of Life.

Sheldon had a front row seat for the bizarre music world. He endured FBI agents raiding the plant in search of bootleg records. Punk rock artists paid in crumpled bills and pennies. In 2015, he received a call from a woman whose brother died. Rainbo pressed 50 records mixed with the man’s ashes that were given to family and friends.

In the 1980s, Rainbo became the pressing plant of choice for the rap industry. MC Hammer was one of their first customers. He drove from Oakland, picked up a few records, returned home and sold them out of the back of his car. Sheldon watched as his orders went from the hundreds to the thousands to the tens of thousands. When handling vinyl for rap artists, Sheldon made sure Crip and Blood clients weren’t at the plant at the same time. He pressed vinyl for Death Row Records and Ruthless Records and met the likes of Snoop Dogg, Dr. Dre and Tupac.

Rainbo formally closed its doors nearly three years ago. The Canoga Park facility remains dormant and is currently off market. United Records in Nashville purchased Rainbo’s equipment, memorabilia and client list. It took 14 semi trucks to haul everything to Tennessee. Only 30 or so vinyl plants remain in the country.