"Monster Mash" was arguably the first recorded “freak out.” 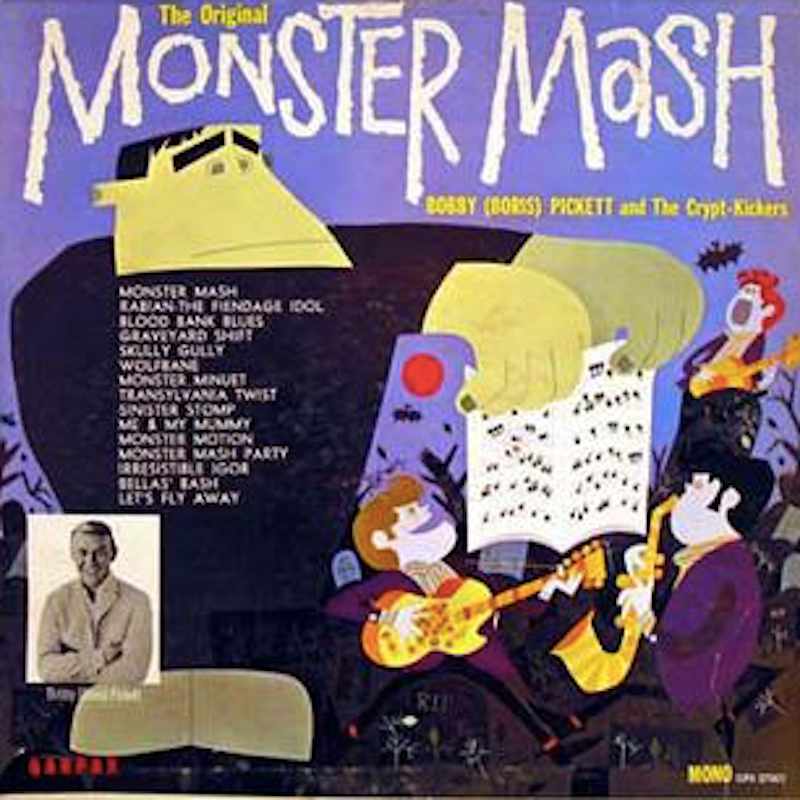 Bobby “Boris” Pickett’s “Monster Mash” was the first record I ever bought. What does that say about an 11-year-old kid who hot-foots down to Woolworth’s in 1962 to buy the single? He was into monsters, and soon would be spending all his allowance on rock ‘n’ roll 45s. But Garpax Records’ “Mash” was the first.

1962 was the culmination of a resurgence of interest in the classic film monsters, especially the Universal Big 4: Frankenstein, Wolfman, Dracula, and the Mummy. Television introduced them to a new generation. Comic books were breathing new life into old corpses, and Aurora was selling mass quantities of monster modeling kits. Bubble-gum cards depicting creatures from beyond the grave were flying off the shelves. When Pickett’s novelty song splashed down and went into heavy transistor radio rotation, the circle of horror was unbroken.

To teens raised by buttoned-down Eisenhower parents, “Mash” sounded like a grand transgression, a gathering of “others” to whom they could relate. It was arguably the first recorded “freak out.” Pickett’s (1938-2007) spot-on vocal proved irresistible to the human ear, as creepy and ultimately human as the stitched-together monstrosity Karloff had portrayed. There were sound effects—a bubbling cauldron—and a dreary recurring melody line. The song inspired a delightfully horrible dance craze.

Fear was already a pervasive theme. The nuclear age had dawned over Hiroshima only 17 years before, and subsequently chilled into a mode of mutually assured destruction. The same kids rocking with Frank, Wolfie, and Drac were crawling under their desks in futile drills. The Cuban Missile Crisis that year brought it all inescapably home; Halloween ’62 was imbued with the realization that within 30 minutes of a Russian launch vast numbers of the American populace could be wiped out.

The terrific cast that attended Pickett’s party offered a defiant empowerment, a way to get down in the face of the ultimate death-makers. Life also beckoned. Records like the Four Seasons’ “Sherry” and Elvis’ “Return to Sender” soon spun on my turntable. Pop music stars and the opposite sex became the new obsessions. Pickett’s Christmas 1962 follow-up, “Monster’s Holiday,” only climbed to #30 on Billboard’s Hot 100; “Mash,” released on September 8th, ” had risen to #1 and knocked “Sherry” out of the top spot.

By 1963 The Beach Boys had surfed in with surging anthems to summer, and the stage was set for The Beatles. Yet Pickett’s monsterific tune would reanimate on the charts twice more, in 1970 and 1973. Through Vietnam, The Cold War, Reagan, AIDS, Clinton, 9/11, Obama, and Trump, one cultural constant endured: Halloween and the “Monster Mash.”