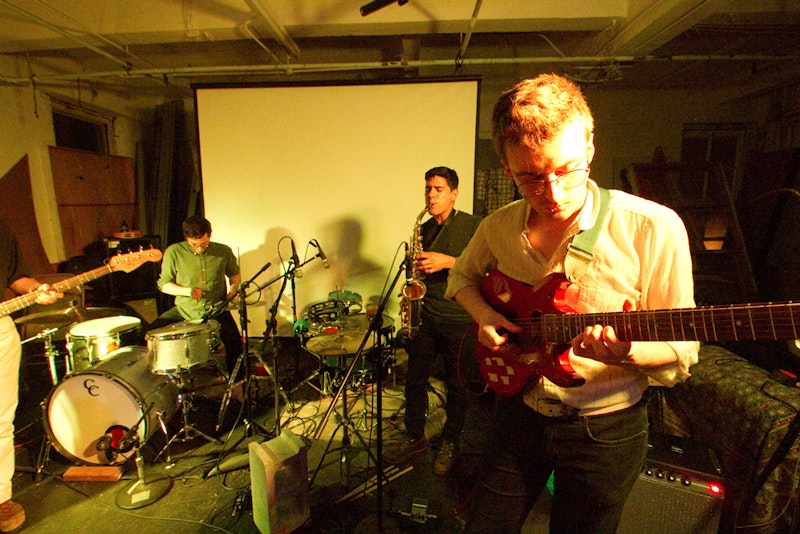 Sharing a bill with Horse Lords is a risky proposition for any band. Nine times out of 10, they’ll blow you off the stage, questioning your own music and what you’re doing. The music they make might not make it to late night TV or put them on magazine covers other than Wire, but when you see Horse Lords live, it’s impossible to deny their power and discipline: they’re one of the best bands in America and certainly in Baltimore. My brother Booker got tickets to see Parquet Courts last Saturday night at the Ottobar just before they sold out: he’s a huge fan and knows their music much better than me (I only know “Stoned and Starving,” which he says is their “Creep”—it wasn’t played that night). Singer, guitarist, and songwriter Andrew Savage said we should be proud to have Horse Lords from Baltimore, calling them “Musicians with a capital M.” There was a pause before Austin Brown, the band’s other songwriter, put his arms up and tossed this bomb: “The Ravens, though?…” And continued needling the crowd all night, explaining he was a Texans fan, “which means I hate myself.” Even blatant hostility couldn’t turn opinion in favor of Savage over Brown: the former’s terse, ultra-seriousness made everyone roll their eyes.

Priests played like they had everything to prove, and the new songs they debuted were by far the best of their set. All the choice bits came from bassist Taylor Mulitz, whose melodic bass lines and precise, tight playing kept the band going and made them more interesting than anything else. The second song, debuted that night, has a bass hook I’m jealous I didn’t write. But I felt like I’d seen or heard so much of where Priests and Parquet Courts had come from and they had little new to offer. Besides familiar and overused stage moves and personal presentations, it’s in the music. The music both bands make isn’t derivative of one band or one sound, it’s a natural amalgamation of dozens and dozens of bands, and as time goes on and the history of recorded music becomes easily accessible, the songs by new bands like this just wash together, too diverse a mix to pin down but so familiar that your eyes tune out and your brain turns off.

The main strength and appeal of Parquet Courts are the lyrics, and most everything Savage sang was unintelligible, obscured by the limitations of a club PA and his whip-crack delivery. Brown, who writes fewer songs with fewer words, is a more deliberate performer and the most endearing member of the band—if Savage had said anything about the Ravens, he would’ve gotten a bottle to the face by establishing zero good will in the first place. Humor goes a long way, and while I enjoyed Savage’s fuck you attitude at first, I later realized he’s not saying fuck you at all—he’s just humorless. “Everyday It Starts” was the highlight of their set, Brown’s brilliant and concise take on anxiety, the right mix of funny and honestly moving connection that makes a band more than another name on a bill.

But the lineup should’ve been reversed—Horse Lords are a real fucking rock band, with nothing left to say in words that isn’t covered in their silvery chimera compositions that just make you move. They pop everyone’s balloon and made the rest of the show feel a bit boring, because they couldn’t be topped.