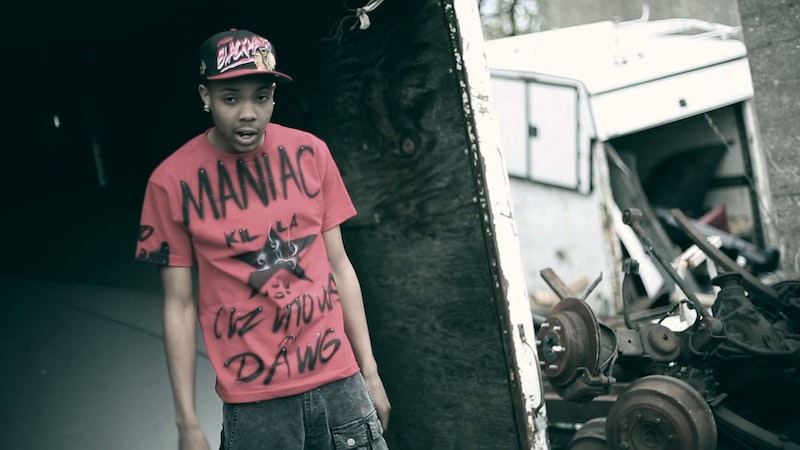 This Chicago MC’s Pistol P mixtape dropped late enough in 2014 to scan as “2015”—a 30-minute, 10-track quickie designed to generate heat for the proper follow-up to his mixtape from last year. It’s quaint to reflect on that now bygone era where the next step for emerging rappers, naturally, was an album, but Lil Herb’s next step will be another mixtape, likely followed by another mixtape. My favorite Pistol P joint, “Quick and Easy” has the intermittently stolid charge that one expects from a mixtape cut: it’s a somewhat blunted (in the non-narcotic sense of the term) representation of the artist’s ability to ingratiate, to scrape together a mood, to infer that better shit is still to come. The production, by Mekanikz, is vintage purp-dosed chipmunk soul—à la early Kanye West or prime Cam’ron—a welcome platform for Herb to heavy-liddedly montage together the halcyon, the aspirational, some disdain, some indications as to how he approaches his craft. The odd grimy, effective couplet(s) aside—I’m partial to “There’s this bitch named Karma, and she mean as fuck/Do enough dirt, watch the squad even up/I’m in the booth, it’s 5 AM, you ain’t even up”—the draw is the MC’s scarred, pitted voice, and how he’s able to lean on and reinvigorate even the most mundane or generic hip-hop tropes. Stay tuned.

There’s a lot of noise music that’s similar in theory to “Tidal Wave”—that harsh, dry pummel crowding so many disturbingly illustrated cassettes of 30 or 60 or 90 minutes in length. The first couple of seconds of “Tidal Wave” insist that it’s more of the same: heaving, distorted, raw, not quite industrial. Then you begin to notice that the heaving is rhythmic, and as you realize that, the heaving suddenly seems to be occurring at increasingly distant removes. (Listen again, closer, and the clustered, screaming scree seems more predetermined, like ball bearings striking a hollow steel enclosure.) Then it’s as though the bones have been removed from a body—a spin cycle of static pierced by feedback, but isn’t the feedback thickening? Isn’t it becoming more pervasive, more virulent? Yes, it is: and in so doing it expands into a maelstrom. What happens here—and this is quite valuable—is that the artist compels us to interrogate the art by providing something to hold onto, snatching it away, and introducing a new paradigm. Also, it sounds totally bitchin’ on good speakers or through ear buds.

Sometimes the mark of a good keeper track lies in the difficulty inherent in describing how it begins. So while all of “Western Nest” is worth your time, the opening few minutes are a pure, unadulterated conundrum. “Black Mountain,” the first and preceding track from Popeth (Glistening Examples), was nocturnal foraging as filtered through a hard drive, until it was synthesizer fireworks—something grand, ornate, and aglow from within. “Western Nest” seems to imply that what came before was a finely tuned machine, and that the listener needs to understand what it sounds like when that machine is tuned. What does it sound like? It sounds like the snoring of a cockatoo, the winding of a music box, a set of hair clippers at work, and a dog whistle, all at once, and Dilloway and Lescalleet deploy it at regular, close set intervals, with separate elements leaching away from the whole as icy drones rise gently from the deep. Eventually the composition shifts gears into a zone where the drones have a greater influence, and there’s more of a dissonance or an antagonism between two sides. As a listener, it’s not unlike undergoing an EKG where the shocks delivered are especially pronounced and—bonus—surge into your system, then out into a battery of nearly old-school decks and boards manned by masked orderlies in scrubs. Scintillating!