They may very rightfully be considered the workingman’s Pink Floyd. 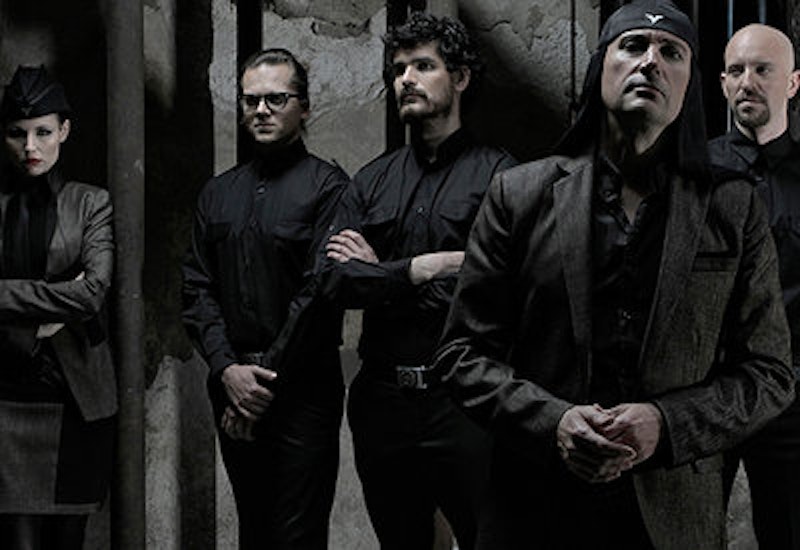 It takes a lot to get me into New York City these days. I left in 2005, correctly perceiving that the place was becoming a theme-park replica of itself, block by block. I went back briefly in November of 2011, to visit Zuccotti Park and observe the Occupy Wall Street action firsthand. I stayed with some folks in the East Village, avoided the subway, and never went above 24th Street. Aside from the Occupy experience, the visit was profoundly depressing, owing to the abundant evidence of terminal cultural entropy levelling the once-vibrant Alphabet City area. I dipped in again in 2014, on the heels of my return to the East Coast, to participate in a reunion of sorts of a select group of NY Press alumni in a tribute to the late Ned Vizzini at the KGB Bar. I didn’t even spend the night in town that time.

There are certain artists whose efforts I will always endeavor to experience, regardless of the hardships or difficulties involved in seeing them. At the top of that list is Laibach, the only band that matters.

Founded in 1980 in Trbovlje, Slovenia, a mining town and the birthplace of the Yugoslav revolution, Laibach manifests the ultimate expression of the Letterist/Situationist concept of detournement, turning the Spectacle Society’s tactic of defusing countercultural movements by recapitulation against the Spectacle Society itself. Through the skilled manipulation of totalitarian imagery, Laibach established an unparallelled ambiguity of image so successful and challenging that, in America, where audiences are nearly completely ignorant of art history or foreign languages, neo-Nazis showed up at their concerts expecting to be celebrated but found themselves mocked, often completely unaware that they were being mocked, whereas in Europe (Germany, specifically), neo-Nazis set fire to their stage, quite aware that their cherished kitsch imagery was being turned upside down and inside out. In 35 years, the members of Laibach have never broken character. Indeed, there may very well be no “character” (i.e., “artifice”) to be broken.

Prior to 2004, Laibach’s imagery was derived from Soviet, Nazi and Italian fascist sources mingled with such Entarte Kunst as the works of John Heartfield and Kathe Kollwitz. The juxtapositions were intensely unsettling. While they were among the very first “industrial” bands, over the years they have established themselves as truly trans-genre, as capable of hip-hop as of orchestral symphonics, and forever capable of surprise. The “Divided States” tour of 2004 utilized American imagery for the first time, grafted seamlessly onto the retrograde totalitarian esthetic. Apparently, the USA has arrived.

I took a NJ Transit train up to New York. Aside from flying, I haven’t used public transportation in ten years. I won’t do it again. The trains were clean and ran on time. The NJ Transit staff was friendly and competent. It was cheap, just $17 from South Jersey to Penn Station. There was nothing at all wrong with the system. It was the other passengers, and the horrible crackheads and tweakers that hang around bus and train stations to annoy people and rip them off. I’m way too misanthropic to get into close situations with idiots. On the train, I was incredibly grateful for my phone and the wi-fi. There are definitely times when looking at pictures of cats and arguing with people on Facebook is better than paying too much attention to what's going on around you. The use of distraction as therapy relies entirely on context.

The bros and the bimbos are a troubling cultural phenomenon. The very shallow end of the pool is crowded these days. Walking down Seventh Avenue to Chelsea, youngsters with their faces glued to their phones kept walking into me, an old guy using a cane. Most of them were attractive young women, so it really wasn’t too bad, but it was unsettling. I stopped at the Triple Crown, across the avenue from 333 Seventh, the old NY Press offices. I had a shot of Jack Daniels and a bottle of Bud for auld lang syne and smoked a few cigarettes. There seem to be a lot more Cirque du Soleil characters on the street these days, the flamboyance factor is way up in this blood-soaked century, which is good. The city smells like Febreze, which is plain weird. The phone drones are awful. I want to paste “KICK ME” stickers on the backs of people texting or surfing while they’re walking on a crowded street.

I got down to Chelsea without incident and hooked up with my hosts. I’ve known them long enough to respect their privacy. I hung around their place drinking and smoking pot, smoking cigarettes outside like we do these days, and occasionally venturing out for a short walk. New Yorkers are still better looking than other people. They tend to be fit because of all the walking they do. I’m wary of the NYPD these days, but I’m an old guy with a cane and I’m not black, so they left me alone. I’m good at eye contact, so the skells tend to leave me alone.

Tuesday night rolled around, and I made my way over to Gramercy Park to meet my buddy Fitz. Seeing that Live Bait was still around, I couldn’t resist dropping in for a couple of Pabsts. The place is a marvelous replica of a Southern roadhouse. It first opened in 1987, and my late wife and I loved the joint. The food is terrific and the atmosphere is great, no pretense, and it’s eminently affordable.

Fitz showed up, and we hiked down the block to the Gramercy Theatre. It’s a venue with a rich and varied history, most significantly as a 490-seat off-Broadway house. Live Nation acquired it in 2004 for use as an “intimate” showcase for bands and comedy acts. This is Laibach’s first affiliation with a corporate promoter. I’ve seen every American tour since 1992, and their previous expeditions here have been under the auspices of independent promoters. They’re also engaged in a shameless Indiegogo campaign to raise funding for the tour: for $10,000, you can join the band. For $300, you can meet them. This is a consistent extension of their absurdly extensive range of merchandise: chocolates, teddy bears, neckties, belts, stamps, passports and even condoms (labelled “Anti-Semitism”). The extensive mockery of commodification and consumer culture dovetails elegantly with the totalitarian collectivist construct. The new relationship with Live Nation and the uniquely twisted idea of letting people join the band for $10,000 leads me to believe that they’re going all-in with it, either cashing out or taking it to the shed/stadium level. A Laibach stadium show would be uniquely terrifying, like a Nuremberg rally on acid.

The show was stunning. They work with a very small kit, relying largely on house sound and house lights, but they bring screens and projectors and make excellent use of them. They did a two-hour set with a brief intermission. The first half was new material, some as yet unreleased and some from their 2014 opus, Spectre. Spectre is their most open and least ambiguous work to date. It directly addresses America’s current imperial overreach, end-stage capitalism, and the inherent fragility of tyranny. It celebrates Snowden, Manning and Assange, as well as all whistleblowers everywhere. It is a tribute to resistance as offered by the Borg, a collectivist homage to the power of the individual. The second half of the set consisted of material from 2003’s WAT and other earlier stuff. At all points, their instrumental virtuosity and range elicits comparisons to Pink Floyd in that wild minimalist experimental period between Syd Barrett’s meltdown and the ultimately poisonous commercial success of Dark Side of the Moon. Laibach may very rightfully be considered the workingman’s Pink Floyd.

After the show, Fitz and I parted company and I hopped a cab back to Chelsea. The next morning I took the train back to South Jersey. Sartre was right: Hell is other people. I’ve known that for decades. What I’d like to know is why New York City smells like Febreze. When did that start? I think I know what it means.