Nobody should bless Robert E. Lee. 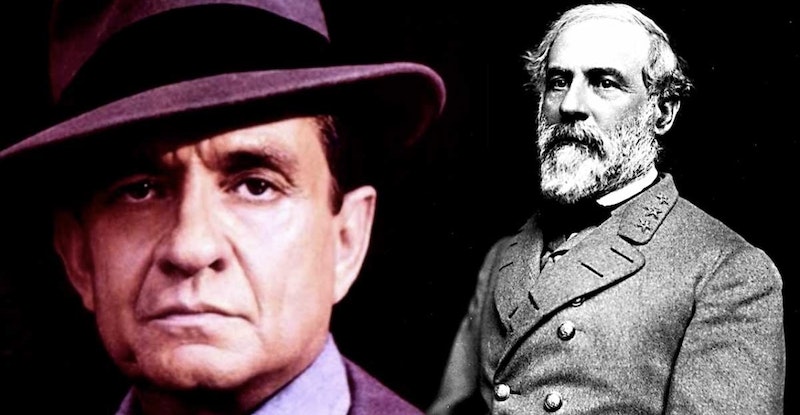 In his 40-plus year career, Johnny Cash had his share of low points. But one of his all-time worst songs was “God Bless Robert E. Lee,” released in 1983 on the otherwise critically acclaimed Johnny 99.

As the title indicates, the track is a maudlin tribute to Robert E. Lee and the Confederacy. It starts out with a talk-singing recitation, in which Cash praises Lee for disobeying Jefferson Davis’ orders and surrendering to save lives. “So this song is not about the North or the South but about the bloody brother war,” he declares. “Brother against brother father against son the war that nobody won. And for all those lives that were saved I gotta say God bless Robert E. Lee.”

That sounds conciliatory. But if you think about it, and listen to lyrics like, “I won't ever stop loving you, my Dixie/'Til they put me in the ground,” it’s clearly a pro-Confederacy stance. There were people who won the war; they’d been enslaved, and during the war they seized their freedom. The heroes of the conflict weren’t the slavers who lost. The heroes were the people (a lot of them Black) who fought successfully against an evil police state which ran the South as a giant gulag. Lee fought for a cruel, immoral cause; he’s not a hero because he failed. It’s like singing “God Bless Adolf Hitler” because Hitler bravely put a bullet in his own brain.

Cash generally isn’t associated with white supremacist apology. Most of the political causes he championed during his life were progressive and noble. He recorded a number of concerts in prisons to bring attention to the plight of the incarcerated and the evils of the criminal justice system; Mariame Kaba, a leading prison abolitionist, has praised him. His 1964 album Bitter Tears was about the dispossession and exploitation of Native Americans. Cash doesn’t ask God to bless General Custer. As Cash’s children wrote in 2017, Cash was a “man whose heart beat with the rhythm of love and social justice” and whose “pacifism and inclusive patriotism were two of his most defining characteristics.”

That statement was issued following the neo-Nazi rally in Charlottesville, in which the far right protested the removal of Confederate statues and murdered a counter protestor. One of the white supremacists reportedly wore a t-shirt with Cash’s face on it. His children wanted to make sure the public knew that Cash would’ve been repulsed to be associated with white supremacists. Hate, they insisted, is not his legacy.

Cash would’ve been repulsed. His own family was targeted in a hate campaign by the KKK when white supremacists saw a picture of his wife Vivian and decided that she must be Black (DNA testing and history research in 2021 revealed that she did in fact have an enslaved Black ancestor).

But you can also see why pro-Confederate assholes might feel like “God Bless Robert E. Lee” was speaking to them with some sympathy. It’s a Southern pride song that presents the fight for slavery as a noble lost cause, and erases Black people’s experience from their own freedom struggle.

Cash was working in a country music genre that often trumpeted Southern white regional pride and he was singing for a mostly white audience that had sympathy for the Confederacy. He tried to finesse that, by making Robert E. Lee a symbol of unity rather than division. But you can only unify around Lee if you ignore the history of violence against Black people—and ignoring that history is generally a prelude to repeating it. Lee’s heirs are the racists who rioted at Charlottesville. Cash’s heirs are not. But sometimes just about everyone picks the wrong hero.