Religion, possession, and exorcism have been immortalized on records for well over a century. 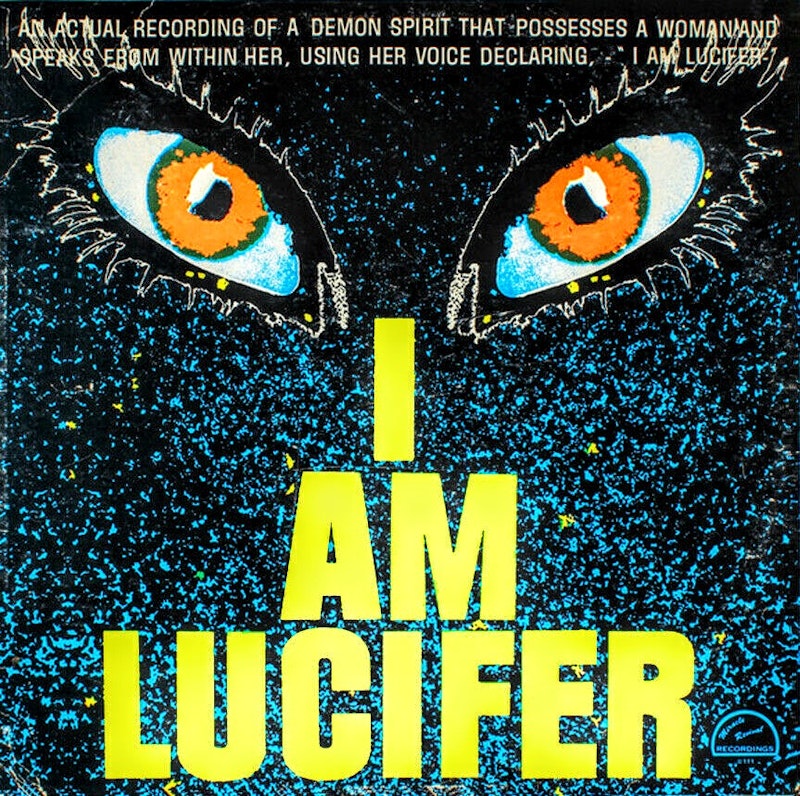 Religious testimonials, sermons, ceremonies, and songs have been immortalized on records since the dawn of audio technology. Initially these were created to highlight religion’s positive effects. After World War II that clear purpose became diluted as a new strain of religious recording emerged that was closely related to horror films and scary radio shows like Lights Out and Inner Sanctum. These were exorcism records—sonic documents purporting to feature the agonized voices of humans under Satan’s spell. Such releases were produced to educate the public about demonic possession. These audio spectacles also served as propaganda. Sensationalism and shock tactics were used to scare the public into the arms of the Christian God.

Some of the genre’s big moments include The Reverend T.L. Osborn’s The Demon Possessed Boy (1960), The Reverend Patrick J. Berkey PhD’s 1974 docudrama LP The Rite of Exorcism, and The Exorcism Tapes. Though not released until 2016, Exorcism Tapes is comprised of mid-1970s recordings made by Catholic exorcists Ernst Alt and Arnold Renz at the tragic exorcism of Anneliese Michel. This young German woman’s violent possession inspired several films including The Exorcism of Emily Rose (2005). It also inspired a widely publicized lawsuit. Michel died during the ritual and her family blamed Ernst and Alt for her death. They sued the exorcists and both were convicted of manslaughter.

For those who worship at the church of science and logic, a common explanation for demonic possession is insanity. Possession is seen by many therapists and psychiatrists as a delusion caused by schizophrenia and other mental problems. During the 1950s and 60s the Pentecostal preacher A. A. Allen and his Miracle Revival Fellowship faith healing ministry created the scariest exorcism records of all, I Am Lucifer (1964) and Crying Demons (release date: unknown; it probably also came out in the 60s). These were live recordings of Christian tent revival events where exorcisms were performed before massive audiences. Allen held a unique view of the relationship between Satanic forces and mental illness. Evidence of this comes out in a crazed sermon included on Crying Demons:

“Today the psychiatrist is sending most of the cases to the preachers. Amen! At last the psychiatrist has awakened to the fact that The Devil has something to do with the physical torment of the thousands of people that line up in their office day after day!… I’m gonna see that you get a shock treatment!… GOD’S SHOCK TREATMENT! [the crowd goes wild]… I’m not talkin about shock treatment from electricity and sponges and a wet towel where you have to be strapped on a table where it jerks ya to pieces and drives ya wild and insane! I’m talkin about The Holy Ghost of fire that God sent down!...”

The demonic humanoids growl and snarl, moan and cry, threaten and insult, spit and drool as Allen mesmerizes them with all the Heavenly fury he can muster. His screaming, nasal Southern drawl often sounds scarier than the twisted people he’s trying to save. On I Am Lucifer the preacher confronts an unhinged young woman from New Mexico who gives voice The Devil’s most destructive obsessions:

Possessed woman: “I WANT THIS WOMAN FOR THE WORLD AND NOT FOR GOD.”

A.A. Allen: “YOU CAN’T HAVE HER! If I have to, I’ll wrassle you til sunrise… Why did you pick this particular woman? You like brunettes? I’m talkin to you Satan!”

Another disturbing moment from Crying Demons centers around Allen’s grotesque descriptions of an exorcism: “One man in Los Angeles, we cast a certain type of demon out of him. Nobody hurt him, he was not injured, but when it came out he bled at the mouth. Blood all over his shirt. He said, ‘Brother Allen, I’d like to have tore my shirt to pieces.’ Blood all over his shirt. That’s biblical and scriptural(!).”

The most chilling part of these recordings comes in thick layers of jittery audience-generated background noise. The buzzing ambience washes over the reverend as he struggles to rip the demons from victimized mortals. It’s a dense symphony made from overwrought crying, gasping, nervous mumbling, screams of fear, screams of joy. It’s the sound of the faithful exorcising their own demons, a tide of neurosis that ebbs and flows with the chaotic action onstage. It feels like an angry mob about to riot. You can almost smell the sawdust on the ground and see the sweat drenched crowd steaming up the big tent as A. A. Allen conjures up a hellish intensity.

Tent revivals were popular from the 1800s to the 1960s. Their big support base came from America’s deep south and other rural areas where Bible thumping/”fire and brimstone” Christianity reigned over impoverished, uneducated populations. These events fueled a robust economy connected to tithing, the sale of souvenirs, charitable initiatives, and they even served as transient social centers complete with concession stands, meet-and-greets, and other recreational accoutrements. They were similar in tone to rock concerts, pro-wrestling events, comic book conventions, and other secular/socially driven entertainment spectacles.

Most Christians take a negative stance on exorcisms, faith healing, speaking in tongues, snake handling, and similar phenomena. They view these spectacles as acts that are just as blasphemous as the devilish powers that Allen’s ilk claims to fight against. Bearing that in mind, it seems like the Miracle Revival Fellowship may have been cursed by The Devil himself. The outfit was hounded by bad luck and trouble beginning in 1970. That year A. A. Allen was found dead alone surrounded by booze and pills while crashing at San Francisco’s Jack Tar Motel. The full story of his life and the painful decline of his ministry adds an extra grim layer of context to an already bloodcurdling pair of records.

—More details on A.A. Allen’s work and sound clips from his exorcisms can be found here